We recently had another installment in the series: tough math question that provoked a lot of hand wringing in the UK: crocodile maths. I'm linking to the Aperiodical because (a) those folks are awesome and (b) that's where I first read about the problem. If you want to see the worked solution, that's your destination.

The rest of this post is my comment to the article, making a point that I fear I will reference again and again.

My issue with this problem is that it tries to embed some math into a “real world” context, but then actual knowledge of that context is in conflict with the math. In this case, there are two conflicts.
First, the crocodile can probably swim faster than it can move on land. They are animals that spend most of their time in the water and are great swimmers. For very short bursts on land, they can also move quickly, but 12m seems too long for one of these short bursts. Also, short land sprints are rare and most footage of crocodiles moving on land shows them going quite slowly. FWIW, there are web references to land speeds of 11kph and swimming speeds of 18 kph or higher (though see below for a caveat on this one).
In any case, given that knowledge, the student’s intuition will be in conflict with the dictated model and should tell them that the crocodile swims the entire distance.
Second, and more importantly, this model is not consistent with the crocodiles’ attack strategy. They don’t make long, wild dashes after prey. Instead, they make use of stealth and patience. The crocodile in this scenario would swim slowly underwater, get as close as possible without detection, and then launch itself out of the water over a short distance. Better yet, the crocodile would already be waiting near the drinking spot, taking advantage of its ability to stay submerged and wait for a very long time.
Because stealth is such a key, it is rare for them to need to swim as fast as possible in the water, hence our lack of clarity about what their maximum swimming speeds are. Contrast with cheetahs, for example, where there is a natural situation in which they need to demonstrate their maximum running speed.
I’ll throw in a third objection: crocodiles and zebra aren’t really part of the “real world” for those sitting the Scottish higher math’s exam. It sits in a strange and uncomfortable third universe that isn’t mathematics and isn’t the actual real world. Perhaps the best name for this odd place is “home of maths word problems.”
Finally, if anyone wants to see a version of the concepts in this problem done well, Dan Meyer’s Taco Cart is the way to go: http://blog.mrmeyer.com/2012/3acts-taco-cart/
Posted by JGR314 at 10:46 AM 3 comments:

A loop-de-loop mash-up and some extensions

We had an idea to combine Anna Weltman's loop-de-loops with one of Vi Hart's doodle games, making a knots/doodle braids: 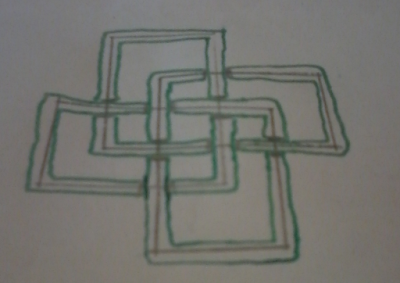 Questions from our noticing and wondering about these:

Another set of ideas were inspired by John Grade & his daughter, the winners of Dan Meyer's loop-de-loop contest:

Their loop-de-loop was made using the digits in the decimal expansion of π as the step sizes. I think there were 49 digits used.

The immediate question was, why 49 digits? That led us to create a (not entirely successful) program that allows us to choose how many digits of π to use to generate a loop-de-loop. Of course, this quickly led to a second extension: what about other irrationals? For now, our code will let you choose whether to use π or e as the reference. The code is here.

Playing around with these a little, we came up with another extension.  Instead of a single loop-de-loop, consider a family of loops-de-loop {Fn(α)} where the n-th element of our family is the loop-de-loop generated by the 2n+1 terms of the decimal expansion of  α. Here are our questions about these families:

Take us to another world

One last idea was to think about drawing on a surface that isn't a flat plane. In order of interest:

Go back and watch the Vi Hart video again (the link, for your convenience) and make sure to play those doodle games and think about all the connections. It has to be one of the coolest things ever and is well worth taking the time to appreciate it.
Posted by JGR314 at 8:24 AM No comments:

Like many mathy families and classes in the past couple of weeks, we've been playing with Anna Weltman's Loop-de-Loop patterns.

Note: to give credit where it is due, my introduction came via Mike Lawler's blog that linked with Dan Meyer's blog. 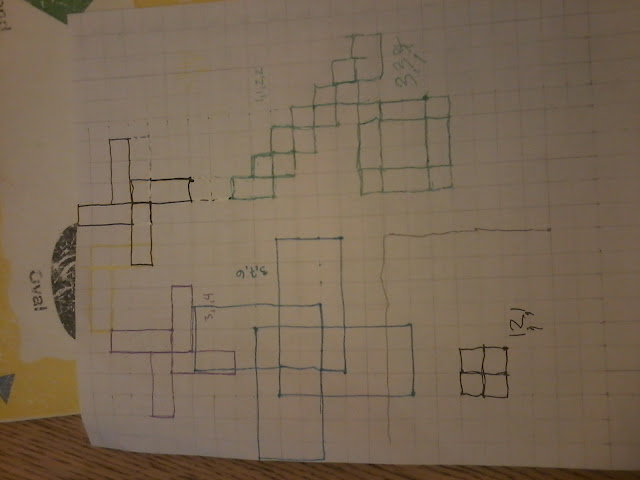 As you can see from the picture, that led quickly to their own questions:

Ahead of introducing this to the J's, I had made a short pencilcode program to automate drawing the loops-de-loop: Draw a rectangular loop-de-loop with your choice of step lengths

This let us easily try many different combinations of step lengths and build up our menagerie very quickly. As usual, the kids came up with ideas that wouldn't have occurred to me. These are behind some of the challenges below.

For each of the following, what sequence of numbers defines the loop-de-loop pattern we created?

Our favorite, so far 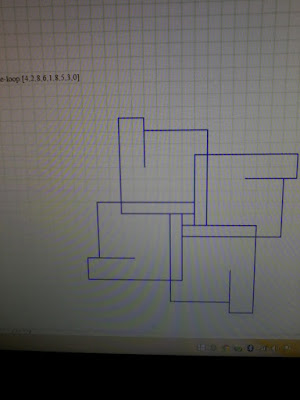 Apologies that it has taken me so long to post. We are on break between terms right now, which actually means I have less time than usual!

We played an extension of damult dice with the third grade class during the last week of classes that was very successful. Here is the quick story:

First, we played a round of the standard game, with a point target of 200. Every student had a chance to roll 3 dice, add two of them, then multiply the result by the third. At one point, on my turn, I had 124 points and the kids had 199 points. We stopped and I asked what they thought would happen. They quickly saw that I had no chance to win.

Next, we drew a card from a playing deck. In this case, it was a 5. Based on that draw, we then played damult dice again, but players are only allowed to count points that are multiples of 5. To soften this additional constraint, we added a fourth dice. In other words, players throw four dice, choose two values to add together, and choose a third value to multiply by that sum. If the result is a multiple of 5, they can add those points to their running total.

For the next game, we chose a different card to determine the multiplication family for that round.

At the basic level, this variation made the game a really good way for the kids to practice their multiplication families. To focus the practice, I had actually doctored the playing cards ahead of time and took out many of the cards (face cards, 10, aces, and 2s).  For other student groups, I might take out the fives or the threes, if they were already very comfortable with those families, or I might include the twos and tens if they needed more work there.

Their observations were great

During play, the students quickly launched into observations and hypotheses about how to make use of their new degree of freedom (the extra dice) to overcome the constraint. For example, they realized that the only multiples of 5 possible are where one of the factors is already a multiple of 5. That means (a+b) * 5, a+b = 5, or a+b = 5. They had different observations when looking for multiples of 6 and again for multiples of 8.

These conversations became a natural step into thinking about the factors of our constraint and, even better, the prime factorization.

For the class, we chose one multiplication family for each complete play of the game.  In subsequent play at home, we've tested two other versions. In one version, the player starts her turn by drawing a card, then needs to score points that are a multiple of that card's value. This adds a further element of randomness to the game as each player potentially faces different constraints on their turn.

Alternatively, we drew one card to constrain the next two turns. In other words, each player faces the same constraint as the other, but the multiplication family can change between a complete set of turns.

My recommendation is to be flexible and try the version that suits your players the best. I think the first version is my favorite for encouraging the players to really think about what is required to make a point value that is a multiple of their specific constraint, to make observations and hypotheses.