If anyone is in Bangkok this week, here is the flyer for the open house for our new school building: 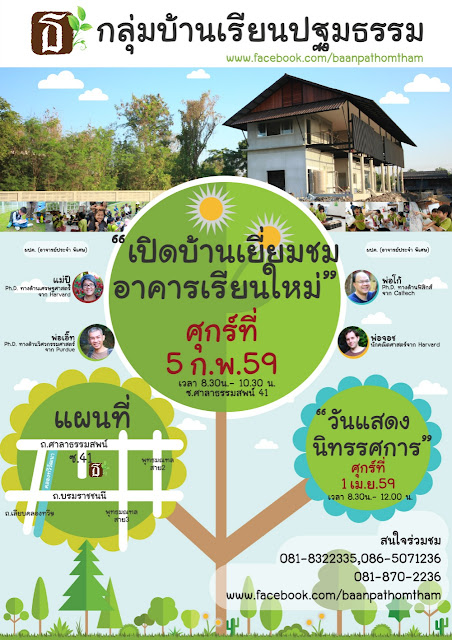 On a recent errand, I was reminded of another wonderful Bangkok "intersection" between Ratchaphruek and Nakhon-In. I use the word "intersection" loosely, since these two roads don't actually touch directly.

This actually is a cool intersection to drive through, assuming that you are only planning to go straight through, especially driving straight on Ratchaphruek through the <hint>underpass</hint>. 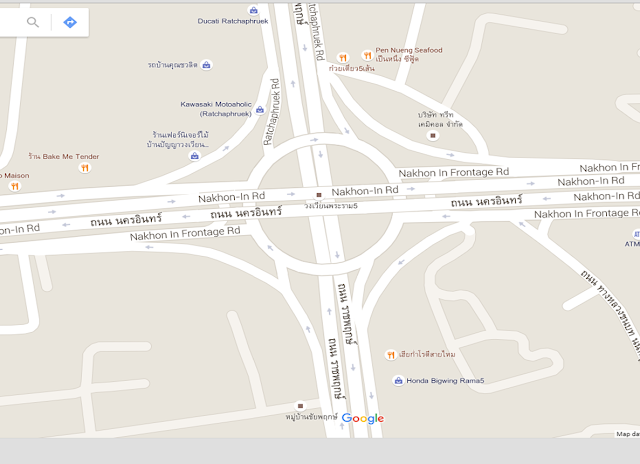 Here is a link to the location on Google Maps: intersection2. If you want to answer my questions about the intersection (what does the graph look like, how many transitions are possible, etc), you probably need to go to the interactive map. Frankly, I'm not even sure I included all of the relevant pieces in the picture above. This is one of the charming features of intersections here: sometimes, you have to prepare well in advance of clear signage and may find that you've gotten stuck and can't cleanly make the desired transition.

How many ways through the intersection?

Here is a "typical" intersection between main commuting roads in Bangkok: 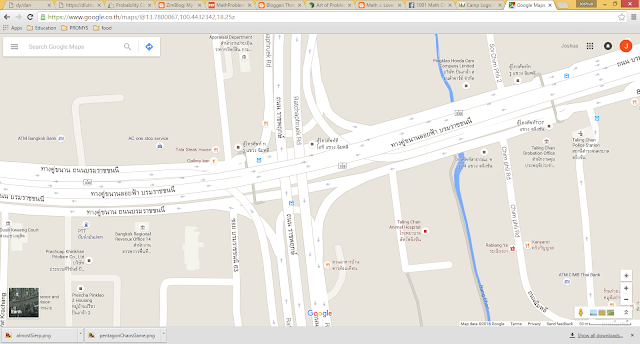 I use quotes because it has a typical level of complexity, but almost every intersection is structured differently. Apparently, the civil engineers here wanted each interchange to be its own special little snowflake. One implication is that, for the drivers, it is very difficult to correctly navigate through the first time you encounter a new interchange. Also, if you are used to one transition through the interchange, you may be completely lost coming from a different direction or leaving a different direction.

Your mathematical challenge, should you accept it:
Count how many ways there are to go through this interchange

It might help to draw a diagram that abstracts the roads a bit, but makes it more clear. At least it will make it more clear to me what you've gotten wrong when I go to correct your work!
Posted by JGR314 at 6:23 PM No comments:

Random 100 board and some subtraction review (math games)

In grades 1 and 2, we (re)introduced the card subtraction game from one of our earliest classes.

Since this is our first class of the new (calendar) year, we also did one of the calendar tricks again in all of the classes (the first one on this page).

Repeating activities is something that we rarely do. Usually, we have been introducing a new game or activity each class, possibly following up on that activity in the following week. However, we realized that it takes more time for the kids to extract all the ideas or practice. Also, since these things are often still challenging, their interest level is high.

Four in a row

PK came up with this game, but it is based on an idea she saw elsewhere. If we recall the original source, I'll link to give it credit.
Players: 2
Material: randomized 100 board (we used 0-99 randomly arranged on a 10x10 grid); 4 dice (we used 4d6)
Turn: Player throws the dice, then combines the values using arithmetic operations to create a final result. They mark the corresponding cell in the grid with their color.
Winning: The first player to get four adjacent cells in a straight line wins (NB: diagonals also allowed)

We also asked the kids to write down their number sentences for each move, below the playing grid.

Here are the 4 grids we used (random order created using pencilcode similar to the 6th graders final assignments last term!) There's nothing magical about these, but we wanted to mix up the "easy" and "hard" numbers as well as give some additional variation for each play.

We started the new year with some exercises that refresh several of the concepts we've been covering:

We haven't done very much with coordinates, so this is probably the part that feels the most "new." By this point, loops should feel reasonably familiar and, in the code today, we aren't doing any complicated or nested loops. The use of arrays is still difficult; these objects are a tricky beast for the kids to fully understand.

Our first challenge is to get the turtle to jump halfway from where it is standing to a target point. For this, we recall the getxy() function and use the xy-coordinates for the screen (the home where the turtle starts is (0, 0) in this system). Here's an example:

Using this basic code, we can reorganize things a bit to play the Chaos Game and generate an amazing picture. In each iteration, we randomly select one vertex, then jump halfway to that vertex, leave a dot, then continue:


This version already has a nice little twist with the random colors on each new dot. Nice!

Finish the challenges from the class (including writing explanations of the lines of code we highlighted) and then modify the last program to create your own picture. Here's an example of something I created: 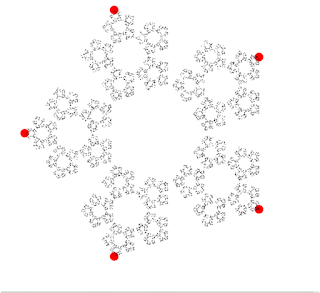 A slightly different version is here: <a href="https://jgplay.pencilcode.net/edit/Math/Fractal3">more Fractals.</a>
Posted by JGR314 at 7:18 AM No comments:

During a hike in the south, J1 tripped and cut his forehead badly. This incident lead to the following conversation snippets and math observations about taking medicine.

J1 has to take three different pills, a white one, an orange one, and a cream one. How many ways can he take them? 6, of course, 3 choices for the first, 2 for the second, and then whatever is left at the end. Follow-up: why do we multiple the choices instead of adding them?

However, our answer is 12. The twist is that one pill is broken into two halves because it is so big. That means we have 4 pieces, so 4! ways of arranging, but two pieces are identical, so 4!/2 distinct ways of ordering the pieces.

For those who are more advanced: what if we allow taking more than one pill at a time?

Cut in half and comparisons

As noted above, the white pill is pretty large, 375 mg. We break it in half, so how large is each half?
The next largest pill, the orange one is 25mg. How many times larger is the white compared with the orange?

Sorry to disappoint you, if you are looking for pictures of the wound. It really is too gruesome to spring on the math lovers of the internet.

Not our favorite ten frames: 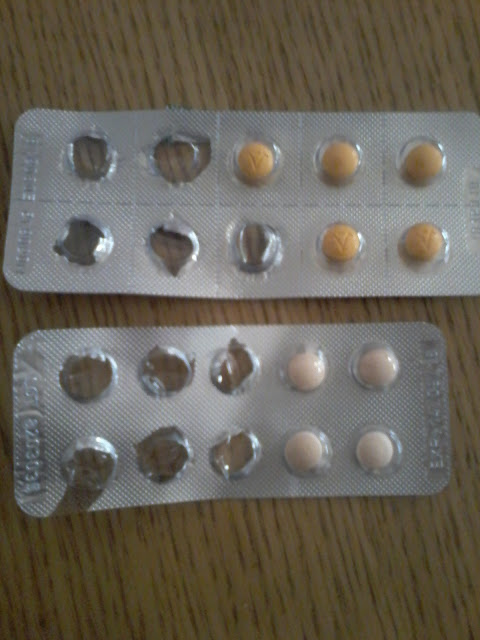 Which sequences of pattern blocks close up? 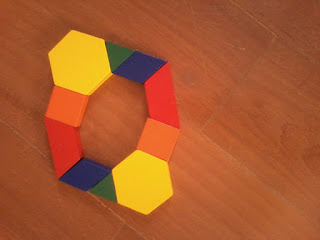 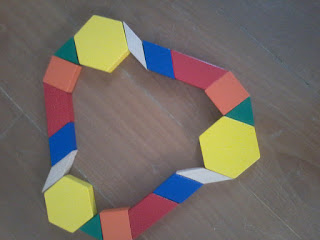 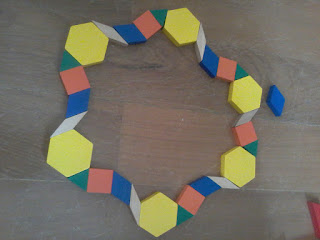 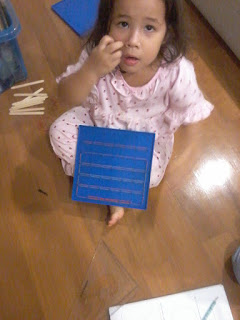 Saw this tweet and did a short investigation with J2. 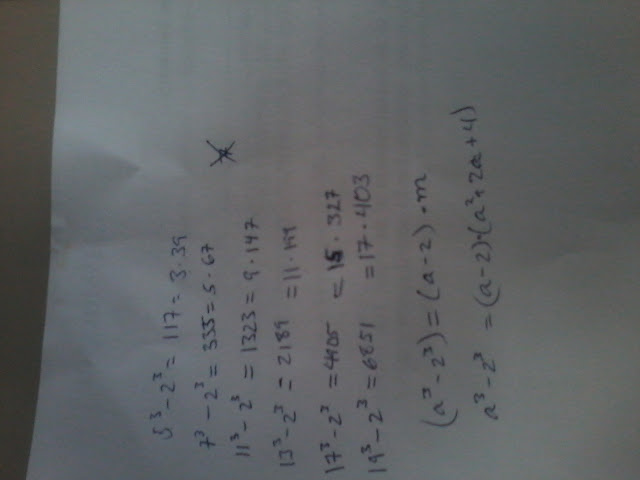 Some investigations by J1 today, questions that came up while we were playing Munchkin. Note: this just uses the basic set, no expansions.

What is the most powerful character?

There are a collection of restrictions, for example characters only have two hands, some items can only be used by certain types of characters. As a result, we thought this would be a challenge involving a lot of trade-offs and some difficult decisions about which class (wizard, thief, cleric, warrior) and race (human, halfling, elf, dwarf) would work best. However, almost all of the decisions ended up being straightforward.

As with everything in Munchkin, this investigation led to some discussion about rules. In particular, is a hireling allowed to wear items (armor, headgear, etc) or just hold one? Of course, it also made us ask for our own investigation whether we count the hireling +items in the character's fighting strength?  Our answers: hirelings can only add one extra item but the associated bonuses do count. 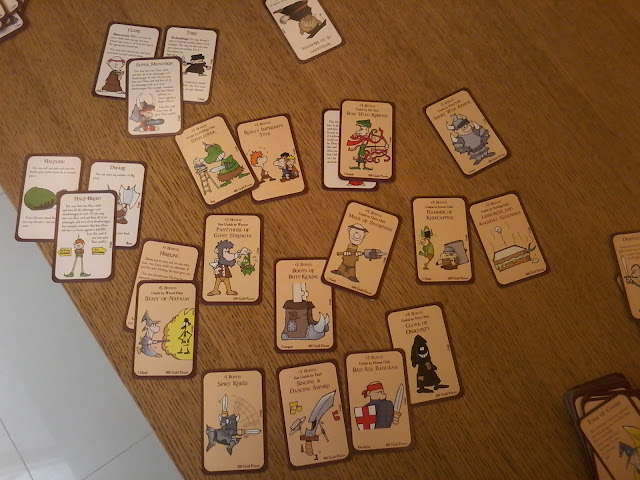 Taking our most powerful character, we threw on all the single-shot bonus items and then, wham, double everything with the doppleganger card. Again, this seemed pretty clear, with no challenging trade-offs.


What is the most powerful monster?

Combination with most power to overcome 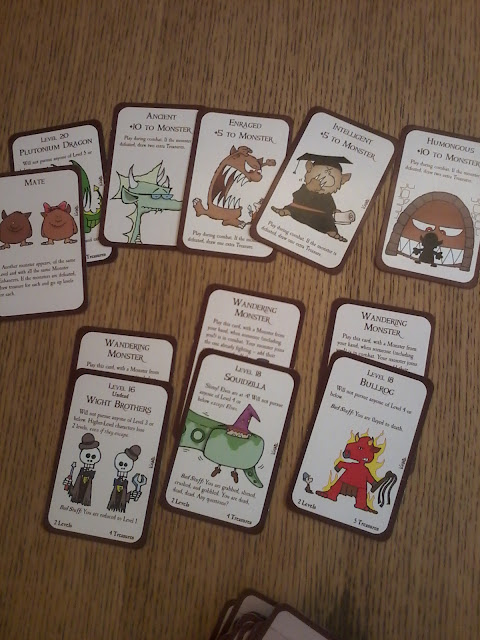 Most difficult to defeat

Naively, you might think that the most powerful fighting combination of monsters is also the most difficult to defeat. Indeed, 152 fighting strength that we found in the previous question is quite a formidable gang to face. From our earlier calculation, a single character doesn't seem able to defeat them without help (150 fighting strength vs 152 fighting strength).  However, since some of the top monsters are Undead and our top character is a Cleric, they could get another +3 bonus and come out on top.

So, the super-monster gang is super tough, but can be defeated by a single character, Super Munchkin!

On the other hand, there is a combination which is practically impossible to defeat and it comes from a monster that doesn't seem to be so powerful: Ghoulfiends. Their base fighting strength is only 8, but you can't use any items or bonuses to fight them! 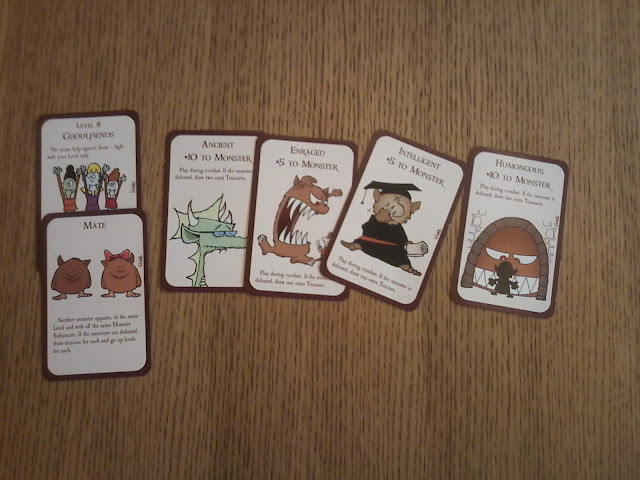 That's far lower than 152, of course. However, if Super Muchkin (SM) faces the mating pair of Enraged, Humongous, Intelligent, Ancient Ghoulfiends (PEHIAG), the contest is 9 (SM's level) against 76. That means PEHIAG is impossible to defeat without help.

Even with help, it would take at least 7 other players of level 9 and one other player of level 4, one of whom is a warrior, to defeat PEHIAG. Face it, 8 other players aren't going to team up to help you win, so, just run away.
Posted by JGR314 at 9:38 PM 1 comment: