Mike Lawler issued a call to respond to a nice challenge Matt Enlow posted on twitter:


Equilateral ΔABC inscribed in a circle. 2nd equilateral ΔPQR such that P is on segment AB and Q & R are on arc AB. Locus of center of ΔPQR?
— Matt Enlow (@CmonMattTHINK) November 17, 2016

I will admit that, initially, I had no good ideas about how to approach this puzzle. Intuitively, I was drawn to the idea of specifying the point P on the chord AB, building the equilateral triangle PQR, and then finding the center of that triangle. In the spirit of doing something, I decided to set up a coordinate system and think about the resulting equations: 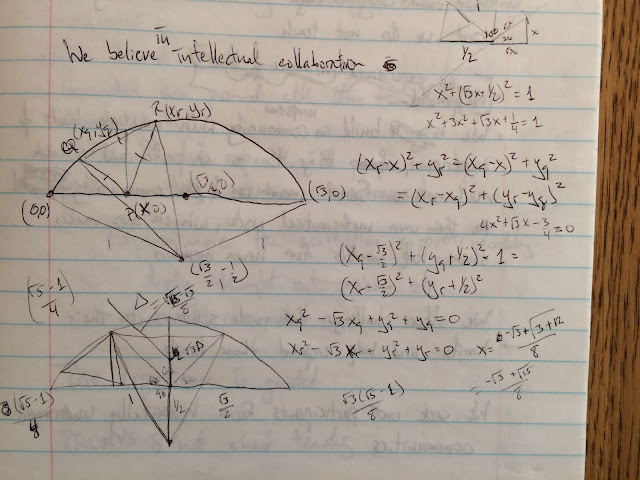 Now, these are a mess and didn't really go anywhere, but, I had two thoughts as I was writing these out:


Now, I'd had the suspicion that the coordinates for the center of an equilateral triangle was the average of the coordinates of the vertices, so I did a little work to confirm that: 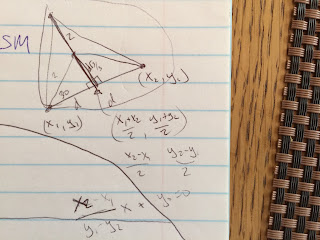 I turned to geogebra to build the picture. Given Matt's request not to send screenshots, I felt that this was a bit of a cheat, but anyway...

I still didn't have a good idea about how to find Q and R, so I first built a worksheet where Q was a free point, from which R would be constructed so that the triangle PQR is equilateral. Then, I played around with Q until it and R sat on the original circle.

After doing this, I had two observations/conjectures. Taking C as the center of the original circle:
Neither is really tricky, so I was a bit chagrined to have missed them earlier, particularly the second point.

With that I now had a method to (a) draw more realistic diagrams and (b) reduce my Geogebra sheet so that only P's location on AB was an open degree of freedom. Here's a link to that Geogebra work. 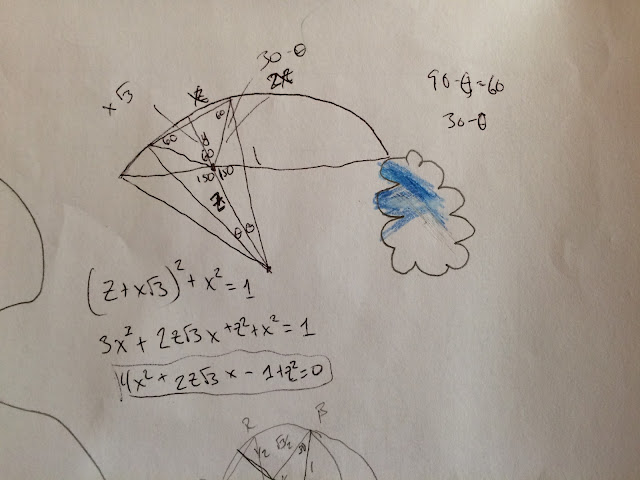 Where I am now

Playing around with the Geogebra sheet, I made and tested conjectures about what conic shape could describe the locus. For simplicity, I hoped it was a circle, but testing three points shows that doesn't look right. Instead, it looks like a hyperbola. With that, my plan is to return to the cartesian plane, define a friendly reference variable, and check that I get the right relationship for the coordinates of our center points.

Putting aside the fun of working on a nice problem, this served me as a great reminder about Geogebra. As a result, we'll soon be playing Euclid the Game at home with the kids.
Posted by JGR314 at 12:09 AM