J3 and I played several simple games recently that I want to record. One of them, race to the top, is a variation of a more sophisticated game that can be used more generally.


Digits three in a row

Materials: a 100-board, 2d10, colored tiles
Players: 2
Goal: mark three spaces in a row
Basic play:
Two players take turns rolling the two dice. On a player's turn, they form a 2 digit number using the two digits and then claim that space on the 100 board. If the space has previously been claimed, they lose their turn.

The first player to claim three adjacent spaces in a line (horizontal, vertical, or diagonal) is the winner.

Variations:
(1) we used one dice marked 0-9 and another marked 00 - 90 (all multiples of 10) and then added the values to get our two digit numbers. This eliminated any player choice, but helped reinforce the idea that the value in the 10's digit is the number of tens.

(3) the winning condition can be changed to allow any three (or four) spaces that are colinear; these spaces would not have to be adjacent.

Notes:
This is a very simple game, especially the variation we played, but J3 found it fun. It was a useful exercise to practice locating the numbers on the 100 board.


Race to the top

Materials: An 11x 6 grid with one side labelled 2 to 12, 4d6, 3 tokens. Optional: 11 distinct tokens/small objects per player.
Players: 2 - 4
Goal: capture 3 columns.
Basic play:
This game is fairly simple, but has resisted our attempts to succinctly summarize the rules. Here is an explanation as we play two turns. 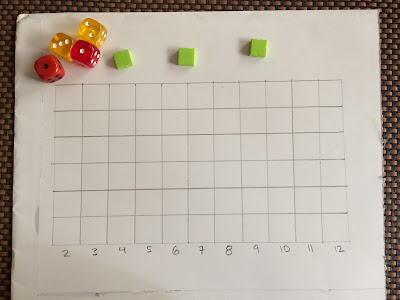 First player, J1 rolls two ones and two fours. With this roll, J1 could group them into two fives or a two and an eight: 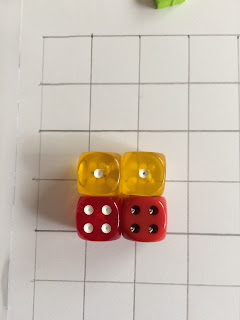 J1 decides on two fives and puts a temporary marker on the second level of the 5's column. After you understand the rules consider whether this choice is better or worse than the 2 and 8. 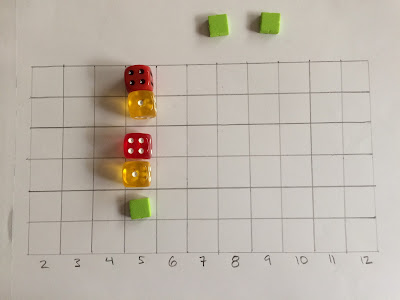 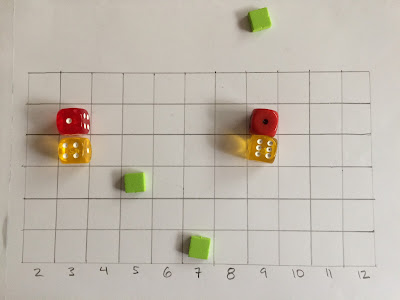 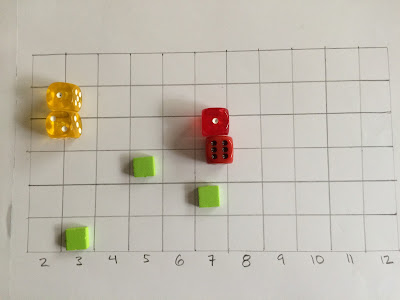 At this point, J1 ends his turn and marks his progress. On his next turn, if he gets a 5, for example, the temporary marker will start at the fourth level of the 5's column (building on his consolidated progress). 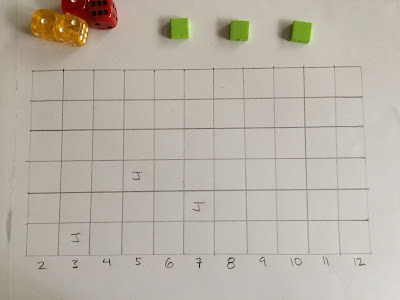 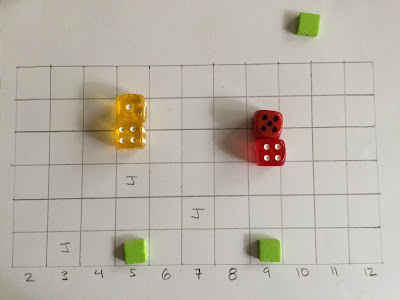 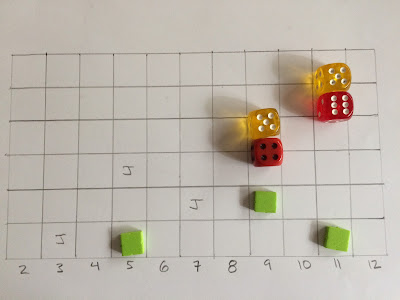 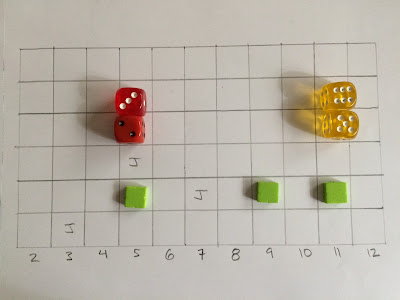 D presses his luck and rolls a fourth time, getting 1, 3, 3 and 5. The dice can't be paired to get a 5, 9 or 11 and there are no more temporary markers available to place, so D loses his progress. J1 will have the next turn. 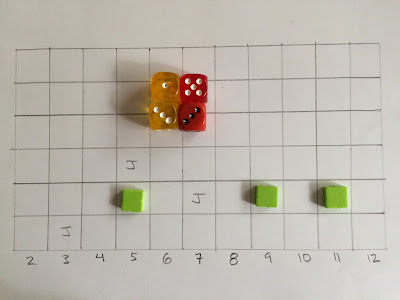 To be clear about the failure condition: the player must be able to place or advance a temporary token for both pairs of dice. For example, if D had rolled 1, 3, 3, and 6, he still would have lost his progress.


Variations:
(1) Change the winning condition so that the first player to capture a column wins
(2) Change the height of the columns, either fewer than 6 for a faster game or more than 6 for a slower game
(3) Change the failure condition so that only one pair of dice needs to be playable and reduce the temporary tokens to 2.
(4) only allow each player to roll one time. This eliminates the "press-your-luck" aspect of the game and is much more basic.
(5) allow players to jump over a square that has been occupied by another player. This rule particularly fits well if you use objects to record your consolidated progress (which also makes the grid re-usable).

Notes:
I was originally taught this game by Mark Nowacki of Logic Mills.
J3 and I played the variation where each player only rolled one time on their turn.
Posted by JGR314 at 2:22 AM