who: J2
when: almost all day saturday
where: reception floor

Building
First, he has been diligently making all of the example constructions included in the bucket.  He managed the icosahedron, but then we hit the stellated dodecahedron.  Mostly working on his own, but even with my help, we somehow got stuck on a squished version: 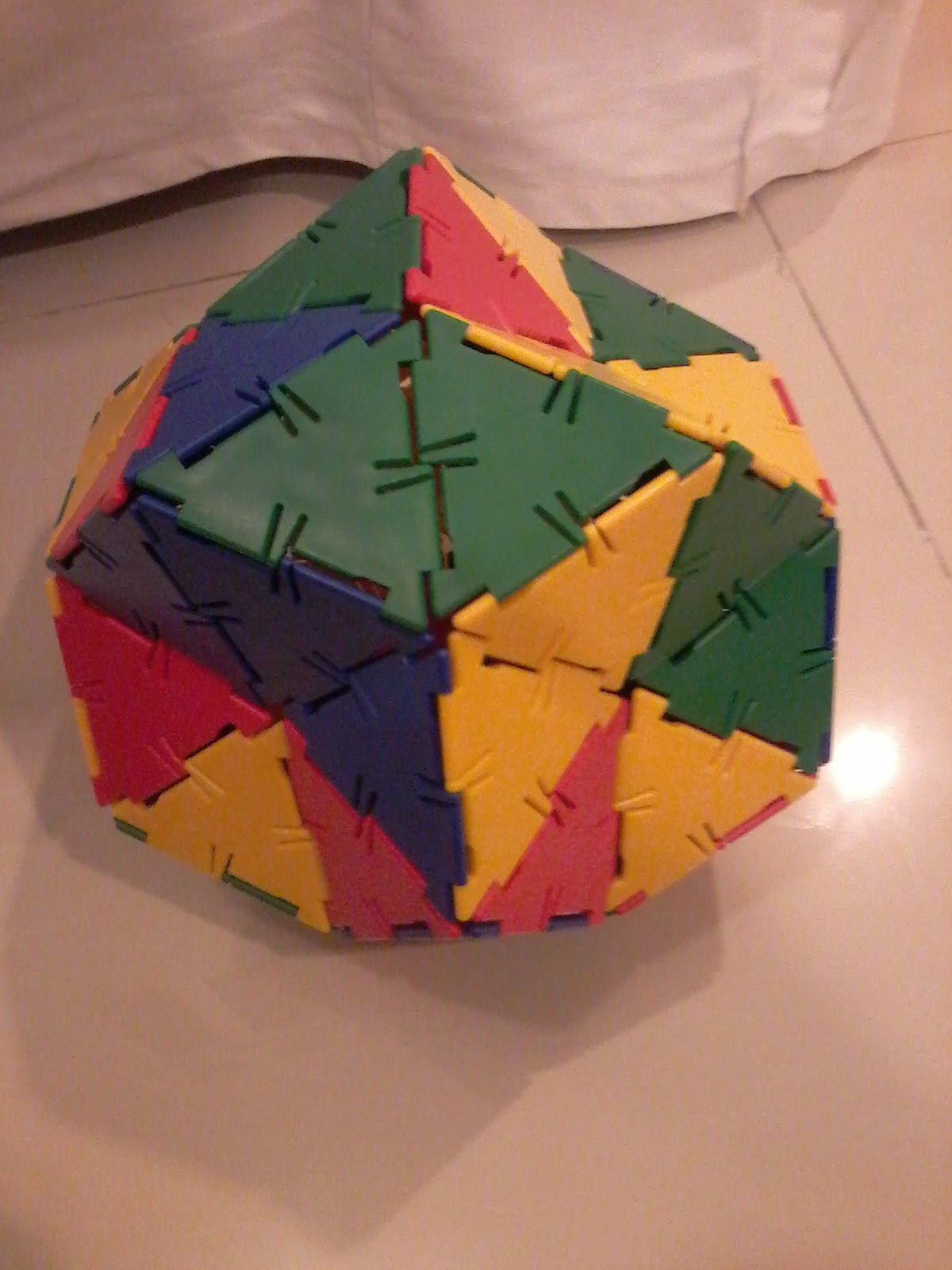 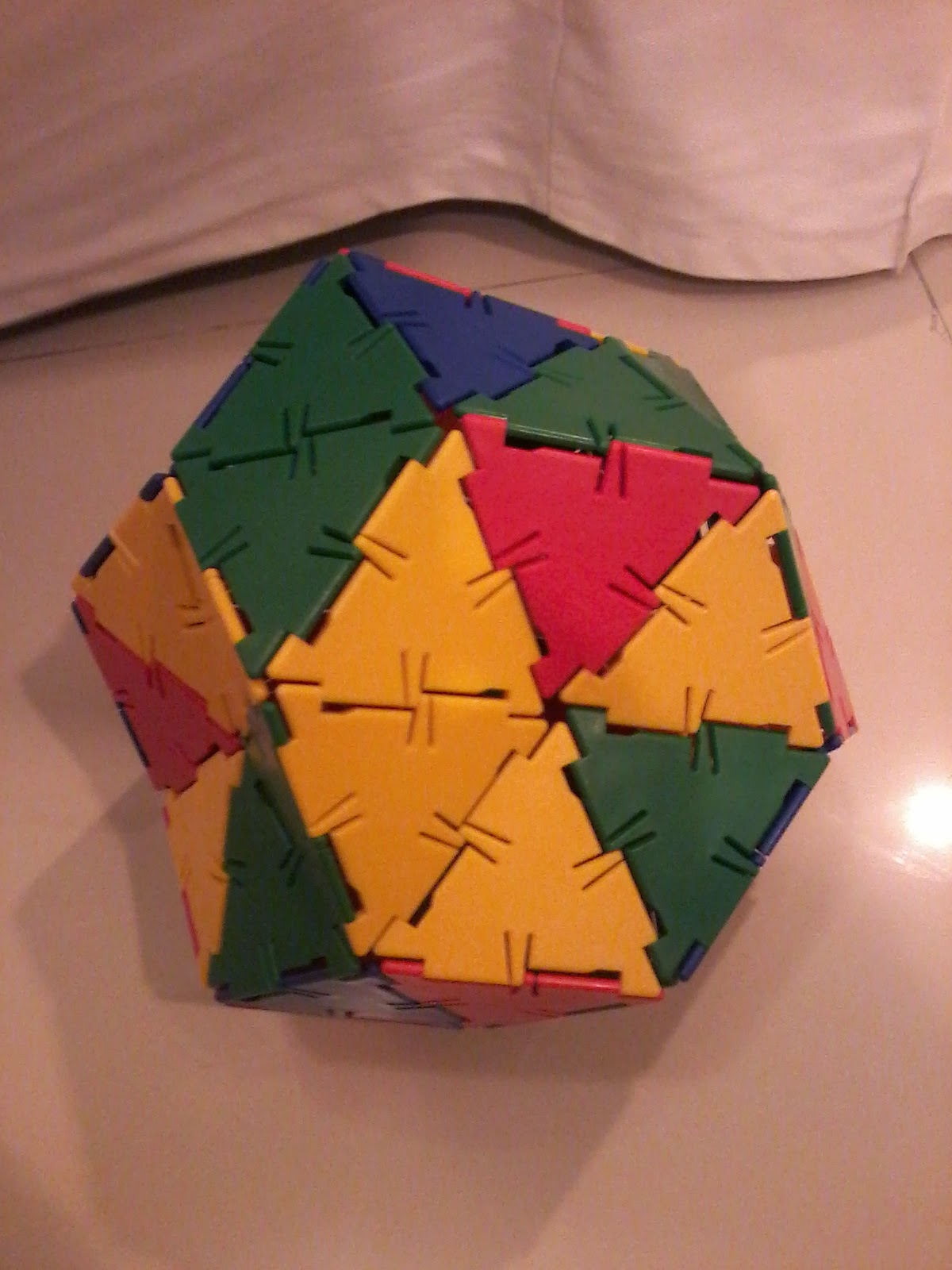 He made some interesting comments and questions along the way:
- we need 60 small equilateral triangles
- we should put them together into 5-triangle pentagonal tents
- should the 6-triangle vertices be squished in, out or something else?

He even outsourced collecting the triangles and making some of the pentagonal panels to his older brother, in a brilliant stroke of project management.

We felt that there was something wrong with our approach to the 6-triangle vertices, so he separately put 6 together and examined how the hexagon could flex, comparing it to the possibilities (more limited) for 5, 4 or 3 triangle vertices.

Next on his list was the cuboctahedron. I noticed in his process that he put together two halves first (3 squares and 4 triangles per half) and then put those together.  He ended up with the shape on the left: 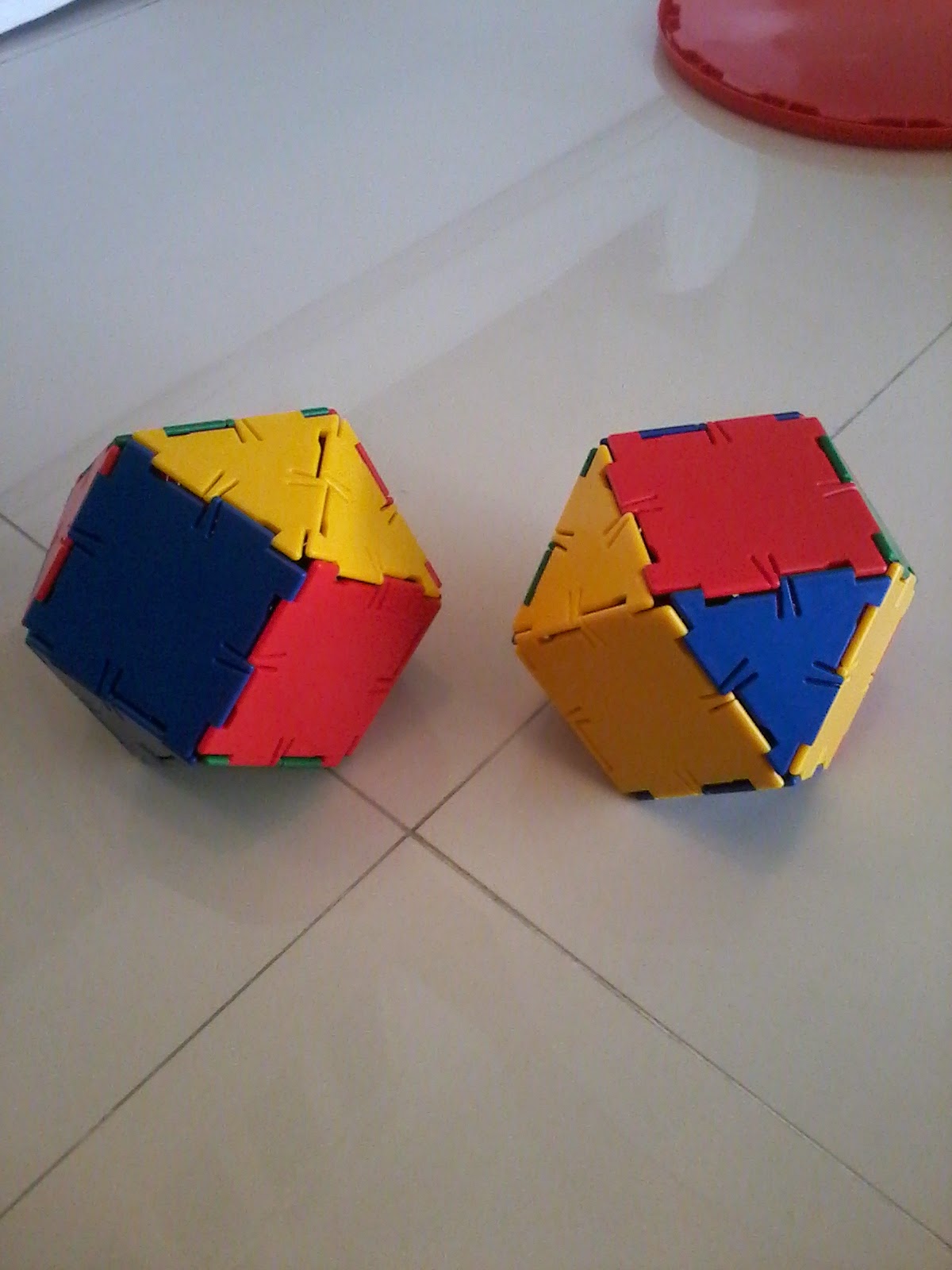 At that point, I asked him to compare what he had built with the picture from the instructions: what is the same, what's different? He focused on the components for the faces, pointing out that both his model and picture had square faces and triangular faces. Then he noticed that the cuboctahedron has alternating faces, while he sometimes had triangles sharing edges with triangles and squares sharing an edge with another square.

He was about to break his model and rebuild it, but I suggested that he build a different one so we could compare them more easily.  Again, he built the two halves and then connected them.  We talked about the following things for each of the two figures:
- is the top face parallel to the floor (I called it flat)?
- is the top face always/never parallel to the floor?
- could you cut it in half with a single straight cut? Are there any straight cuts that will just hit edges?

Finally, I reminded him of the half pieces he had built in the middle of his construction.  If he put them together so one square was matched with a triangle in the other half, could any of the squares get matched with another square? Alternatively, if he started by matching a triangle with a triangle, what would happen?

We looked at the faces with edges on the open half and identified this sequence: S-T-S-T-S-T
Actually, it is a repeating cycle as you keep looping around.

To round out our investigation of this shape, I asked why he though it was called a cuboctahedron?  What does it have to do with a cube or an octahedron? He was ready to move on, so I didn't really push on this, but will return to the nice wikipedia page showing it as a rectified cube/octahedron.

Imagining/Planning
At a later point in the day, I noticed him looking at the configurations for other polydron tubs and then he started explaining which of his favourite constructions are possible or not with the available materials: 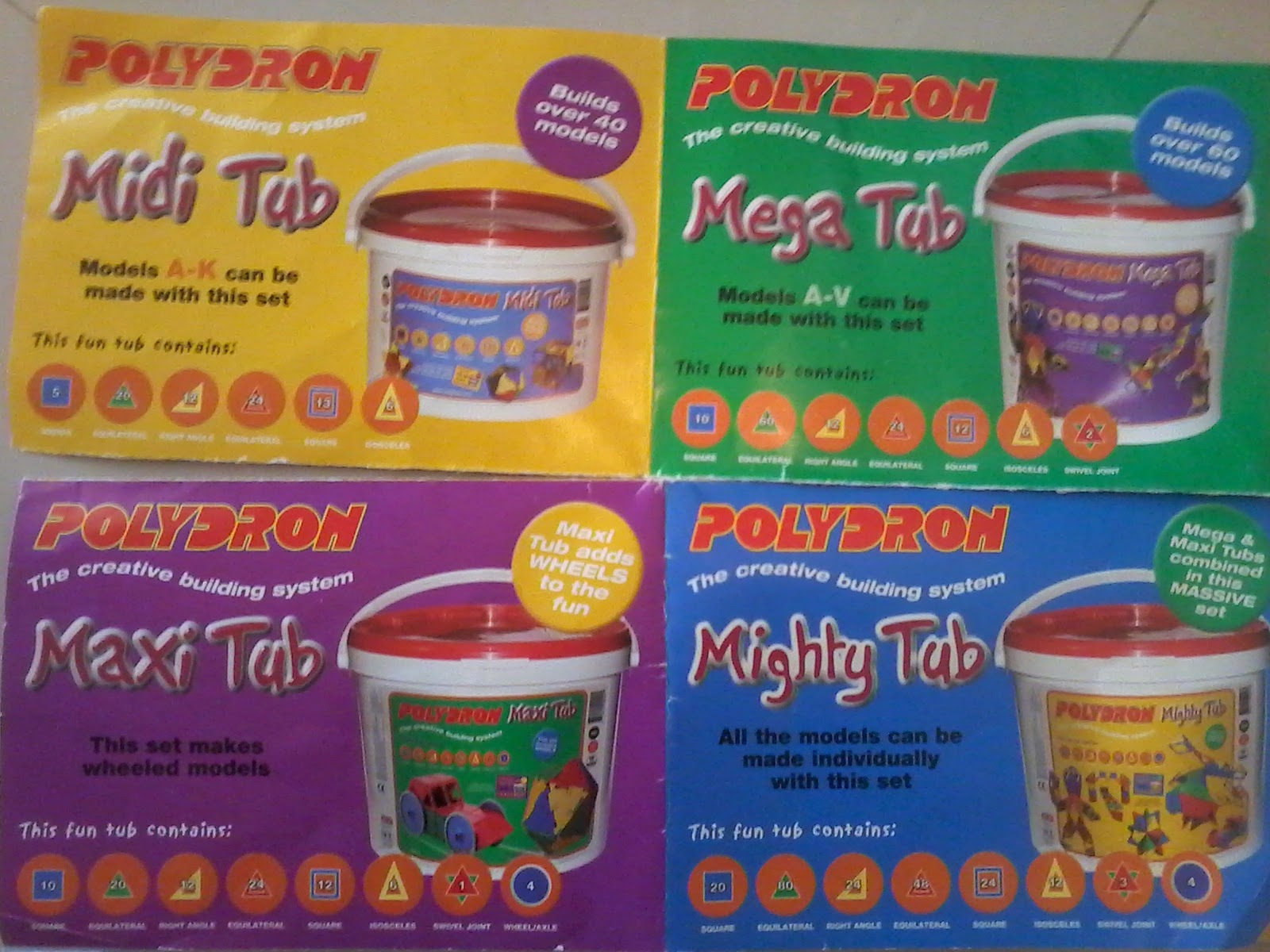 Smashing
Polydron constructions usually shatter when dropped on a hard floor.  This fact can be used for good or evil. I take no credit for it, but today all three were in a mood to playfully and cooperatively destroy their creations.  Since we had been building a lot of different shapes, they got to investigate which ones broke more easily and which ones broke more completely, dropping once or multiple times and from different heights.

My only contribution in helping to encourage the positive tone and to ask them to attend to different aspects of their investigation:
- "Really interesting.  Did you expect that to happen?"
- "Why do you think X breaks more easily that Y?"
- "Are the angles at the edges sharp or flat?"
- "Did you use solid or skeleton pieces for the faces? Which are heavier? Are the edges they make stronger/weaker/same?"
- "does it matter whether you drop on a vertex an edge or a face?"

Finally, when J1 asked: "daddy, do you know the answers?" I could truthfully answer "no, so we will have to keep investigating together" and everyone was pleased with that.
Posted by JGR314 at 8:56 AM