Some recent musings (Talking Math with your Kids)

who: J1
when: at dinner, about to enter the evening rush to get everyone in bed
what material: paper and pencil (rainbow crayons optional)
A couple of recent stories to illustrate the habits we read on Talking Math with Your Kids. Sometimes these are easy to get right and, occasionally, a bit harder.

During a break in a conversation we were having, and unconnected to the earlier topic, J1 made a comment: "equals is different from plus, minus, times, and dividing." I thought this was a really interesting concept for him and wanted the subsequent discussion to live up to it. Things I considered saying or asking included:


From this list, I thought 7 and 8 were to complicated and would be confusing at this stage. I was reluctant to say what I thought he had in mind (1) and was hoping he could formulate an explanation, so I went with the other questions. He wasn't sure how to articulate what he was thinking, we got distracted, and the conversation didn't really develop.

In retrospect, I think I should have committed more to the idea of asking him to draw what he meant. I'm really not sure what he would have drawn, but it would have become something we could both reference and build from.

In that vein, we had a really fun chat about his other idea: what if the Roman number system had a symbol for 0? In the page below, his new symbol is the green figure on the middle right (a trident on an inverted v with both an x and an equal sign through the middle). 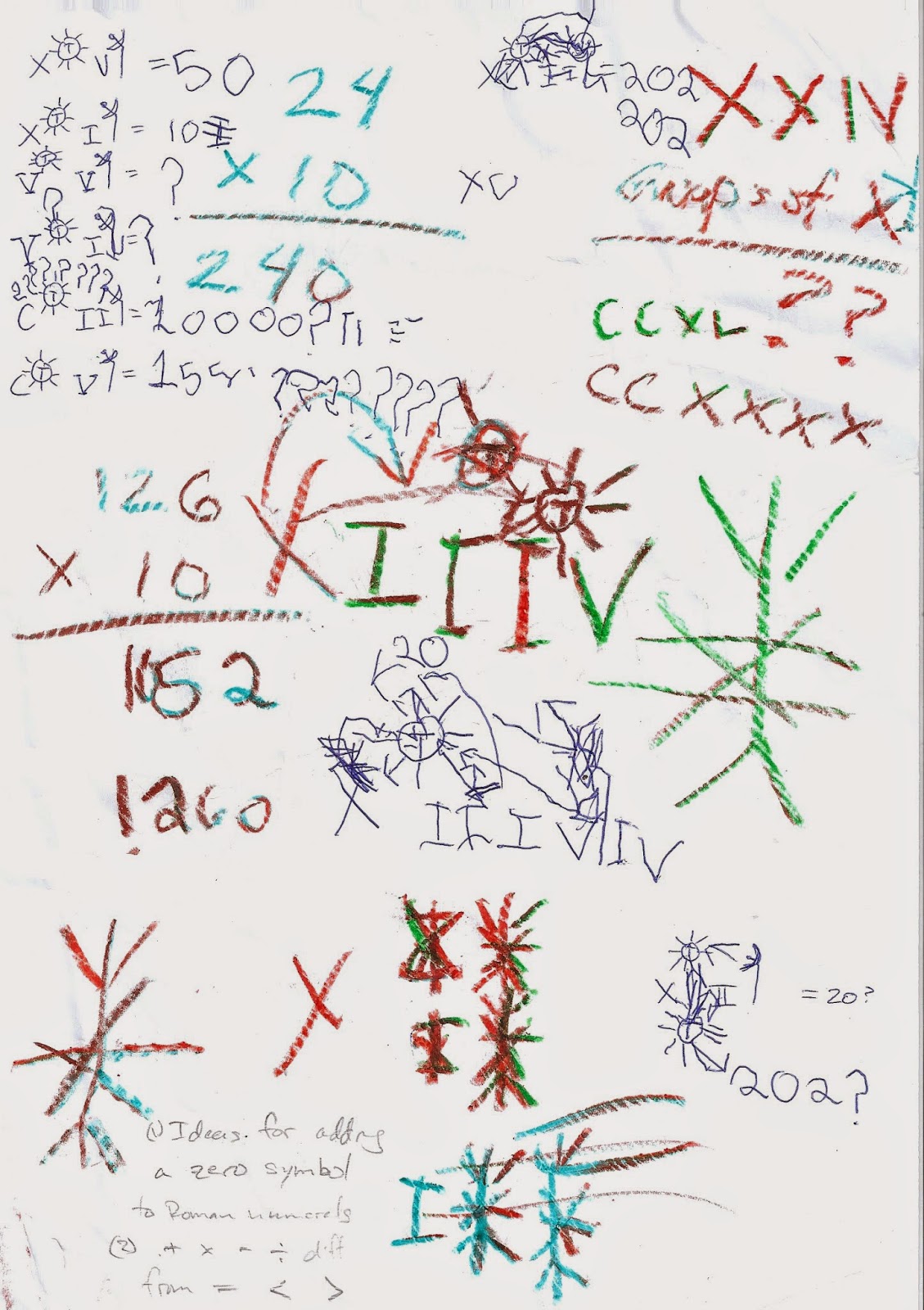 Along the way, we talked about multiplication by 10 in arabic numerals (which you can see he partially gets) and we considered whether his new roman 0 would make multiplication easier in that system. In the first instance, it didn't seem to help that much, so he added more symbols and more rules, making the whole thing increasingly complex. You can see the further two new symbols RA (a sun with 8 rays) and RB (a satellite dish) in the upper left of the page (example X RA V RB = 50.)

Eventually, I started writing down examples in his new system and asking him:

It was a lot of fun to go back and forth as he tried to work out what the rules of his new system were. I don't think we figured out how to make the Romans into championship multipliers, like these guys, but he got a chance to invent a new mathematical system and investigate it.
Posted by JGR314 at 7:36 AM