Just in time for christmas: some valentines math

Note: The point of this post is that you should go take a look at the CSMP storybooks and read them with your (elementary age) kids. They are hard to find, but I've done that work for you: CSMP at the Wayback Machine

You might call us hopelessly out of sync with the rest of the world: we haven't seen the new Star Wars and we are reading math stories bout Valentine's Day instead of Christmas. Oh well, at least we manage to link in at least one New Year's tradition.

In the world of numbers, everyone sends just one Valentine card. However, they arrange it so that everyone receives ten. The fact that they can do this and their technique are explained in the old (old, old) CSMP storybook: Valentine Mystery.

I grew up on the CSMP workbooks and storybooks and they still have a large place in my heart. Now, they are hard to track down; this link is via the internet archive: Wayback Machine.

J3 read the story to me and then we talked together about what was going on. He really liked that the diagrams created multiplicative fractals. We had seen these before, in May when we did activities from Natural Math's Multiplication Explorers, but he didn't remember until I showed some old pictures.

It seemed that he understood the story well enough. What we wondered: what will the numbers do for New Years? I suggested that they would play a game where each number would give one red envelope (filled with cash, of course) but that every number would receive two. Was that possible?

Well, he wasn't so enthusiastic because: "that means every number will just get one envelope." Meaning that, net, they will send out one envelope and get one back. Not so exciting.

His suggestion: In the valentine's mystery, basically the numbers drop their one's digit to figure out who will receive their valentine. Maybe now, they should drop two digits, their ones and tens. Thinking for a bit, he realized this was great: now all the numbers will get 100 ang bao.

Why stop there? Can we get everyone to receive 1000 red envelopes? What about one million? Or more?

Conclusion:  the whole numbers are the ultimate Ponzi scheme!

After realizing that we could get the numbers to receive an arbitrarily large number, we went back to the formulation in the book. Namely:

So, J3 wondered, what if we used 5 instead of 10? Okay, we did a little exploration where he would call out numbers, I would expand the division relationship, then we'd conclude who would send a present to whom:

So, how many presents does each number receive?

Not giving up on the idea of receiving 2, I asked J3 if he knew about binary. "No, but I've heard of it." These are our notes (his handwriting is now almost the same as mine!): 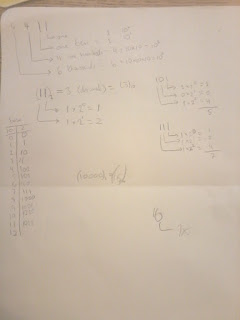 For our table of decimal and binary versions, he would try to figure out the next number. For the first couple of guesses, I would decompose the number and he would figure out the decimal version. After a couple, he did the decomposition himself. Finally, he caught on and understood some of the patterns of how to count up in binary.

We still haven't gotten to the punchline for our New Year's story, but it seems close.