Several months ago, the great folks at EDC released SolveMe Mobiles, a collection of balance puzzles. The idea is pretty simple; you'll probably get the idea from just a couple of screenshot examples.

In many puzzles, some shape values are given and we need to find the ones that are missing so that the arms of the mobile stay in balance: 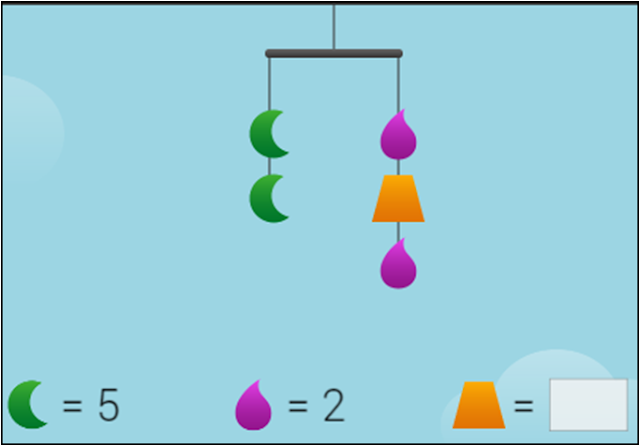 Sometimes, we are told the total weight of the shapes in the mobile. We then have to find the weights of the shapes so that the arms stay in balance: 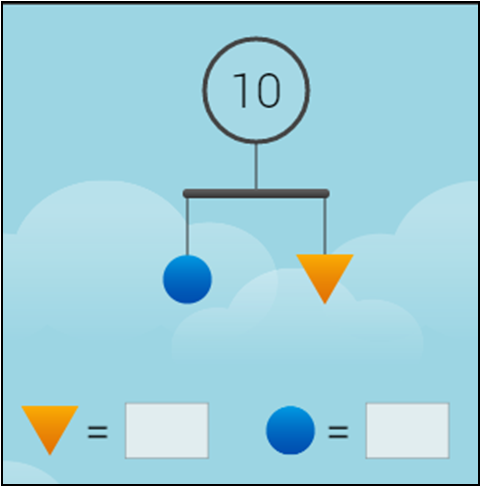 Since we were introducing this idea for the first time, we did a simple version together, then gave the kids size more as a warm-up.

the most advanced puzzle we gave them had a side with three descending strings, like this: 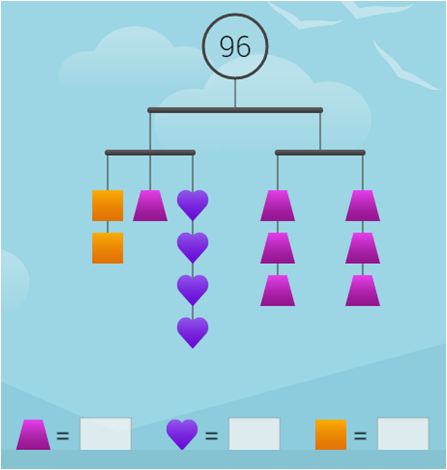 We had a nice discussion about what this means: in real life, do all three of the hanging strings have to have the same value or not? What do we think for these puzzles, does it work like real life or not? 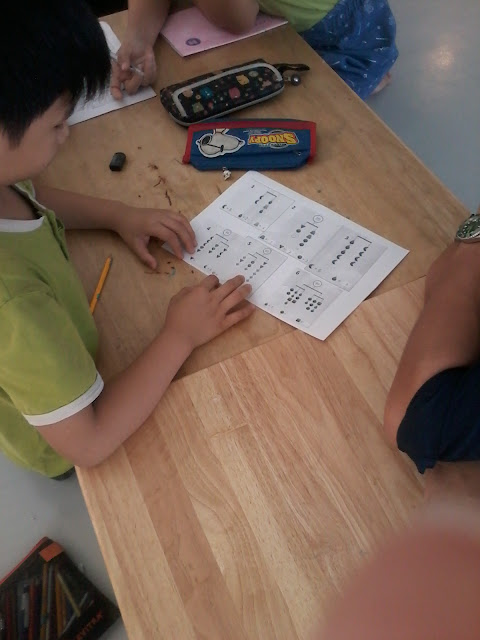 Side note: to online or offline?
For our class, we just had print-outs of the puzzles. This worked really well because it was easy for the kids to make notes and helpful drawings on the side of the pictures. The online system has a tool to write notes and draw on the screen, but it is slightly awkward to use on a desktop. Probably it works well on a tablet or smartphone.

Also, we brought out the unifix cubes as manipulatives for several of the kids to work through the puzzles. Of course, nothing would stop someone from doing the same when they are solving puzzles on a computer, but, in practice, I find that the idea just doesn't occur to them in the same way.

With the online version, you have two options that can give additional help. One is an animated test of whether the mobile is in balance. The other options shows numbers at the top of each string that represent the total weight under that position. Each of these makes the puzzle a bit easier by offering a guess-and-check strategy and a nice form of feedback.

Make your own
I always love getting kids to make their own versions of the puzzles. In the class, several of them finished a bit faster and I asked them to make puzzles for me. This feature is also built into the on-line version, which is a nice touch.

Our second activity of the day was Block Blobs. This comes from Beast Academy, though we made some small adjustments to their game.

The basic playing board is graph paper with a central dot. To make each game a manageable length, we split our paper into four sections for four games. Each section is about 20x30: 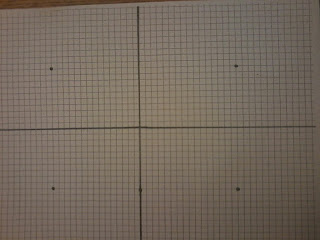 This was one slight deviation from the BA version: they use a 12x12 board. Each player has their own colored pencil to use as they mark out territory.

On a player's turn, they roll two dice, then they try to draw a rectangle on the board that uses those  two numbers as side lengths. For their first rectangle, they have to put one of the vertices on the center dot. For all subsequent turns, their rectangle must share at least 1 unit common boundary with an existing rectangle, may not overlap any existing rectangle and may not go off the board. The growing collection of linked rectangles forms their Block Blob. 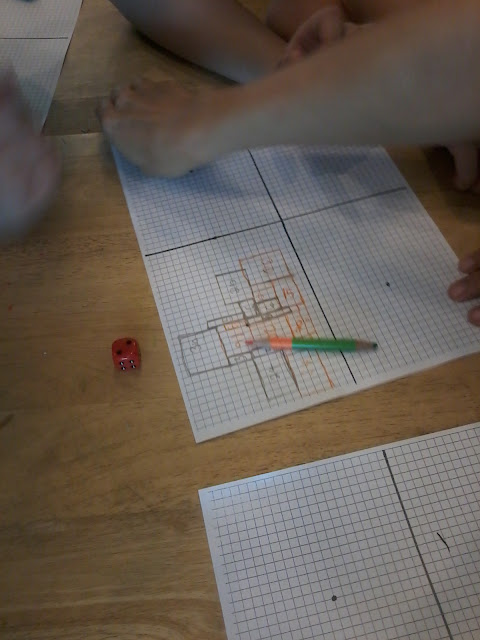 Play ends when one player is not able to add the required rectangle to their blob. Then, each player figures out how much area they have covered and the one who covered the most wins. To make this final calculation a bit easier, we had them write the area inside each new rectangle as they added it. 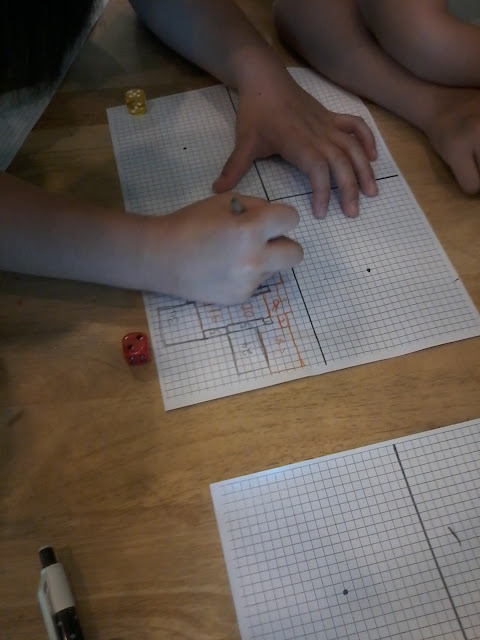 Differences with the BA version
As mentioned above, BA suggests playing on a 12x12 board. We originally thought we would us 2d10 instead, so wanted boards that were at least two times larger in each direction.

Second, we required each player to start their block blob with a vertex on the center dot. The BA version requires this of the first player, but allows the second player to start their blob anywhere on the board. Since we were using larger boards, we wanted to facilitate the issue of competing for territory by having the blobs share a vertex. Another option would be to have each player start their blob in opposite corners of the board. This idea is similar to the game Blokus.

Third, we ended play when one player could not add a required rectangle (they pass their turn). The BA version stops play only when there are 4 passes in a row (two for each player). Though seemingly subtle, this was a major change. In our version, the player who gets squeezed out, either through weak play or bad luck, doesn't get penalized as harshly as in the BA version. This turned out to be very helpful because it meant that ending scores were much closer than expected, so (a) it was actually necessary to total the areas to see who had won and (b) the loser got a pleasant surprise when they saw that they were still very close.

For what it is worth, all credit for this important rule change goes to PK!

Of course, each of the versions can make for a fun game with slightly different strategic considerations.
Posted by JGR314 at 10:56 PM