A bit of 3D(ish) geometry

Note: this post started out focused on two recent geometry projects. However, the Desmos Function Carnival, which I originally just included as a miscellaneous item, is also worth your time.

The most ambitious project recently was led by P (the mom, of course). She found nets for 3-d shapes and supervised J1 and J2 as they created a nice display to take to school.

Here are the nets: SenTeacher Polyhedral nets. They have a collection of other printables, but this collection of nets seems to be the most interesting. Take a look and let me know if you see anything else worthwhile.

Here's the completed board: 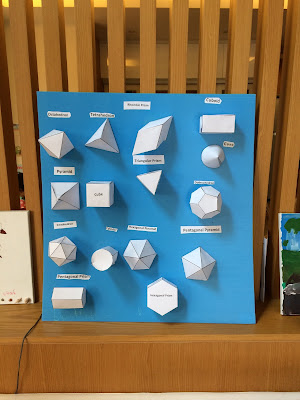 A profile picture to show that these are really 3-d: 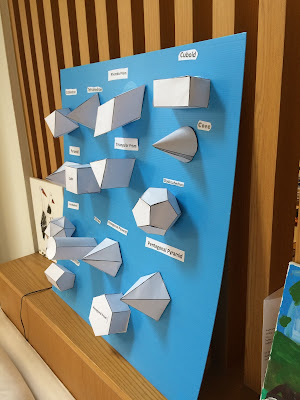 Solid Shapes and Their Nets (I think Jo Edkins is the author) has a nice discussion of nets and a little puzzle game to distinguish nets that fold into the platonic solids and which don't. Feel free to try to do this for the icosahedron or dodecahedron!

J2 asked me about a triangle with two right angles. Of course, we all know that a triangle can't have two 90 degree angles, right? Well, this fits in my list of math lies from this old post: 23 isn't prime.

We talked briefly about triangles on a plane and agreed that two 90 degree angles wouldn't work. If we try by starting with a side and building two right angles on that side, we just get parallel lines. Ok, that's standard.

However, what about this: 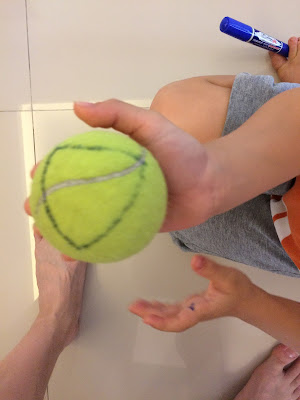 We discussed spherical geometry for a bit. Not shown is our first attempt on the other side of the tennis ball that did have two right angles, but the third wasn't. He wanted to see an equiangular triangle on a sphere. This led to further discussion of life on a sphere:


Picking up the point about π, it occurs to me that this is another math lie. This point got a nice treatment recently by SMBC:

Now for my usual grab bag of other things we've been doing. Some of these are really great activities, so don't skimp on this section!

In case you are, you might like to know that there is another flavor of Function Carnival available through the Desmos teacher site with 2 other activities. Each version is worth checking out because both of worthwhile activities that aren't in the other. Also, Kent links to this nice graphing activity from the Shell Center which also worked well with J1 and J2.

For our purposes, I was more interested in the mathematical physics (plots of position vs time or velocity vs time) and the fun of creating wacky animations with impossible plots.

If I can figure out how to post the animations, I will update this page, since the animations really enhance the experience. For now, let me give you some screen caps of some of their proposed graphs from the Cannon Man (height) activity:

Here is J2 playing with the function carnival, but J3 (4 years old) enjoyed it just as much: 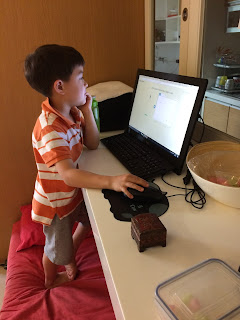 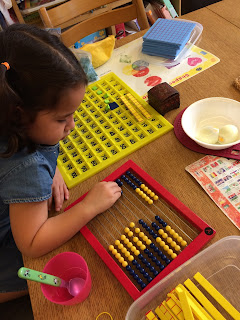