This summer, we are working through Jared Lichtman's recent proof that the primes achieve the maximal Erdős sum over primitive subsets of the natural numbers.

Quanta Magazine had a very nice article describing the theorem (formerly a conjecture of Erdős) which is the inspiration for this project. The article is here.

I will be posting notes on our conversations. The most important thing to understand: this project is about the journey and not the destination. We may not (probably won't!) get all the way through the paper. Along the way, we will take plenty of detours and excursions.

We started with the definition of primitive sets and tried to come up with examples.  I loved Jin's first example: $\{2\}.$ The first three examples in the paper were easy:

Coming back to perfect numbers, we noticed that $\sigma(m)=2m$ when $m$ is perfect.

We then started looking at $\sigma(n)/n.$ Again, we began with data, building a table with $n$ from 2 to 9 and started making conjectures. The first conjecture was that this function falls as we move from even to odd $n$ and then rises when we go back to even.  In other words:

This allowed us to realize that, if $m\mid n$ then $\sigma(m)/m < \sigma(n)/n$ because the relevant sum for $n$ will contain all of the terms in the sum for $m$ and additional ones. From there, it was trivial to see that a perfect number could not be a multiple of another perfect number.

We talked briefly about how many perfect numbers there are. Jate had heard that all even perfect numbers are of the form $2^{p-1} (2^p-1)$ where $2^p-1$ is a prime (called a Mersenne prime.) This led us to ask whether we could nicely add anything to the perfect numbers and still keep the set primitive. Following an idea in this Carl Pomerance talk, we defined the minimal nondeficient numbers (we didn't use this name, though!):

We talked about how this would be a primitive set and then tried to find some elements that were not perfect.  We stopped for dinner before we found an example, so this is another open thread.

A picture of our written notes on the exploration are below. 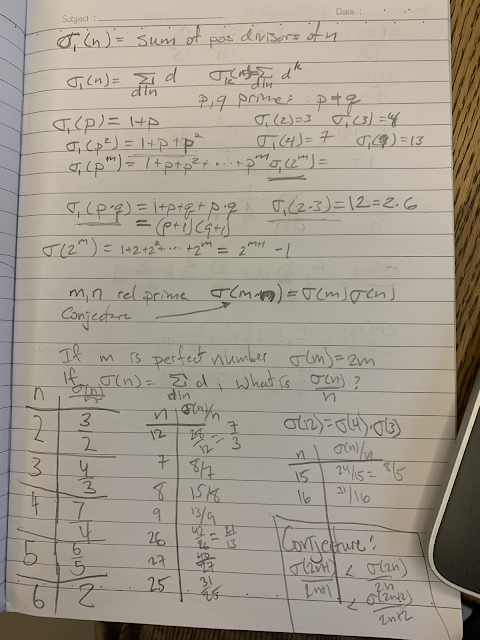 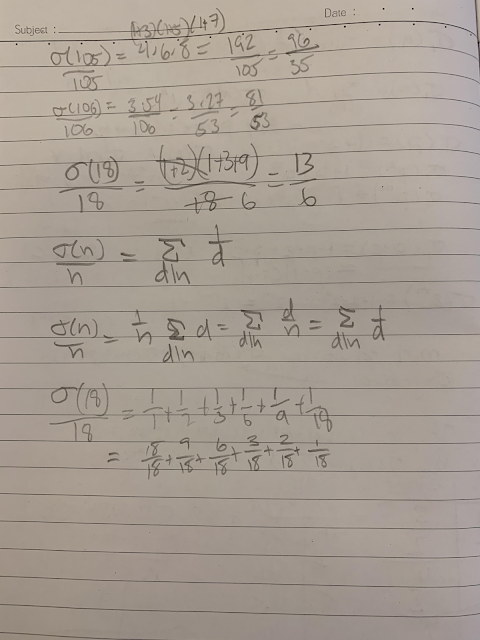