Who: J2
Where: all over the house
when: after school almost every day last week and all weekend

Recently, there has been a lot of excitement about the photo math app (on-line community at-large) and hand calculations (just within our house). Is there a place for doing hand calculations and learning standard calculating algorithms when technology has already automated so many mathematical operations and is attacking problems of increasing complexity?

I'm not going to attempt to answer comprehensively or theoretically, I'd just like to make some observations based on J2's explorations this past week.

It started with squares 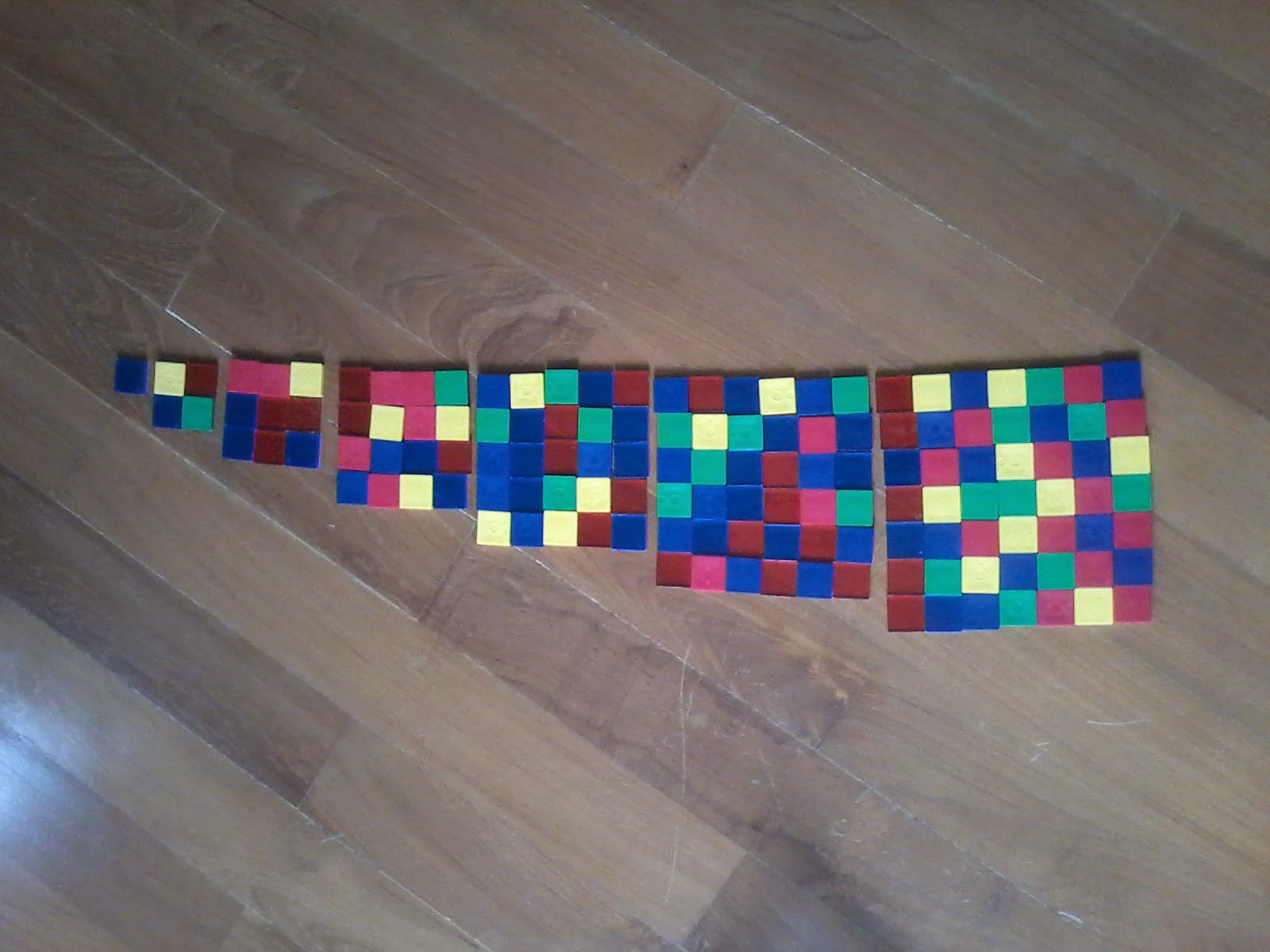 Who knows why, but J2 was building a sequence of squares one afternoon with our colored tiles. I think he had seen something when we were doing another investigation or had heard me make a remark and wanted to investigate square numbers himself.  Making these squares was a fun and colorful way to do the calculations.

At some point, he realized that he wasn't going to have enough tiles to keep making separate squares and he consolidated into one square which he kept growing. I think this 13x13 is where he stopped that day. 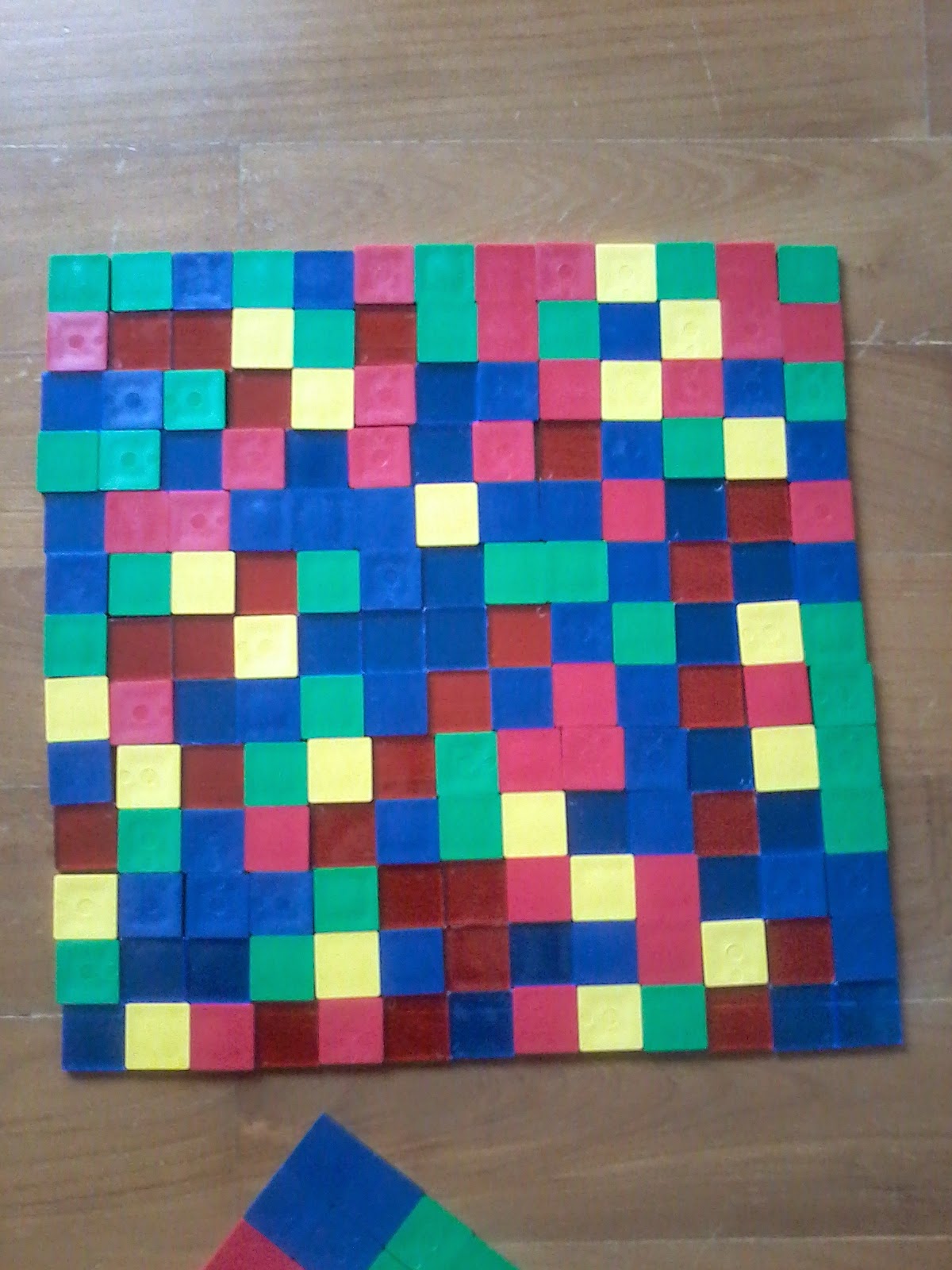 What was he thinking?
He was absorbing the numbers and looking for patterns.  Early on, he realized that it was annoying to keep counting all the tiles to calculate the new square, so he wanted a faster way.  At one point he came to report his progress and explained: "I have 100 tiles in my 10x10 square.  When I make the 11x11, I know it will have 100 + 10 + 11 tiles."

After that, he kept using this relationship to check his results. We also played around with doing the multiplication directly. Whenever we did a multiplication, I would find a way to illustrate the distributive property and usually invoked some number bonds.  Here is one illustrative example, though mostly I just drew diagrams like this on a paper: 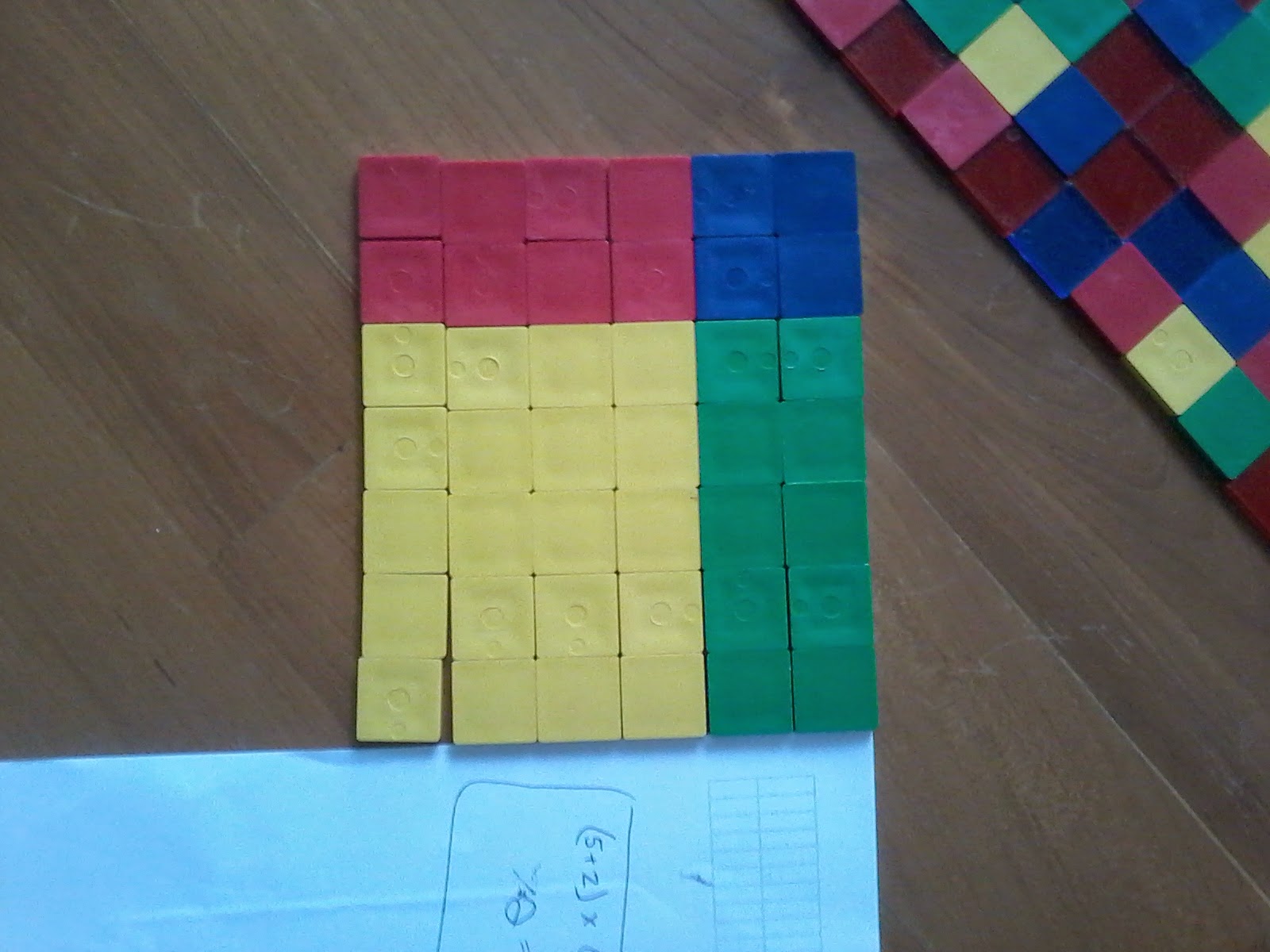 Incidentally, I got this design from Mike Lawler's video giving a physical illustration of why the product of two negatives is positive.

Another tool:
For several of the calculations, J2 was using a 100 chart or our 100 board.  He spent a bit of time looking at the board thinking about whether the squares were easy to see on this board.  his intuition was that, somehow, it would be nice to see them as the vertices of growing squares within the grid.

I suggested he build his own 100 spiral and look for patterns along the way.  This is slightly less than halfway (well 40% of the way, to be exact): 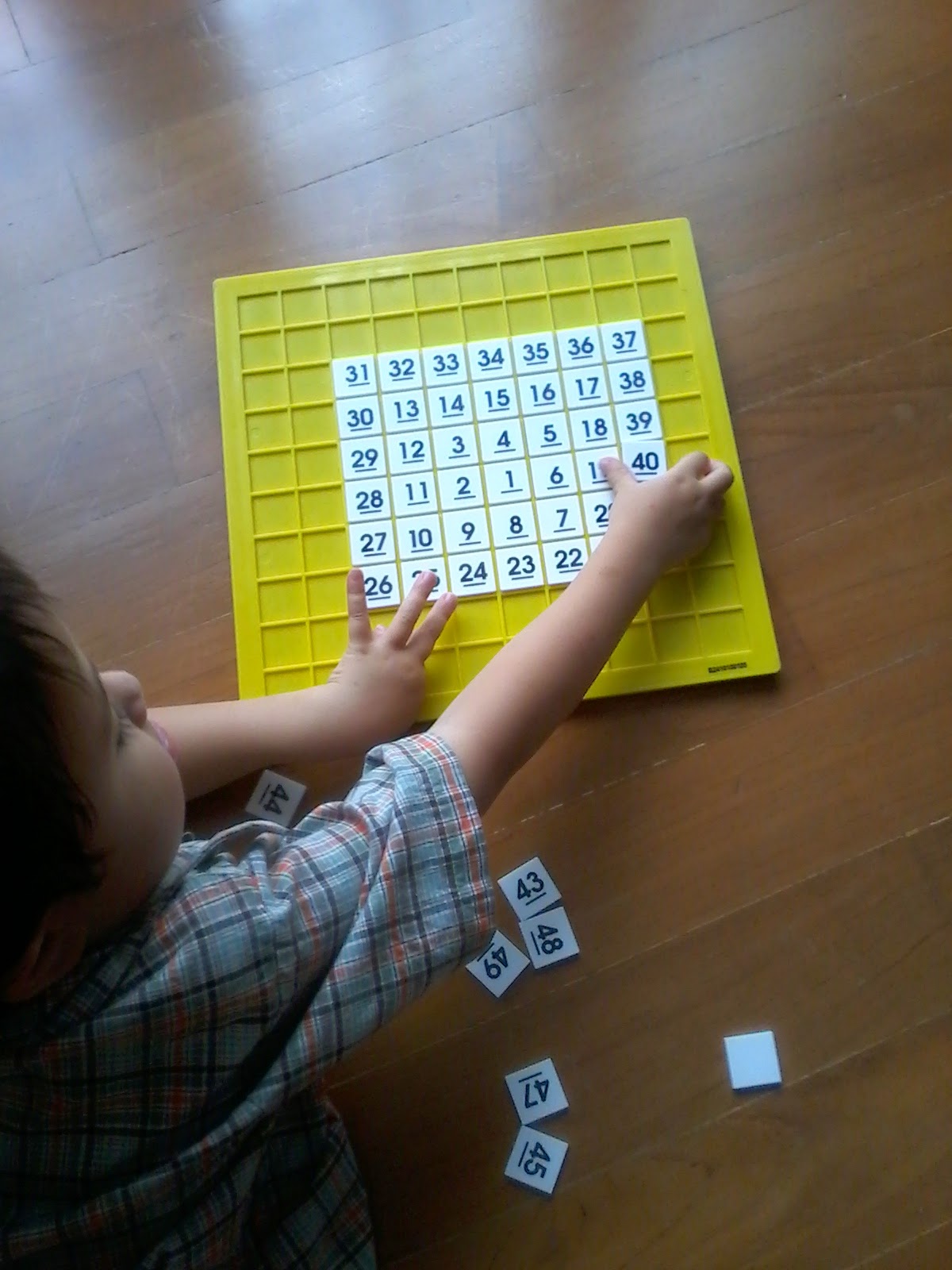 While he did this, he noticed three things:
(1) the squares are appearing along diagonals
(2) the even squares are rise moving northeast and the odd squares increase going southwest.
(3) we also get non-square rectangles at 1x2, 2x3, 3x4, 4x5, etc

I have it on good authority that  you can see something interesting with the primes in this configuration (see Ulam's Spiral) but that will have to come later for our J's.

Some further adventures
Along with his hand calculations, J2 started entering his squares into a spreadsheet. This let him explore larger squares than he could multiple right now and well beyond our tile collection. Also, we could explore first and second differences, seeing his old recursive relationship in a new way.

Beyond the squares, he has since done similar things with cubes (constructing physical cubes out of trio blocks, building a table in the spreadsheet, looking at differences), powers of 2, and quartics. Looking at these all together allowed him to start seeing connections around more advanced questions:
- which powers of 2 are squares?
- which cubes are also squares?
- which quartics are squares?
- how fast do the different sequences grow?

A hint of what is to come: before going to sleep last night, J2 mentioned that he wants to talk to me about triangular numbers next . . .

What do I conclude
For J2, the hands-on manipulations and associated hand-calculations are helping him see number patterns more closely and become familiar with a lot of interesting relationships.  This work has provided him with a platform to then engage with more computationally powerful tools. Importantly, he doesn't see it as a binary choice between manual and automated calculation, but is very happy to alternate between the two.

Further reading
For a more thoughtful and comprehensive discussion of the app and the impact on teaching, see Dy/Dan.
Posted by JGR314 at 12:17 AM