who: J1
when: while on holiday from school
After a long gap, I had a chance to look at Tanya Khovanova's math blog again recently. She has a nice mix of questions/puzzles, some of which are beyond our kids right now while others are perfect. Yesterday, we talked about a pair of problems involving a trio of puzzling characters: Alice, Bob, and Carl.

My hidden number
In the first puzzle, Carl has a secret number and gives out some clues. This puzzle shares characteristics with the (recently) famous Cheryl's Birthday puzzle. In particular:


I like Tanya's puzzle more than CBP because it is more self-contained and also invites us to a bunch of (elementary) number theory observations in addition to working through the logic.

Here are some highlights of the discussion:


Where's the party
In the prior puzzle, we could trust everything that Alice, Bob, and Carl said as being true. In our second challenge, where's the party, we now confront a problem where there is always something distorted in their comments.

Once again, we felt there were some parallels with some of the scenario's from Smullyan's Alice in Puzzle Land. You have to play with the statements you are given to extract the useful information.

The key issue in our discussion of this puzzle was the process of going back and forth between "true" numbers and numbers spoken by the characters. This led us to talk about functions, like Alice(t) is the number Alice will say when she is talking about true number t and the inverse functions. J1 called the function inverse operator Undo, so Undo(Bob)(Bob(t))=t and Bob(Undo(Bob)(s)) = s.

Suddenly, J1 had so many questions about these new objects, Alice(), Bob(), Carl(), and their Undo relatives:


This was an invitation to make some pictures, a simple graph of the three functions. Here is J1's and then the one we made together: 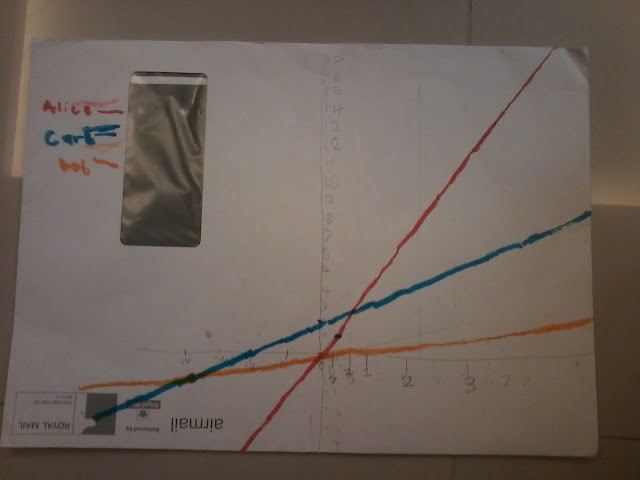 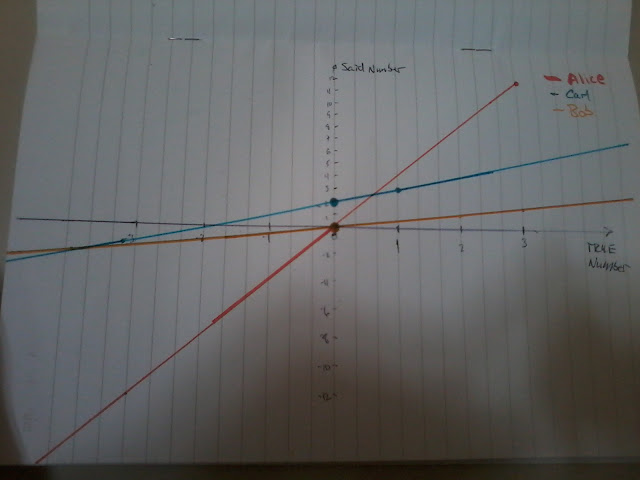 The pictures then gave us some new things to notice. For example:


A call for puzzle extensions/mash-ups
J1 asked something I wouldn't have considered on my own: are these the same Alice, Bob, and Carl in the two puzzles? If so, does something interesting happen if we combine the distortions of the second puzzle with the basic set-up from the first puzzle? What if Alice and Bob don't know Carl's constant?

Please go forth and consider this version, as well as create new ones of your own. If you need further inspiration, consider this mash-up Cheryl's sweets, from the fantastic Aperiodical crew.
Posted by JGR314 at 3:04 AM