We are totally flipping out!

Who: J1, J2, J3
when: dinner time
What did we use: 4 coins
In Sue VanHattum's linkfest post, there was an intriguing puzzle: given four coins in a square, can you call out commands to flip coins so that you are guaranteed to eventually get them all up or down? More precise instructions/rules are in the link.

We saw very quickly that this is an excellent puzzle:
Everyone got to have fun taking a turn as the coin master (following the flipping instructions and rotating the square) and most of us took a turn as the (attempted) solver. Here are our tools: 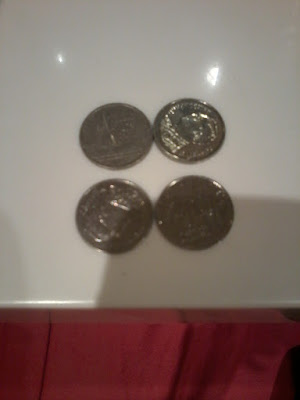 For most of the conversation, I just listened. The kids naturally focused onidentifying states: what are the possible conditions for the coins, which of these are, for purposes of the puzzle, identical and which are truly different? One other part of the discussion was about moves, again, which are identical and which are different. Of course, the didn't quite use this terminology.

Simplify?
I suggested they try the puzzle with a smaller number of coins. 1 coin, no problem, it always starts solved. 2 coins were pretty easy again. What about 3 coins? Here, there was a little thinking about what the equivalent version would be for 3 coins. In particular, do the coins have this configuration: 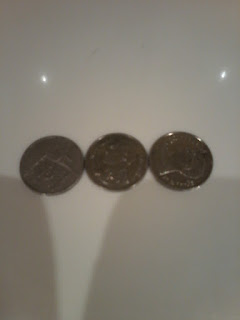 and the coin master can only swap the outer two coins, or are they in an equilateral triangle like this, 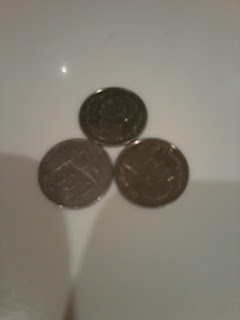 and rotations are the only transformation?

Well this is math, so there are no right or wrong answers, you just have to try out your different ideas and see what is the most beautiful.

Another simplification we thought about was to eliminate the rotations.

Probabilistic Attack vs Strategic Game
The problem asks for certainty, but let's assume the rotations are done at random. What if  you are happy with a high probability of getting a solved configuration? Is there a different strategy that has a faster expected ending time? Can you say anything about confidence levels (probability of ending at n or fewer moves)?

In contrast, what if the coin master is playing against you, trying to increase the number of moves you take by selecting tricky rotations. Does that alter how you think about the game? How you play, in practice?

See, I told you the ceiling could be pretty high.

Make it bigger
Okay, you've solved the 4 coin puzzle, what about 5 coins? Are there interesting versions for larger numbers of coins?

Whatever you do, I encourage you to try the 3 coin triangular version with rotations.
Posted by JGR314 at 6:51 AM