In grades 2 and 3, we have been playing with variations of NCTM's game Times Square, one of their offerings on Calculation Nation. This is one of my favorite multiplication games because, like the puzzle Bojagi, it is fun and multiplication is integral to the game, it isn't just a set of flashcards in disguise.

Here's a basic Times Square board:
Players take turns moving one of the square windows at the bottom to select two numbers, then get to take possession of the square that is the product of the values the windows are on. In our starting game, the AI moved the first window to 6, I moved the second to 5 and captured 30 (5x6). The AI then moved from 6 to 1 and captured 5 (1x5). On their turn, the player can move either window, but has to capture an open area (you can't duplicate a product you've already captured or take over an area your opponent has previous captured). The first person to get 4 in a row wins.

A pen and paper version
We didn't have (or want) computers for all the kids to play online. Instead, we created a simple paper and pencil version. We made many copies of the board on a piece of paper, with the numbers 1 to 9 at the bottom. We then used small rubber bands (loom band left-overs!) to select the factors and players used colored pencils to claim their territory.

It was an easy, colorful, and fun implementation of the game:

Noticing the structure
As usual with this kind of activity, there are many possible extensions, with two obvious groups being strategy (how do you win the game) and structure (what do you notice and could change about how the game is set up).

So far, we have been looking at structure. Here are some of the things we discussed relating to the basic board:

Make it simpler
The next iteration was an exercise in simplifying. Do we need to use all factors 1 to 9? What if we made an easier game with factors 1 to 4? Here is the version we came up with:

Surprise, surprise, we can still make a nicely shaped grid! Now, we aim for 3 in a row, like standard tic-tac-toe, but with a constrain that means we can't always move where we would like. With this simplified version, maybe we can go back to our strategy questions and gain some wisdom that will help for the 1 to 9 version?

Make it more complicated
What if we wanted a harder (calculation) challenge than 1 to 9? Are there other collections of factors that would give us nicely shaped grids? We had them work out creating a grid based on factors 1 to 13.

It was really interesting to see the different strategies that the students took to determining what would go on their boards. Some people tried creating full multiplication tables and then removing duplicates. Other people counted up from one and tested each number as they went along. Some people identified patterns, essentially working with the diagonal and upper half triangle of a multiplication table.

Here's a student, hard at work calculating the 1 to 13 board: 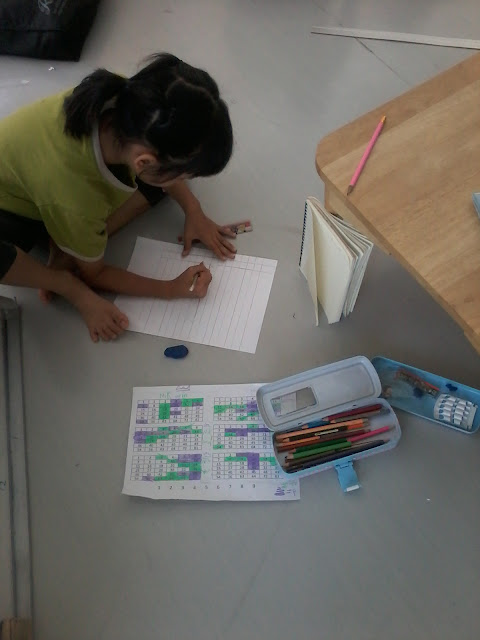 For the 8x9 and 9x8 boards, we had them take some time to play on each version. Does play feel different on the two different boards? Is there a different strategy for the two boards? Perhaps you will also experiment with this.

Can we see anything interesting if, instead of using integers 1 to n, we use a different collection of n integers? For an easy one, try using the first n primes. Maybe using n integers that are in an arithmetic sequence would be interesting?

This simple pencilcode program could get you started on gathering some data: TimesSquareBoards.

For some light, related reading: Number of Integers with a divisor in a given interval (Ford 2008) which was linked on this Math Stackexchange question.

A picture, just for the heck of it

Having nothing to do with any of this, what estimation and math questions do you have about this picture: