Playing Santorini with a make-shift set inspired the older two Js to create their own games. We test played J1's game, but haven't yet had a chance to test play J2's game.

Set-up:
Kings start in diagonally opposite corners with their soldiers one square away. Pre-placed cubes also start on positions (6, 3), (6, 5), (9, 3) and (9, 5).
You can see these details in the picture below (the extra chains of cubes were just on the board to give a tidy "resting" set-up when we weren't playing): 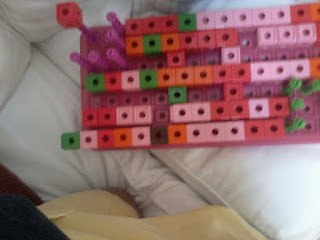 Turns
Turns alternate. On a player's turn, they move one of their pieces (the king or a soldier) one grid space (pieces can move diagonally). Then, they have an option of one of 3 possible actions:


Winning
First player to remove the opponent's king from the board is the winner.

Playability
There are some elements that suggest this game has possibilities, but the current rules quickly become a stalemate. First, we noticed that any attempt to pig-head an opponent is a half-suicide mission, since they can pig-head right back on their turn. There is one exception, but it involves the opponent accidentally walking into an obvious trap (and there's no reason why they would do that).

Possible modifications
The main problem is that wall building is too fast. Perhaps we should allow the soldiers to break down two bricks each turn, but restrict all building to one brick at a time. This means that any fortress can, eventually, be broken down, if the siege army is unmolested.

Equipment
Again, this is based on the TRIO set, but also requires 2 dice (choose your favorite sizes/shapes/markings).

Set-up
The straight connectors start in the same corner configuration as Castle Overrun: 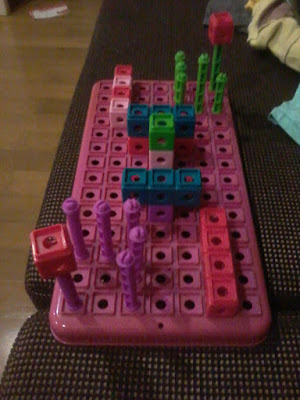 There is another special piece in the center of the board, the boat: Turns
Player rolls two dice and then moves a piece according to the values shown on the dice. They can move one piece for both values, or move two different pieces. Restrictions: movement is orthogonal (not diagonal) and pieces can not pass through a space occupied by another piece.

After moving, the player pushes the boat one space toward their starting corner. This means that only one of the boat entry points is available at a time. This is like a moored boat rocking back and forth with the waves.

Winning
The first player to get three pieces onto the boat seats is the winner. They get a double win if their "king" is one of the pieces to get onto the boat.

Playability
This seems to be a solid racing game, similar to many other games for children. The boat mechanic adds a small twist. It seems playable and fun for kids, but lacks any deep strategy.

Possible modifications suggested have been:
(a) some way for the two teams to attack each other
(b) a way to release the boat from its anchor so that the movement is more extreme and/or erratic
(c) possibility for a team to attack the boat and sink it (perhaps to prevent an opponent from reaching the winning condition).

Putting aside how good their games were, I was delighted with the ideas and enthusiasm both J1 and J2 had for creating their own games. While I had been hoping they would have been more pro-active about designing a DIY Santorini set the day before, it seems that exposing them to this gave them a boost of inspiration to try their own.
Posted by JGR314 at 3:06 AM