We have been continuing the Gord! (BGG entry, Math Pickle site) games festival that started when we learned about Santorini. Today, the game we started learning is Tiananmen.

Game theme
While I have told the Js the name of the game and the designation of the sides as police/communist party and students, we haven't talked about the events of 1989. If you have a strong opinion about the game theme, feel free to let me know in the comments.

For now, this isn't our focus.

This game is played with a go/baduk/weiqi set. While we recently got excited about that game, too, we haven't yet purchased a set. That means, once again, part of our efforts for this game are DIY/substituted versions.

Note: while the rules are very simple, we initially failed to understand how to make a legal move, thinking that we were able to play anywhere that was connected (including diagonally) to the batch of "stones" played by the previous player. That variation makes it far too easy for the students to win. In most of the pictures below, there will probably be a bunch of illegal positions.

As a first attempt, we played checkers vs dinosaurs (+mammoths) on a chess board: 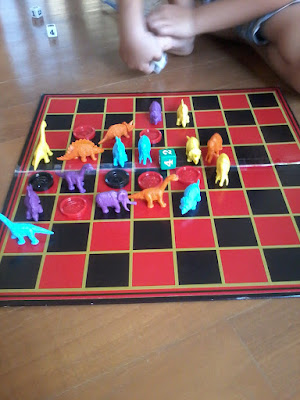 For this version, we shrank the target in the center to one intersection. Also, you can see that we were playing on the spaces, not the intersections of the board: 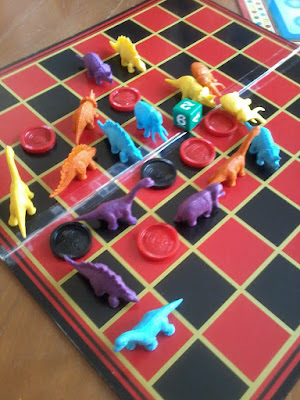 In this version of the game, it was far too easy for the students to win.

For our second attempt, we used square tiles to recreate a full sized board. Unfortunately, this is how many yellow, green, blue, and red tiles we had: 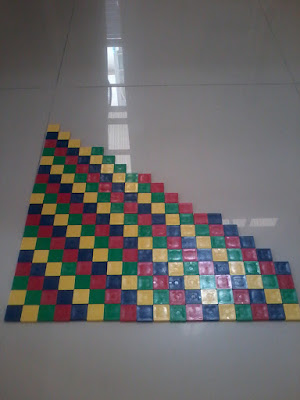 That made for a nice little exercise: how many tiles are missing from the square? 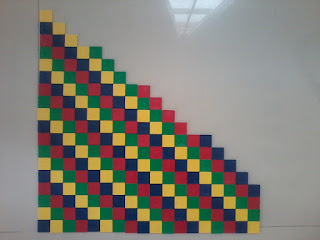 Not so nice looking but we did fill in the rest of the board with other square tiles (the whites are from our 100 board, so this gives another way of quickly seeing how many were missing). As you can see, the TRIO set again came in as a central monument: 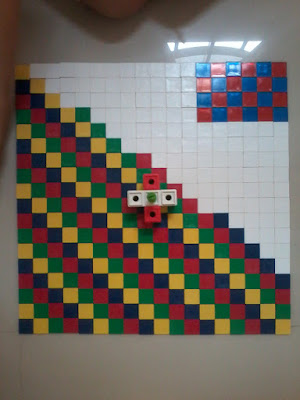 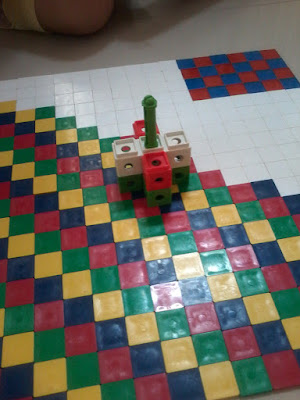 On the larger board, we used blue 1 cc cubes for the police and wooden 1 cubic inch cubes for the students. Eventually, we ran out of wooden cubes and had to substitute circular magnets and then colored tiles. 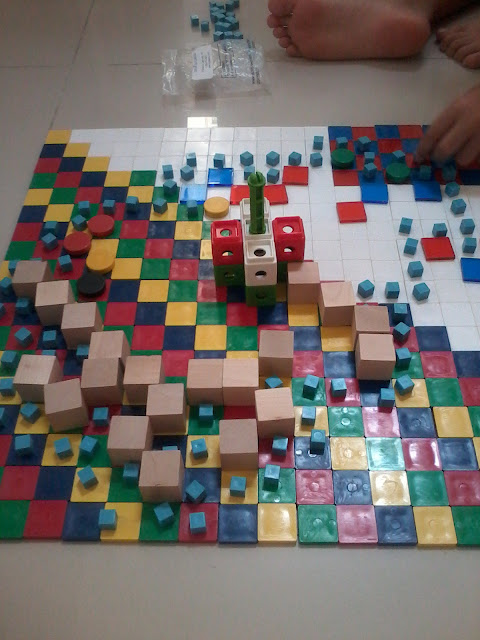 If you look carefully, you can see that we still failed to understand the rules at this point: playing on the squares rather than intersections and making illegal moves.

An epilogue and recommendation
Finally, we did figure out how to play. For those starting out, especially those without a go set, I strongly suggest playing first on the intersections from a chess board (9x9 grid) with a monument in the central intersection. This is a version that is easily accessible for young kids, but still has connections to the strategic thinking of the larger game.