Here in Thailand, the kids are now on summer vacation, so I've been exceptionally busy and found it hard to write blog posts. We've still been doing a lot of math, so I wanted to at least note down some of the activities.

Credit for this one goes to another parent at J1's school. One day when school was still in session for J1, but J2 and J3 were already on vacation, we happened to see a group making sonobe modules at the elementary school. This is something my mother tried to introduce to the kids last year, but it didn't catch them at the time. Not sure what was different this time, but J2 was really intrigued.

Most of the work has been J2, but J3 also got into the act and folded about 9 units herself. I helped to sharpen the folds for 6 of them, which J2 and J3, working together, made into a cube.

Here are two of J2's stellated octahedra, made in between swimming sessions at the beach: 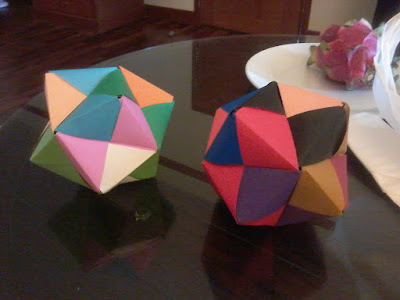 Video references we found useful for guiding our sonobe exploration:

Sonobe Cube: this is where we started.

Stellated Octahedron: shows how to make the basic module and how to assemble 12 into a stellated octahedron. This proved to be easier than I had anticipated, so J2 was able to do this all on his own.

Doubled tetrahedron: unfortunately, this doesn't give a sonobe module tetrahedron, but rather a 6 sided shape. We had actually made one of these ourselves when experimenting with 3 sonobe modules created from post-it notes. These are delightfully strong and feel really nice to toss from hand to hand.

Chirality
Sonobe modules come in two flavours, depending on which corners you fold into the center. All three of us (J2, me, grandpa) accidentally made the two kinds of sonobe modules without realizing it, only to struggle when we went to assemble a larger model. This started a brief conversation about chirality. While we didn't explore in depth, it did spark a later moment of recognition when Matt Parker mentioned the concept for mobius strips (see below).

Robustness
I was really surprised that the sonobe models we built are so robust. The completed shapes don't fall apart very easily (especially the doubled tetrahedron). Even better, for the models we have built so far, the sonobe modules themselves don't need to be perfect. This was crucial for the beginning origamists in our gang as it allows them to do almost all the work from start to finish.

As mentioned above, J2 was excited about investigating classical construction problems. This is something he has seen a couple of times in the Abacus Math curriculum that P does with the kids. However, in that, we haven't generally been strict about the tools they use and the collection includes some standard triangles (45-45-90, 30-60-90) and measuring tools (rulers, protractors). Now, J2 was curious to see what could be done with just a straight-edge and compass.

For physical construction, our tool of choice has been the Safe-T compass:

Obviously, this doesn't quite correspond to the ancient limitations, but we ignore the ruled markings and the various holes are always within our margin of error on radius lengths anyway. Other than the obvious (for a parent) advantage, I think this compass style makes it easier for 2 people to help each other when drawing the circular arcs.

J2 has also been playing Euclid the Game. The virtual constructions have added two interesting points:

The big insight here is about the relationship between understanding four dimensional shapes and our own ability to perceive 2 and 3 dimensional shapes. Other than that tip, I'd direct you to these great resources:

Flatland: we don't actually have a copy, but I know it well and it is a foundation behind a lot of the discussions we had and videos we watched.

Matt Parker's Royal Institution talk: He covers a lot that isn't about four dimensional shapes, but I'm not going to point you to the relevant starting time because the whole talk is great!

XKCDhatGuy: This was actually one of the first videos J2 found and, hey, the kid does a pretty good job explaining. Don't, by any means, stop with this explanation, but it is a fine place to start.

Carl Sagan's Flatland: J2 liked it, but I still remember the old cartoon from the BU library that we would watch at PROMYS and wasn't so impressed.

Drawing 4th, 5th.. dimension:  Somehow, the simple points in this video really helped demystify higher dimensional shapes for J2. I think part of the point is that it encourages us to attend to aspects of the shapes that we can understand easily (for example, the number of vertices in an n-dimensional cube) rather than worrying about the macro shape.

Rotations of 4 dimensional shapes:  Similar message to the previous video

There is no 4th dimension: Nice, quick explanation living up to the high standards of other One Minute Physics videos. A very worthwhile series, in its own right.

This isn't mathematical, but I wanted to record this for posterity as well. Through random chance, J2 asked, "How do you play cricket?" At this point, he is still 2/3 English, having spent most of his life in London, so I guess he has a right to some information about this crazy pastime. For better or worse, though, that's not what he got. Our house rules: