In class, we played with the NRICH Chairs and Tables activity (our outline here). We came up with an extension that we explored at home: making a sequence with smaller and larger chairs.

I knew that J2 had incorrectly counted the cubes in the NRICH sample chair, so I kicked-off by asking him to show me how he counted them. This was a surprising, and unintentional, kick-off. His method was to decompose the chair into three sections: seat, back, and legs. This upper left 2/3rd of this picture show how he determined the number of cubes in each section. 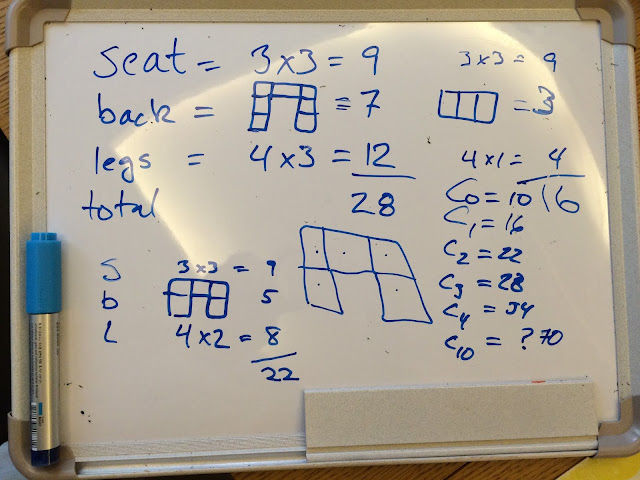 The previous picture also shows notes about how J2 thought of making the chair bigger or smaller. His idea was to keep the same size seat, but make the legs and back of the chair longer or shorter. You can see our drawing of back for the two next smaller chairs.

Along the way, we looked at the total number of cubes in each chair. A simple pattern jumped out to him: each step is a difference of 6 cubes. He quickly realized this was because each leg required one more cube (4) and there are two on the sides of the back.

From algebra back to geometry

His idea of the 0th chair really excited me as this was one of the ideas I had been hoping we would uncover. We talked about how this chair would look (a 3x3 seat with one cube in the middle of a side as the back). This was not something we would naturally have created when asked to build a chair.

What we had done is gone through a sequence translate from geometry to algebra, naturally extend the algebra to a new case, translate the new algebraic case back to geometry.

One other delight in this activity was that J2's sequence was not one I had in mind when outlining the activity. Of course,  wanted to share my version, as well.

I followed his decomposition into seat, back, and legs. See if you can understand my notes and picture how my chairs are growing through the sequence. Chair D3 is the starting example from NRICH. 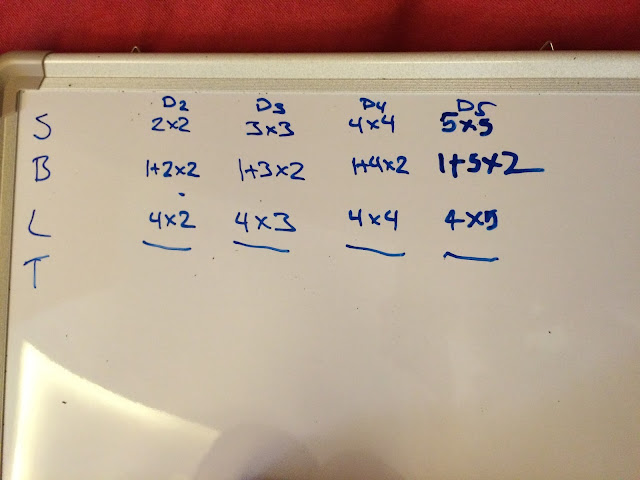 I asked J1 to fill in the D1 chair to see if he got the pattern.

J2 noticed that, this time, the gaps between cube totals were not the same, but the second difference is constant. 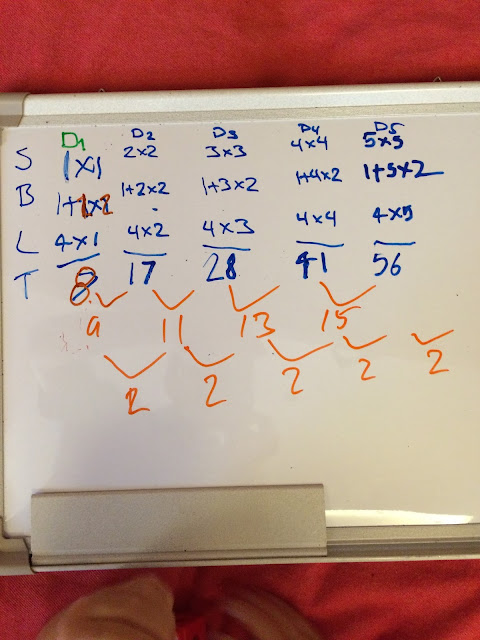 To round up the discussion, we wrote down an equation for the nth chair and calculated how many cubes would be in the 10th chair. Finally, we tried our trick of extending to the 0th chair. 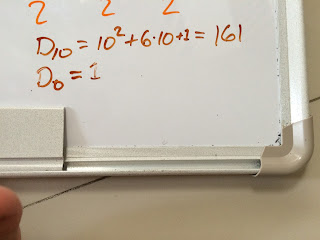 This time, we realized that there could be something interesting in the 1st chair, too. See if you can build a version of our D1 chair, using whatever your favorite building material might be.