Recently, Mike Lawler posted a challenge base on the first question from the recent European Girls Math Olympiad (side note: what is "European" about this contest now that a US team participates?)

I enjoyed thinking about this problem and wanted to come up with something related to do with our kids. One way to see this problem is that it appears to reverse the direction of the inequality between the arithmetic mean and geometric mean. My version for younger students involves exploring this inequality first.

I had J1 and J2 select two dice from our pound-o-dice. Initially, J1 chose a d20 and d6 while J2 chose a d12 and d6. I asked them to make a table with 6 columns and 7 rows (we ended up adding more, so probably better to ask for 8 columns and 10 rows). I had them label the columns:


They rolled their two dice and put the values into columns A and B, the calculated the other two columns as labeled.

J1's first results were 16 and 5. After filling in the rest of that row, he paused and then switched to 2d4. This wasn't a problem for our investigation, but he did miss some calculating practice with more difficult seed numbers.

After filling in 6 rows of data, I asked them what they noticed. 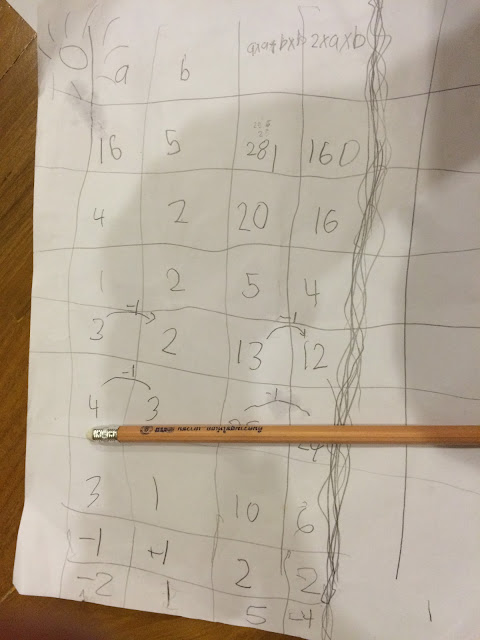 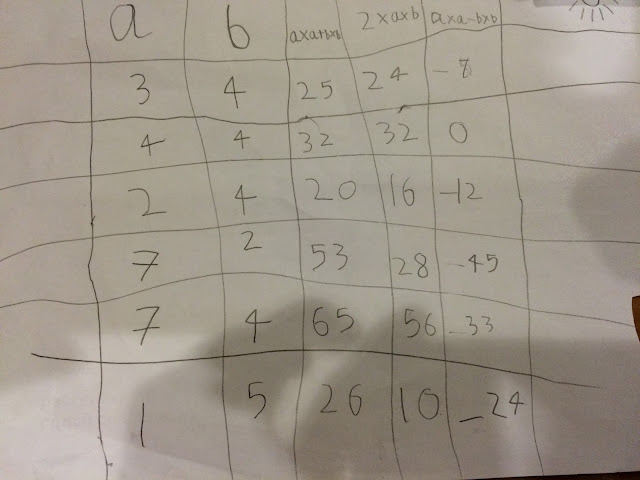 Here were some of the observations:

J2 really got into the spirit and asked for some more suggested columns. I told him to add:
AxA - BxB and (A-B) x (A-B). J1 also added the square of the difference.

With that, they noticed two more things:


You can see that they also added some negative numbers on J1's sheet and challenged one of these observations.

To finalize our exploration of the inequality, we used tiles to build intuition for a picture proof of this identity: 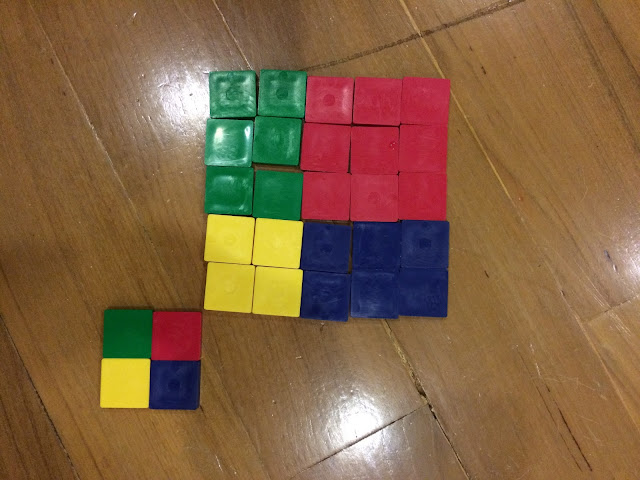 This is one of the pictures we liked the most. In this case, A = 5 and B = 2. Along the left side and the bottom are rectangles AxB (the green + yellow and the blue + yellow regions). These two rectangles overlap in a BxB square (the yellow region) which they also highlighted with the 4-color square. The remaining red square is (A-B)x(A-B).

Side note: In our discussion, I was delighted that J2 would correct me whenever I slipped and said "greater than" instead of "greater than or equal to" when discussing the inequality.

Two quick algebra extensions
For kids who have already done a little algebra, proving the identity using the distributive law should be fairly straightforward. The other little extension is to show that our expression A2+B2≥ 2AB is equivalent to the arithmetic mean-geometric mean inequality.
Posted by JGR314 at 6:32 AM