In grades 1, 2, 3, we played this variation of dots & boxes: Mathify the Squares Game.

I'm enthusiastic about this game, but can't resist a quick comment about the "mathification." Dots & boxes is already a mathematical activity, it doesn't need to be "mathified." This term implies confusing arithmetic and calculation with math, something I've written about elsewhere and, I hope, is clearly not implied by our blog.

In any case, I'll use the shorthand MD&B to refer to this dots and boxes variation.


Notes from playing in class 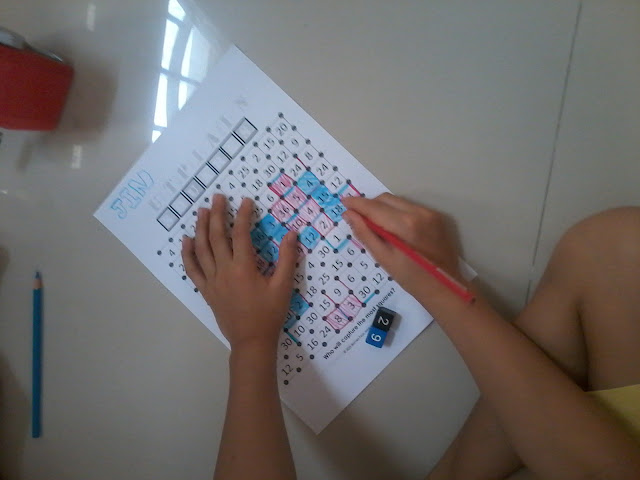 In class, we first introduced the kids to vanilla Dots & Boxes with a pre-printed grid of dots. We knew that it would be too much to play on a lattice covering the whole A4 sheet, but we thought a quarter of the grid would work. That turned out to be too big and the game started to seem monotonous to the kids as there was too much time spent on the opening (playing on squares that don't yet have any filled sides.)

We rectified this problem in 3rd grade and played on much smaller grids, with sizes between 7x7 lattices (which yield 6x6 squares) and 10x10.

After they were comfortable with the vanilla game, we introduced the product version with dice. In our case, we just had the players take turns and didn't give an extra turn when someone completed a square.

Some rule variations
There are some simple variations depending on how you deal with completed squares:


Of course, you could also make the extra turn optional instead of compulsory. You might also have some ideas about different ways to handle cases where there are no more free sides on squares with the required number value.

Dice games naturally lead to probability questions. Here were two that I really liked, based on scenarios from a recent game play:

What question are we asking?
What is the chance a player will get both the 20 and 36 boxes: 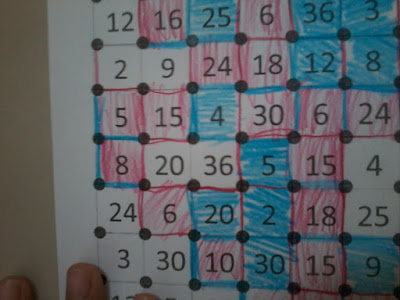 One great answer was 1/2. The reasoning: we are going to play until all boxes are filled and each of us have an equal chance to fill this box, so 1/2. This is not quite right, since the person who is about to roll has an advantage, but I thought it was an interesting interpretation of the question.

A 2x2 square
In this configuration, what is the probability that the next throw will allow the player to complete a box in the 4-30-25-15 zone? 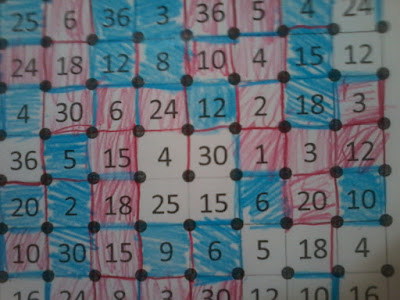 One of the reasons I thought this D&B variation was so cool is because of our games matrix. Whenever we play games, J1 and I talk about some key characteristics of the game, particularly the amount of randomness and the strategic complexity. These are not entirely independent dimensions, since a larger amount of randomness reduces the number or importance of each player decision, thus the strategic depth.

The mechanics of this game gave us some ideas about how to dial up or down the amount of randomness in this family of games. Here is our list of members of this family, roughly ordered from least random to most random:


Ideas for other games

I'm excited to see what other games we can modify use the underlying idea from the MD&B variation. To be clear: use numbers to label parts of the game and then constrain the players' actions based on a die roll to involve either the pieces with corresponding labels or board positions with those labels.

If you have some favorites, I would love to hear in the comments!

*Update*
Playing through the MD&B version several times, we came up with these rule variations that are worth your consideration:


I think our favorite was a combination of all three of these components. Mixing 2a and b, you have to be careful to keep track of whose turn it is, but it lead helped bring out elements of strategy and more thinking about probability.

*Update 2*
Game phases
Above, we talked about how A4 (or even 1/4 of an A4, which I guess is equivalent to A6) is too big for beginning players of Dots & Boxes. They found the game "boring." J1 and I talked about this experience and it led us to considerations around game phases: opening, middle game, and end game. These are terms we first learned in chess, and we found it useful to contrast the two games.
Here were some observations:


What we realized is that the larger playing area for D&B significantly increases the length of the opening. Because this phase is the least connected with capturing boxes, it is the hardest for beginning players to see how their choices ultimate lead to scoring and it is the phase with the most available choices on a turn.
Posted by JGR314 at 9:39 PM