If, like me from one month ago, you don't know about surreal numbers, I think you'll find they can be a really engaging exploration with kids. The main attraction is the appearance of infinities and infinitesimals, both of which really seem to resonate with young mathematicians. In addition, there's fantastic icing on this cake, too: you can explore by playing a simple (to learn) game with a lot of depth.

Credits: this exploration is strongly inspired by Mike Lawler's recent posts about surreal numbers and the Jim Propp post that inspired him. If you are interested in doing this type of exploration with your kids, I strongly suggest going through all of their posts on the subject.

Note: since we used black and red checkers, while the convention in the other posts is blue and red, I will abbreviate B and R so you can naturally substitute your own preferred color scheme.

This was a good initial example because it let us talk about each of the major scenarios:


Then, I explained the losing condition: if you don't have any more moves, you lose. They quickly realized this was the same as when they no longer had any checkers of their own color on the board.

Next, we quickly played a set of simple games:
Connecting with numbers
I told them that one amazing thing is that we can give each game position a value. Then went through:
Powers of 1/2
The first really juicy bit came when I asked what they thought the value of a BR stack would be. This established a common sequence of investigations:
Next stop was RB. I wanted to make sure negatives weren't left out and to reinforce the symmetry in the colors, so would ask them to swap the colors and get a value as a quick follow-up.

Next, I asked them to see if they could find a configuration with value 1/4. This took a long time and there were lots of false starts. I didn't think this would be easy and didn't help them shortcut the exploration.

Once they got 1/4, though, they had a fast guess about 1/8. We checked it and then they made a conjecture about further powers of 1/2.

Deep blue and red
Seeing powers of 2 in some form is always fun, but both knew that they had been promised infinity and wanted to see it. Using our plastic dinosaurs, I introduced the deep checkers deep blue (represented by a blue mini) and deep red (represented by an orange mini).

Our sequence for these was similar to the powers of 1/2. The value of deep blue is positive, so they compared to 1 by playing the game BBBB.....+R. Each had a sparkle of insight, but quickly played BBB.....+R+R+R just to check, then announced that the value would be bigger than any integer.
I gave them the name omega, and we checked the deep red: RRRR.....

A little bit about deep purple
The two kids were totally satisfied now, having gotten omega and epsilon (along with omega +1, epsilon - 1, omega + epsilon, etc). To give them something to chew on for later (and because we had purple dinosaurs in our set) I introduced the deep purple, BRBRBRBR.... Immediately, they designated the yellow dinosaurs as the inverse of deep purple (RBRBRBRB.....)

So, what's the value of deep purple? What they've gotten so far:
Wrap up videos
As a round-up in the evening, we watched the videos from the first post in Mike Lawler's sequence. I paused frequently to let my two shout out their answers and explanations for where Mike's boys were in their exploration. This seemed to be a very effective way to underline their experience for the day.

Number match on the number stairs

A game for J3. This is a simple game with some variations that makes use of our stairway "number line" and a three year old's natural enthusiasm for running up and jumping down stairs.

As pictured previously, we have labeled the stairs in our house from 0 to 36 (more to come). We have a set of cards with numbers on them. P mixes them up, then gives them, one at a time, to J3 to put on the corresponding step, and they sing count up and down: 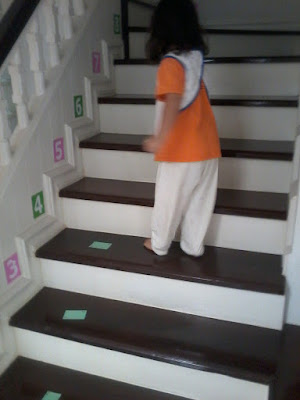 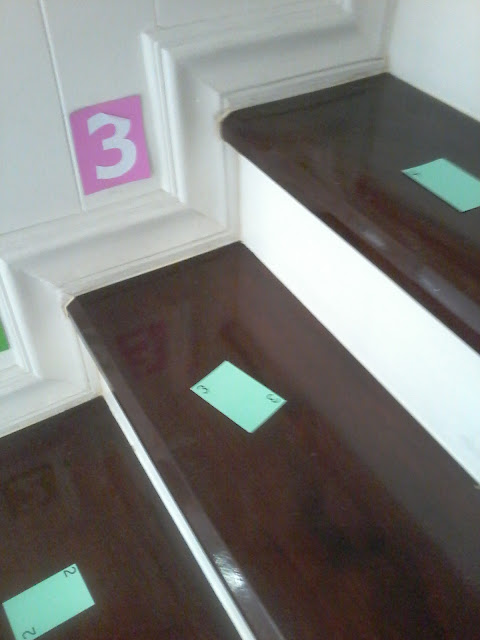 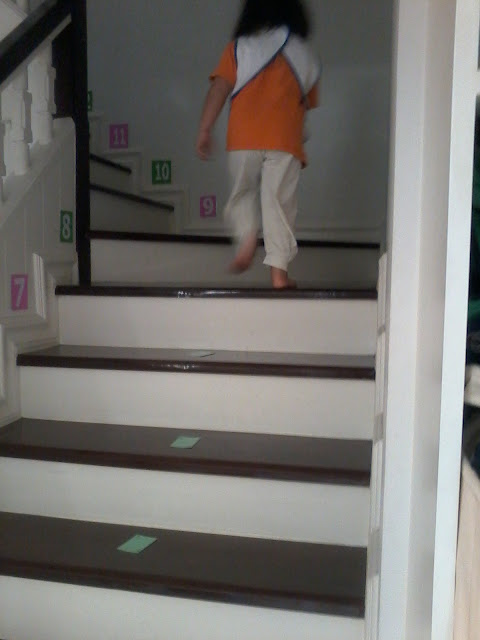 In case you missed it, pillow forts have been in fashion recently. Here is an example: 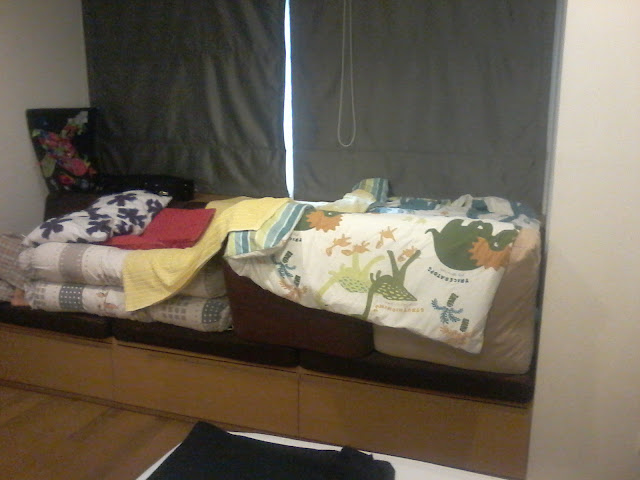