Late last year, Joe Schwartz wrote a very interesting post about the difficulties one student is having with counting and skip counting. I recall hearing a theory that many later math difficulties trace back to when a student missed solidifying the concept of one-to-one correspondence and some related concepts of counting (but don't have a citation or reference). As a result, I was thinking about how our little J's understand these ideas.

In particular, I wanted to try out Marilyn Burn's little game from one of her comments with J3: 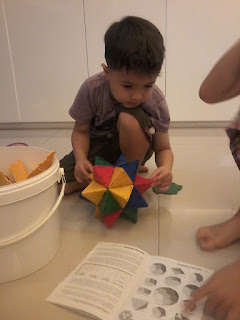 Before I had a chance to try out the question sequence with J3, I had some time alone with J2. He was sorting colored pencils, so we used those as counters. Overall, he breezed through the questions, but there were two amusing points: 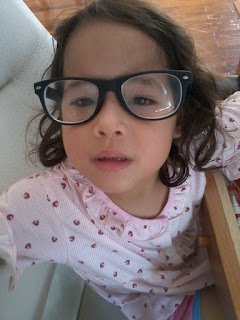 My counting time with J3 came during dinner. She was eating cucumber slices, so we used these as counters. This turned out to be a mistake, since conservation doesn't work with edible counters! In other words, whenever I asked her how many slices were in our cluster, she would pop one in her mouth and smile, knowing that she was teasing me.

Mainly, though, I was able to verify that she doesn't yet have the concepts that allow short-cuts to the questions in Marilyn's sequence and needed to recount to get all the answers.

Incidentally, I started the activity by telling her that we were going to count something together. She immediately grabbed this coaster and then accurately counted the circles to 37. 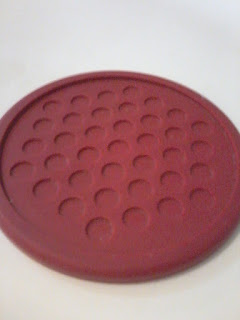 For me, the entire experience was a really interesting illustration that counting actually requires a complex collection of sub-skills.
Posted by JGR314 at 10:50 PM