Who: everyone in the family
When: over the last week
What material did we use: see below, a lot of different goodies
Where: all over the house
We haven't posted many activity summaries recently, so this is a review of what we have been doing so that you don't think we've been slacking off.

Calculating and Roman Numerals
Remember my doubts about roman numerals when they were introduced (here)? P has since found that they come up frequently when J1 and J2 are discussing some other calculation (adding 2 digit numbers without paper and pencil was a recent one).  It seems that the kids like the process of conversion or the feeling that they are speaking in a type of code.

Mathsemantically, they appear to appreciate the idea that number names are not the same as number concept. Frankly, I don't know when they developed this appreciation as we've always been a bilingual household (Thai and English) and introduced counting in other languages (Spanish, German, Chinese, Korean, Tagalog, Armenian) when they were very young.

Tip: for kids around 7 years old, try introducing the numbers in a different language and see if they enjoy the disassociation of names and objects as they play with calculations.

Food Math
We've had another round of pizza dough (with J3, our 2 year old) and our first attempt at gougeres (J1 and J2).  The pizza dough with J3 went as usual: a lot of fun measuring, a bit of flour outside the mixing bowl, excessive use of the scale to weigh whatever she saw.

The gougeres were a dairy indulgence, with milk, butter, and cheese as main ingredients. This was my first opportunity to try them since J3, our dairy intolerant one, was out for the day with mommy. We roughly followed this recipe, halved because the remaining munchkins had already decided they wouldn't like them and I couldn't justify eating 20-30 cheese puffs myself (and I'm not generous enough to share them with anyone else). In any case, by the time I thought to snap a picture, we only had 5 left for a nice little pentagonal arrangement. 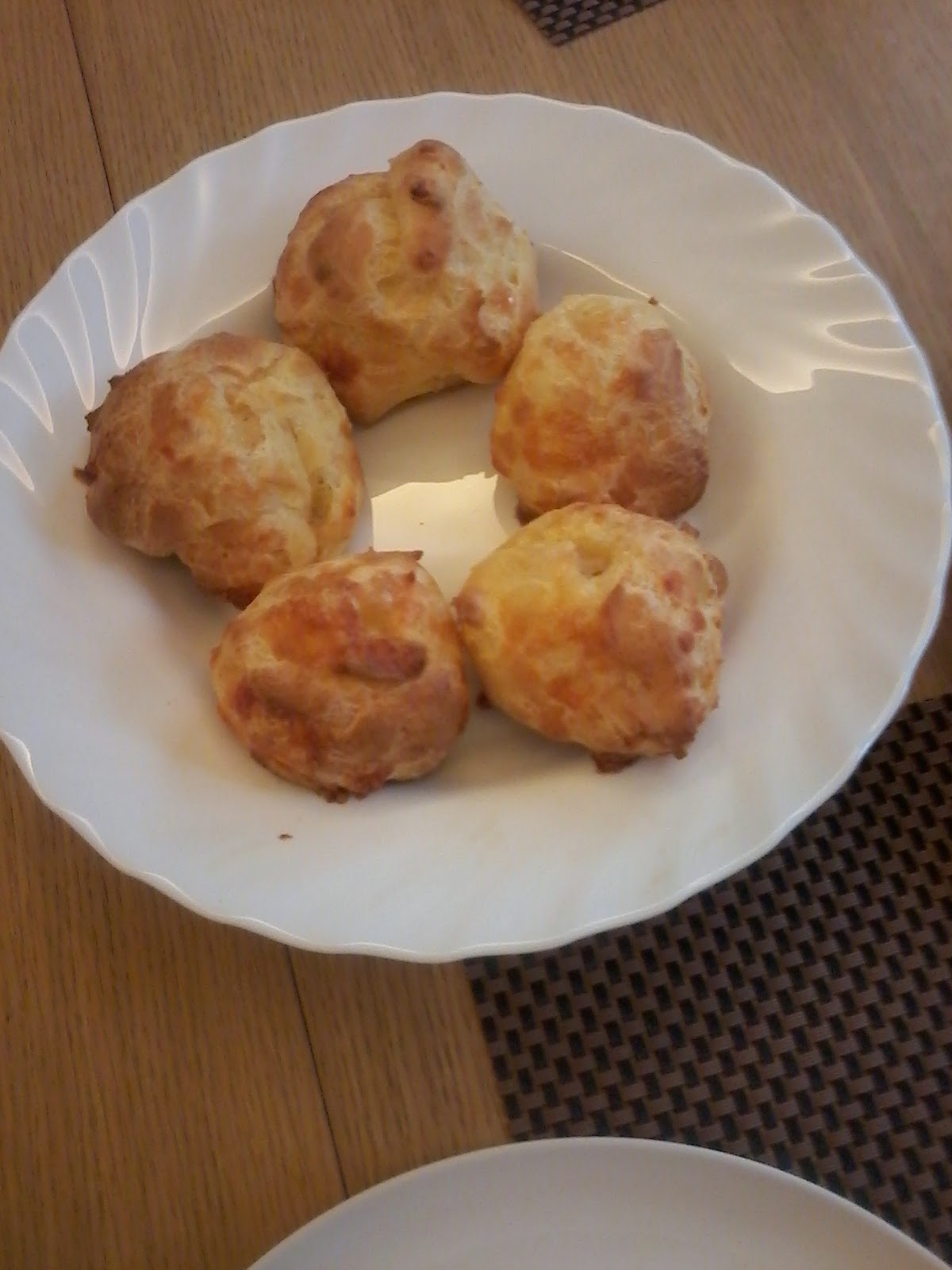 Mathematically, the activity was interesting because we halved the recipe and we had a debate about how many eggs to use. While the presenter explicitly says 5 eggs, both boys were sure we only saw her use three and we all agreed that she had reserved one for the egg wash. Coincidentally, P brought home some very small eggs later in the day, so we got to have a little (very little) discussion of whether one egg is a proper measure. I'll have to remember to return to that again.

As we've hinted on other occasions, we try to recognize little unplanned opportunities for inserting some numerical discussion into everyday conversation.  Quesadillas at lunch were a chance to talk about fractional parts of a circle based on 1/8.  Below is one serving in the 6/8 (aka 3/4) uneaten state: 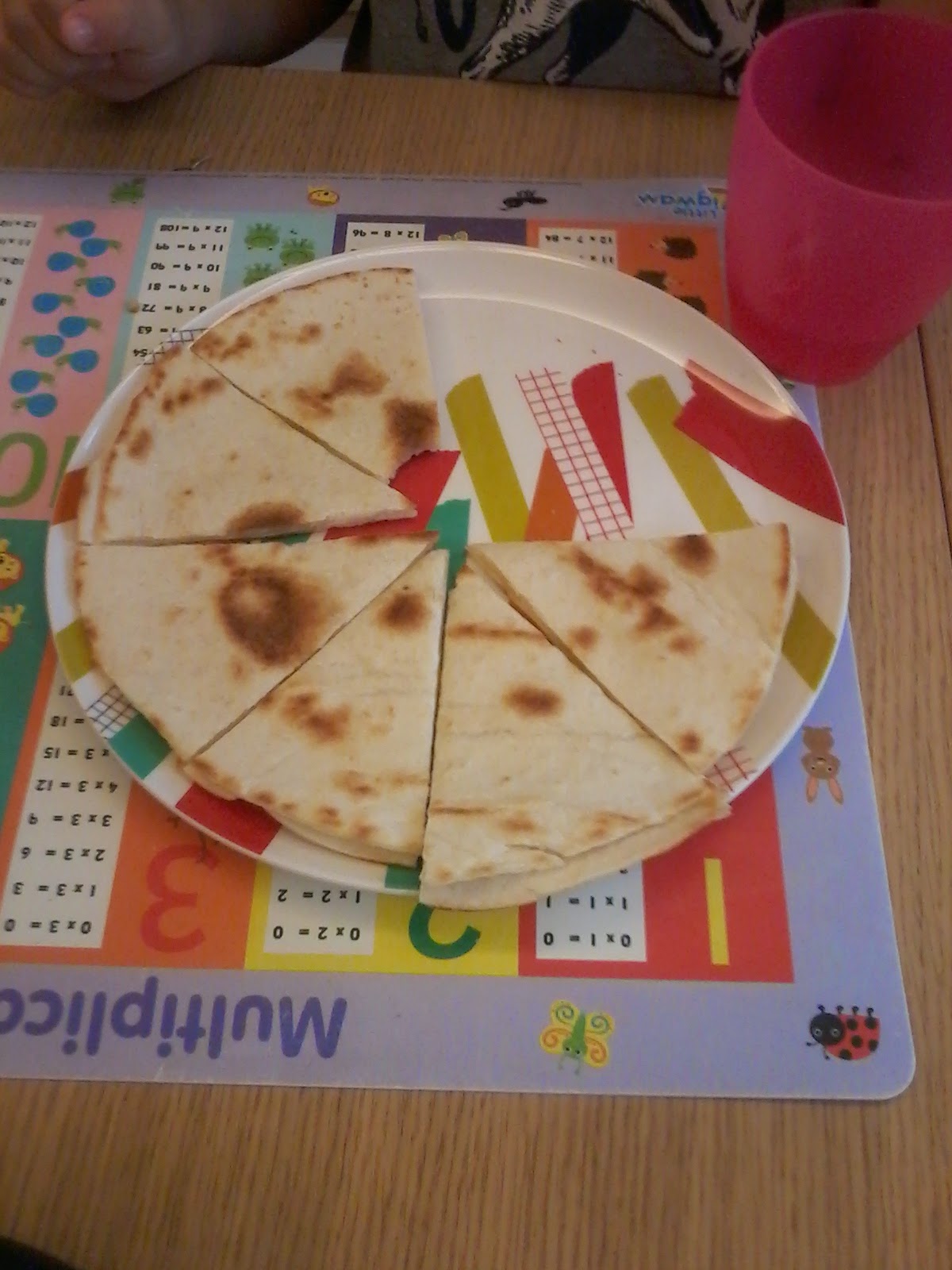 Some bites and a cheeky smile later brought us: "daddy, what about this one?" 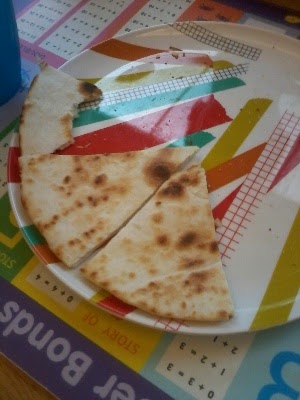 I offered 1/3rd of an 1/8th for the partially eaten piece and we calculated that this plate still had 7/24th. Maybe I should have rushed to get a clock and show them 3.5 hours?

Catan (Catan, Catan)
Somehow, Settlers of Catan got back on J1's radar and he's been asking to play it everyday for a while. We are still working on a version that fully integrates J2 and it is a bit stale without trading between players.  I tried to introduce a bit of trading today, but J1 was too suspicious of my motives and would rather trade at an unfavorable rate with the bank than trade with me.  For now, we still start him with 2 cities against my 2 settlements, and we also allow all the players to start with the resources from all the hexes associated with both of their developments.  Otherwise, we find the game takes too long to get moving.

You can see J1 (red) in the process of beating me (orange) below: 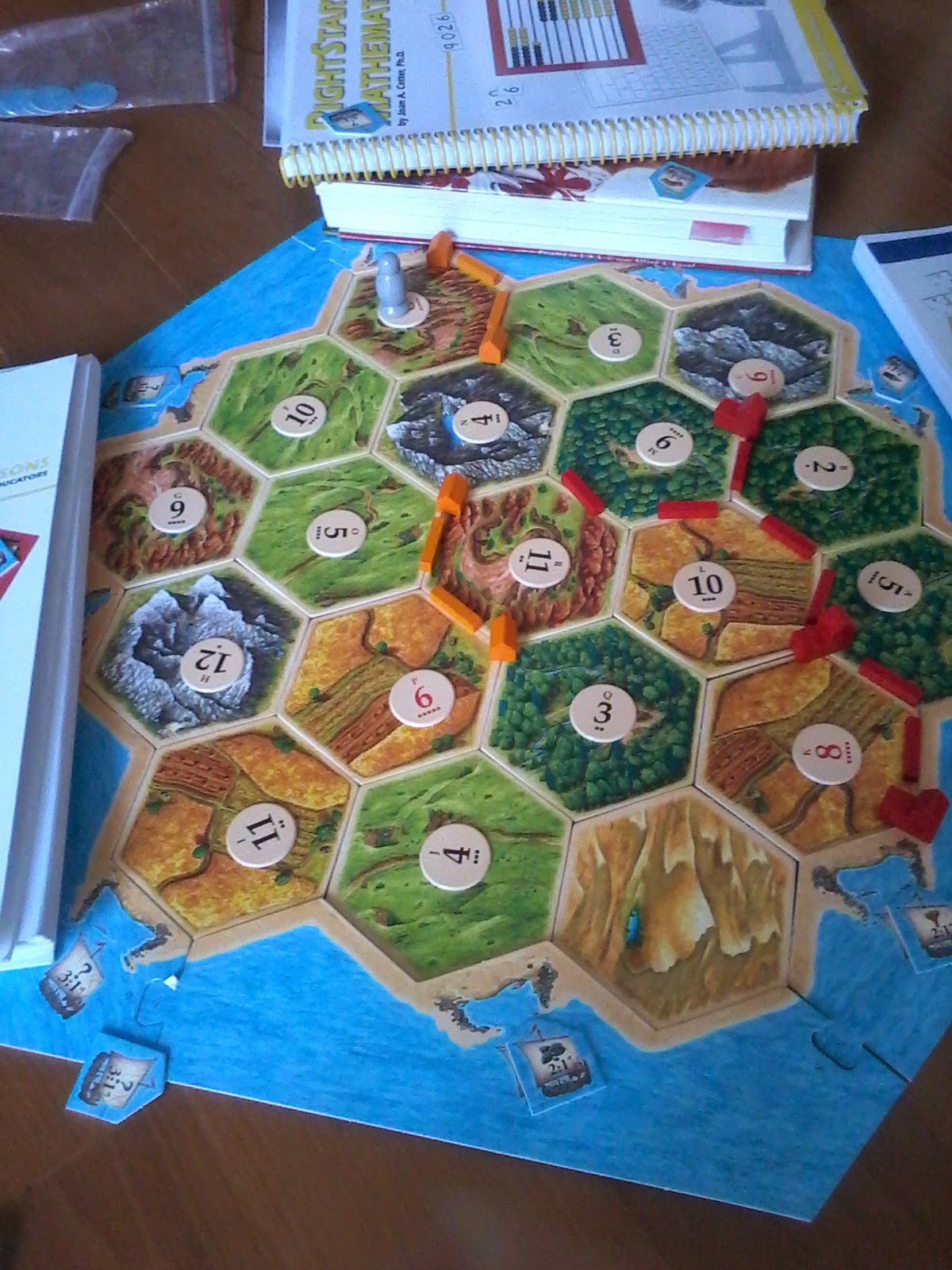 I can tell these sessions have started to develop his intuition for dice probability.  When allowed to set up a board configuration of his own choosing, he put the 6s, 8s and 9s together on the hexes associated with his developments.

And some geometric designs from J2 while he was watching us play: 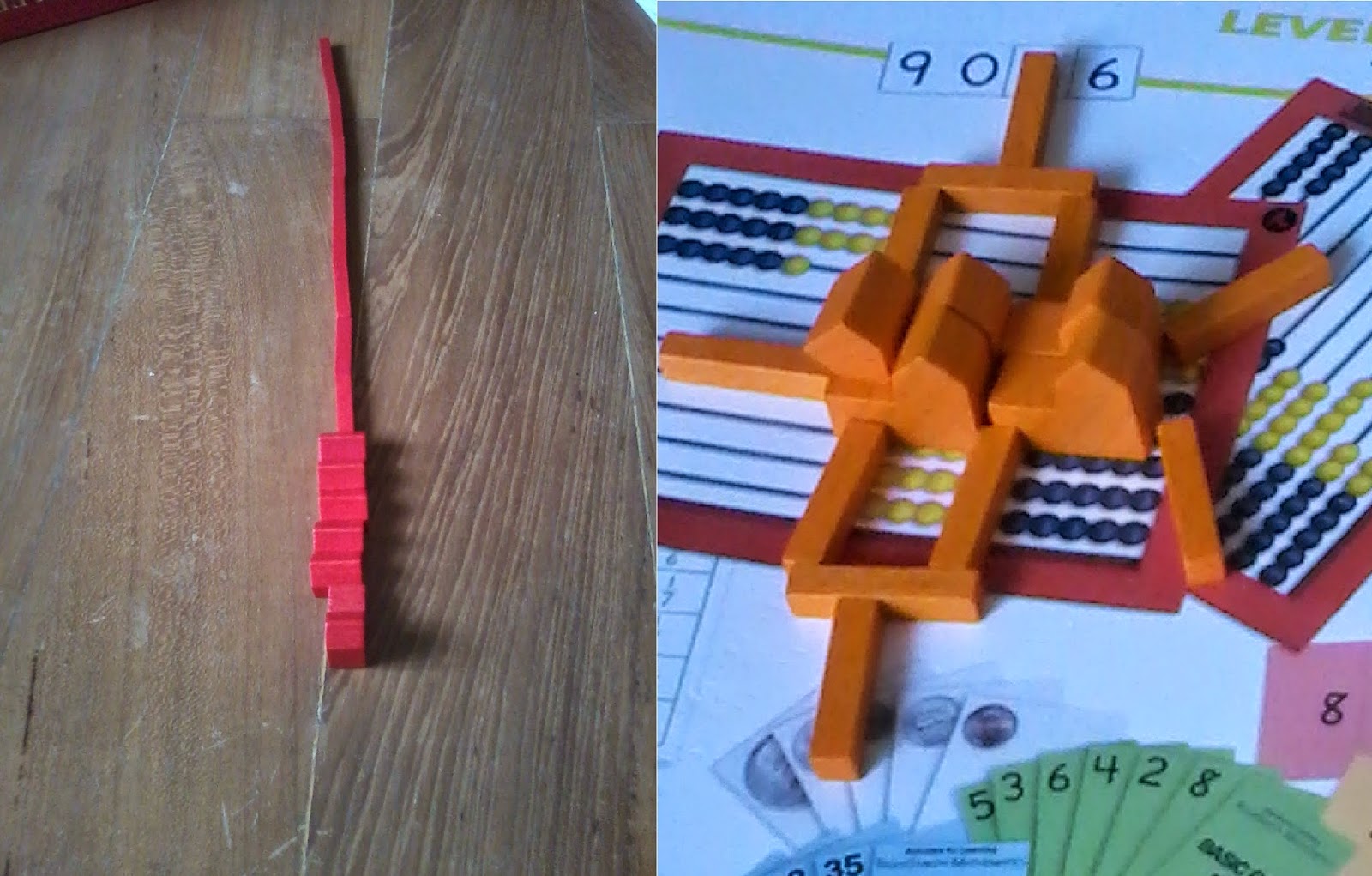 Hexaflexagons
I plan to have more discussion of this tomorrow after our math party. For now, suffice it to say that I made some flexagons, left them around the house, and both the boys were really excited to make, decorate, and investigate them.  Almost all of them are trihexaflexagons, so that's what they've come to expect.  I gave J1 a hexahexflexagon with numbered faces and he was delighted to discover the extra faces.  I'm looking forward to seeing how the other first graders respond.

Since it isn't fair to entirely leave you hanging, I'd refer you to this Vi Hart video for a great intro to flexagons: http://www.youtube.com/watch?v=VIVIegSt81k