Please read for the *questions* below as I'd love to have your thoughts in the comments.

Who: Baan Pathomtham 1st grade class (J1's class)
Where: at school
When: 2 hours Tuesday morning
We (P and J0) got a chance to spend the morning talking about subtraction with J1 and his classmates. It was an opportunity to see some differences between talking math one-on-one (or one-on-two) and a larger group.  Here are a couple of tidbits from the discussion.

Practice with poker chips
Of course all children need to be familiar with the standard gambling implements: dice, cards, and poker chips. The first two are already well known, so we did an activity with poker chips this time. How would you count all the chips in the picture?  Well, what if "you" were actually a group of 3 first graders? 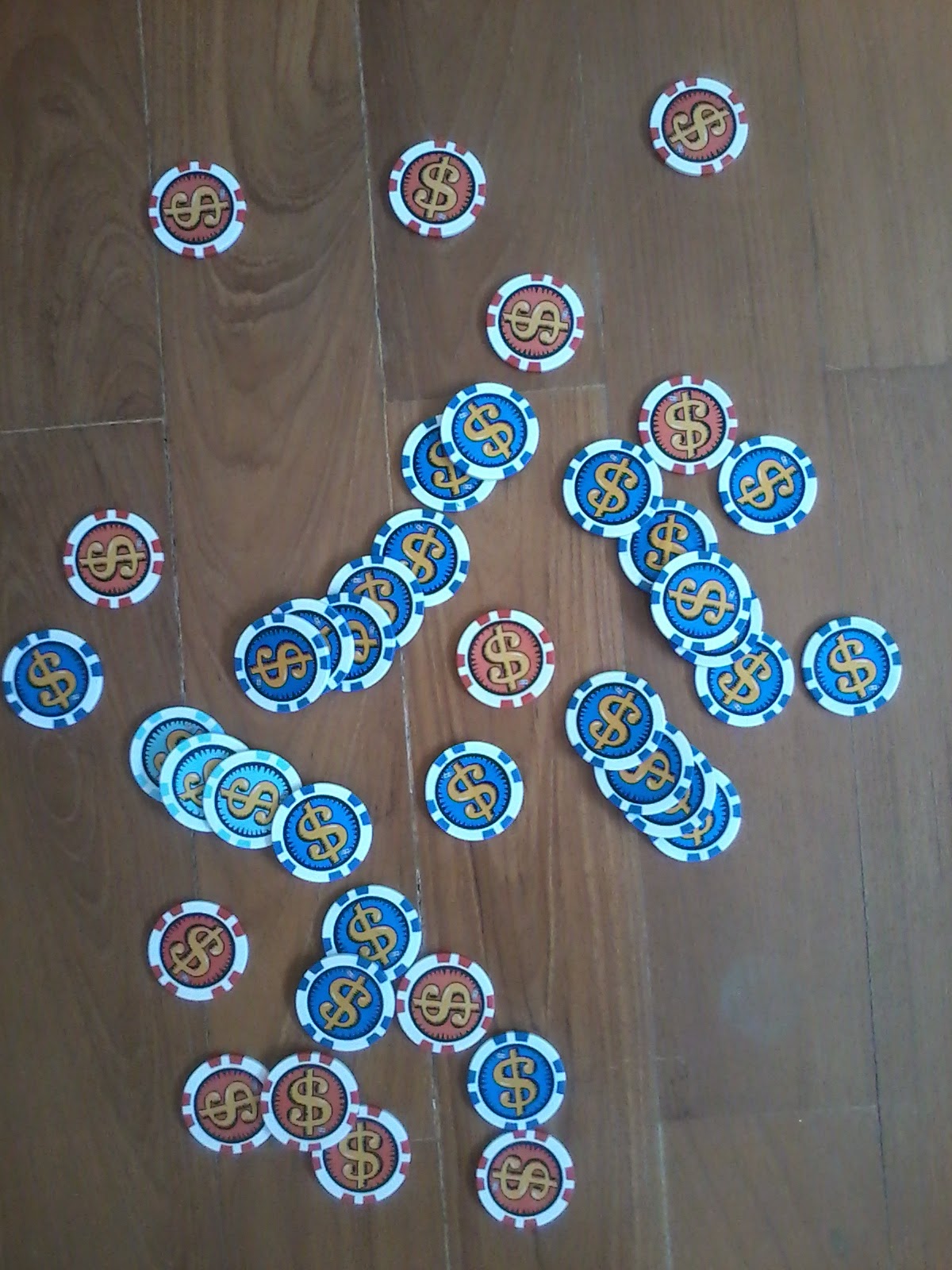 Here's the strategy one group implemented, spontaneously, as far as I could tell:
(1) divide the chips into equal piles for each child
(2) count the remainder in the center of the pile (in this case, one chip, so the count was trivial and done without an explicit effort)
(3) take turns putting one new chip into the pile
(4) all count together as the new chips are added

Actually, this was their second strategy. At first, it was a free-for-all with all three trying to count all the chips and messing up each others division between counted and uncounted chips.

Note: counting the chips was just accidental to the activity we were doing, so this shared counting strategy was just a cool thing we noticed along the way. If it had been more central, I would have talked with them about the equal piles at the start (which links with multiplication) and why there was a remainder (which links to the division algorithm).

Enthusiasm
Most importantly, the kids were all really excited and enjoyed working on math. They liked asking mathematical questions about a picture we presented, had fun doing calculations, trying new modeling tasks, and playing the mathematical game.

This confirms, once again, that enthusiasm and curiousity are things we (usually) kill during the educational process.  Not at our school!

Explaining
Given their enthusiasm and apparent facility with the calculations, I was surprised that they struggled to explain their calculating strategies. I can't tell if this is a language issue, if the calculations they were asked to describe are so ingrained that they don't consciously think about them, or if they don't really understand what they are doing.

My key take-away: I will focus a lot more of my discussion time on getting the J's to talk about how they calculated something, see if they can draw a picture, and see if they can explain using a concrete object.

Extensions
As preparation, P and I talked about 3 models of subtraction: taking away, differences, and counting back. P made two comments:
(1) Word problems are harder than straight calculations (said while we were discussing what types of problems to use to have the kids investigate the three models)
(2) "Counting back is such a waste, I always knew the answer through another method and had to artificially demonstrate counting back."

Word problems seemed, to me, the natural way to motivate using a particular model for subtraction. For three quick examples:


*Question* is this the wrong way to use alternative models? Is it necessary to force them to use "unnatural" models to demonstrate proficiency (for example, using take-away to resolve the differences question)? Does this create difficulties for problems involving alternative missing values in the same types of questions (i.e., you started with 10 cakes and now have 3, how many did you give away?)

Counting back is the same as the movement model, which I called "forward movement" in my post on addition models. This model leads nicely and really easily to emphasizing the role of 0, negative numbers, and subtraction of negatives. Looking a bit farther ahead, it links with vector addition by just extending our operation to more dimensions. Taken along another path (ha, the puns!) it can be used for modular arithmetic (replace directed movement on a straight line with directed movement on a circle).
Posted by JGR314 at 8:28 AM