who: J1 (and occasionally J2)
when: many times this weekend, whenever we have some free time
where: wherever it is safe from J3's disruption
what: another game
Your friend is level six, armed with a grand collection of magic items (bonuses shown below) and has just started fighting the Stoned Golem. You could add a wandering Squidzilla to the battle and are trying to decide whether you need to add extra intelligence (+5 for the monsters' side).  Time to do some calculating . . . 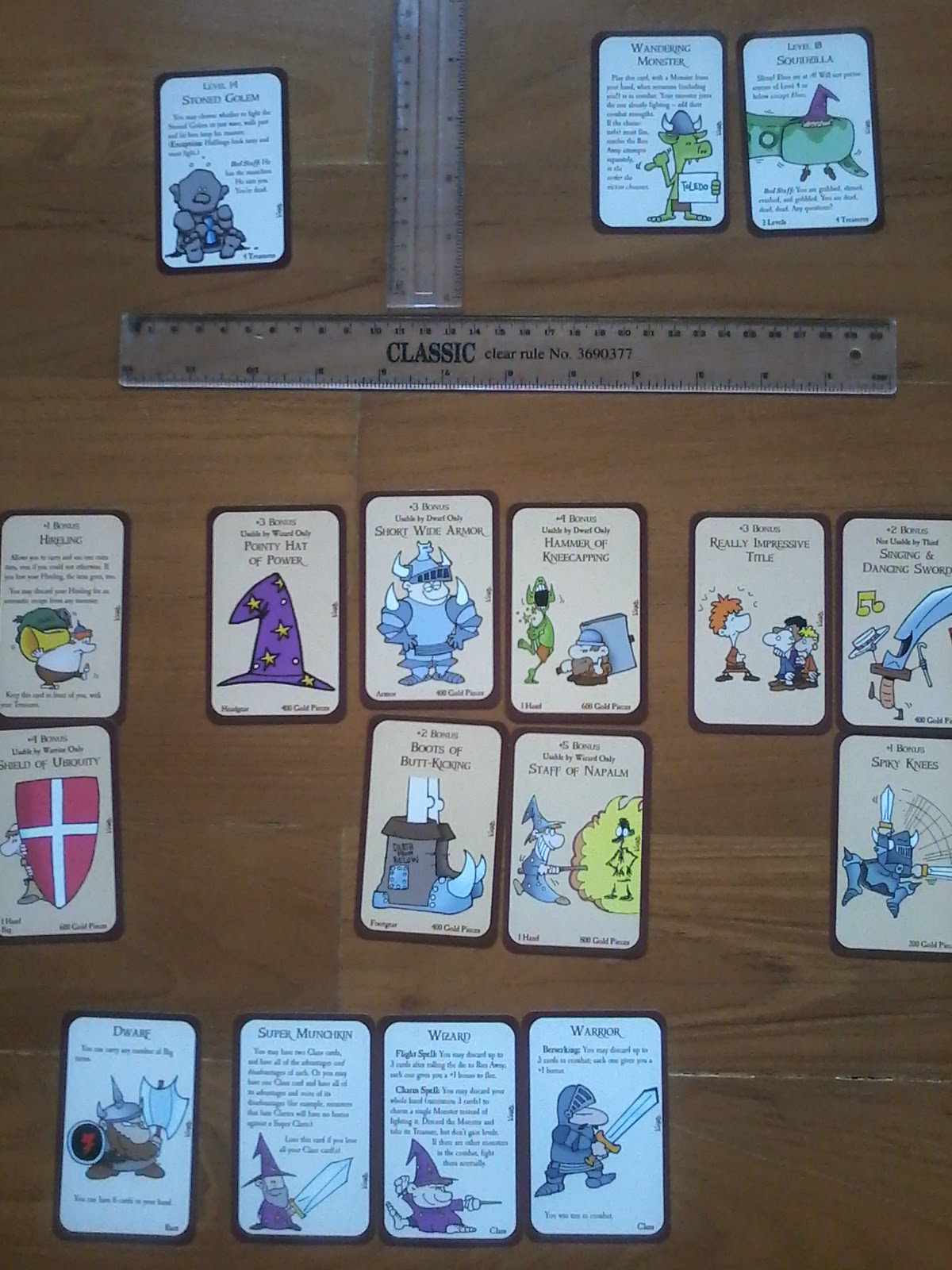 We just started playing Munchkin together and J1 really loves it.  As you can see from the cards, it is a bit silly, fairly fast to play, and strategically simple. Also, unsurprisingly, the build-as-you-play characters really appeal to J1's 7 year old sense of gaming and achievement. I say "unsurprising" as this was part of the idea for the game, though in that context it was formulated as a parody take on the unsophisticated attitude of some players in role-playing games.

What do they learn?
First, many of the rules of the game are written on the cards themselves.  Look at the picture.  That wizard card is full of text explaining the strengths (most of them) and weaknesses (some of them) of being a wizard. J1 is at the level that he can read all the cards, but it takes some effort and is good practice for him.

Second, the basic game mechanic is really about repeated addition.  Every battle consists of simply comparing your combat strength to your opponents combat strength.  That means you start with a base level and add a collection of bonus or penalty modifiers.  As a result, most of the additions are +1, +2, +3, but powerful characters (like above) inspire a search for more efficient strategies than just adding every card individually.  That means grouping, skip counting, and multiplying.

In addition, there are opportunities to add wandering monsters to a battle and to double a monster, or fighting character. For a final extra set of calculations, the players can sell their treasure (value noted on the bottom of each card) for levels that determine the game winner.

On a more sophisticated level, they start to detect (more subtle) patterns.  For example, what are the weaknesses to playing as an elf?  They aren't listed on the elf cards, but you recognize them over time when you see that many of the monsters get an automatic bonus when they fight an elf.  Similarly, the listed benefits of playing as a dwarf seem minor, but then there are some powerful magical weapons and armour that are only available for dwarves.

Is it fun, as a game?
Yes, but . . .
One key element of the game is backstabbing your friends (the other players). Sometimes you help them, sometimes you harass them, sometimes you do both at the same time! However, like we experienced with Settlers of Catan, this type of game isn't for J2 (yet?) He was turned off the first time he thought he was going to defeat a monster and then J1 added an extra monster to the battle.

For more sophisticated players, there is probably a sweet spot for maximum enjoyment.  People who have some experience with D&D will enjoy the little puns and jokes more.  However, the game play is really simple, randomness is high and strategic choices are limited.

If you are in Bangkok, you are welcome to come play a round with us!