Who: J2
Where: at home on the dining room floor
When: just before dinner
Last night, we practiced counting without counting. Blocked from J2's view, I put xiangqi (chinese chess) pieces on the ground, asked him how many and gave him 3 seconds to see, then covered them again.

I started with the 3 black pieces, then did 4 red (the top two quadrants below). Three seconds was really too long as he was able to count them, so this level was easy.

Next, I combined the two previous groups (bottom left quadrant). 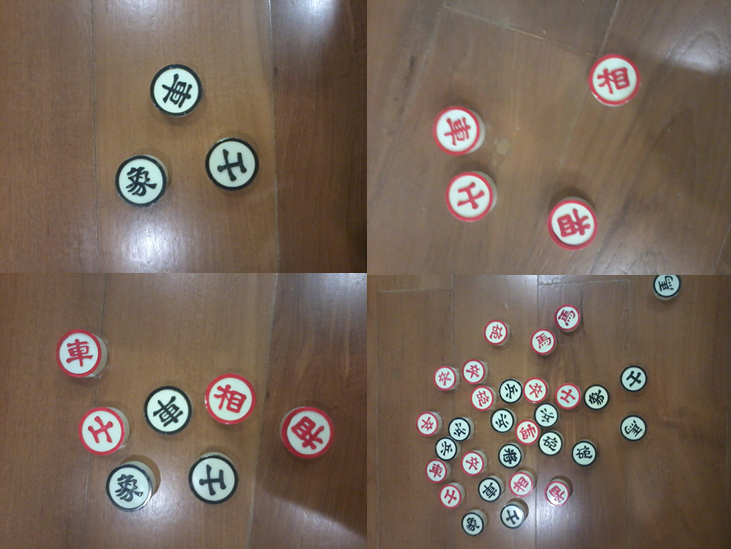 He answered 8, quite confidently.  When I removed the cover and counted them, he was frustrated. Instead of persisting with more examples,  I asked him to make a challenge for me.

Smiling mischievously, he asked if I was ready and then uncovered the configuration in the bottom right. Well, of course, I couldn't count them all and I couldn't work out any subgroups that would help me count clusters.  I said "I'm not sure, but I think there are 30."

Here's my thought process:
- from a visual estimation, I thought there were more than 20
- I guessed that he had used all the pieces and, as with western chess, there are 32 pieces in a full set
- Because he had been frustrated on his last round, I didn't want to get the answer right. I wanted to get close and then have a discussion about getting it a bit wrong.

J2 proceeded to count them and there were 30! Oh no! He was stunned, not the intended outcome.

Turns out that little J3 had stolen two of the pieces earlier in the evening
Posted by JGR314 at 10:45 PM