In past posts, we've shown some of the make-shift materials we are using to play/learn Go without a proper set. Over the last two days, we had experiences that reinforce the value of this approach.

Exploring an earlier pattern
First, when playing with J3, she noticed that we could complete a repeating blue-green-yellow-red pattern around the boundary of a 5x5 board. In a follow-up conversation with J1 and J2, we explored this: 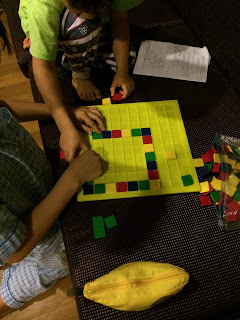 J2 had a new idea. He thought we were talking about the pattern continuing as an inward spiral.  That gave us this design: 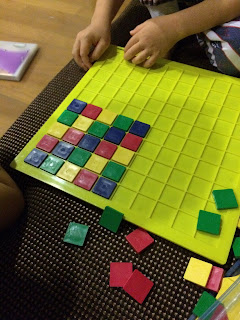 This also led to discussions about symmetry (the blue and yellow have reflectional symmetries that green and red lack) and further investigation on boards of different sizes. Interestingly, we found that, for some boards, none of the colors have a reflection symmetry.

Trying some tsumego
I set J1 and J2 the following challenge (J3 was watching): are the blue cubes alive or dead in each of these two clusters? 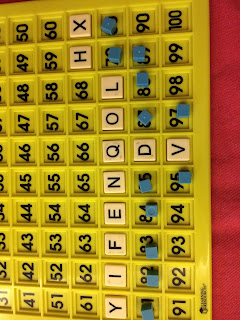 Putting aside the interesting Go discussion that resulted, there are two consequences of doing this on the 100 board: extra unnecessary information and a built-in coordinate system. By unnecessary information, I'm talking about the letters on the white tiles and the numbers on the 100 board. This is information that is entirely orthogonal to solving the life-and-death puzzles. This is a simple toy version of one of the key modern challenges in problem solving: identifying which information is useful and which is a distraction.

On the other hand, for talking about the puzzles, we could say things like "what if white plays a tile on 99?" For J3 who was watching, this offered another little example of the idea that numbers are all around. 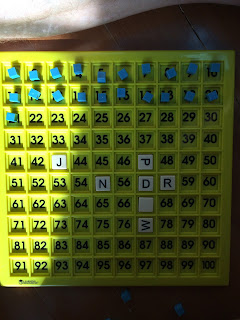 For the last example, I set out some white tiles (some alone, some in groups) and asked J3 to capture them with blue cubes. After we did that, we counted the number of cubes we used to capture by moving them to cells in the 100 board (note that we removed one of the lone white tiles). A fun counting exercise, an opportunity to talk about groups of 10, and more familiarization with the layout of the 100 board.