Benjamin Leis (who posts at Running a Math Club) flagged this video in response to our recent fractions work: Funny Fractions and Ford Circles (Numberphile). ﻿

Ex ante discussion ideas
The video gave me several ideas for possibly interesting conversations with the kids:
(1) Some basic geometry, particularly for J3. Circles that are tangent, nesting pictures, pictures that have fractal qualities.
(2) Comparing Farey addition and regular addition
(3) Well-defined operations on fractions. I always like to discuss whether the operations gives us the same results regardless of the equivalent form we start with? Farey addition is a good example where the choice of representation is important (indeed, Prof Banahon is careful to keep reminding us that he wants the fractions in lowest terms.)
(4) why do we want the fractions in simplest terms? Possibly relate this to the Cat in Numberland (showing rationals are countable).
(5) what happens if we try Farey addition of three fractions in a row: e.g., (1/5) @ (1/3) @ (1/2)? This is one of the few "naturally occurring" non-associative operations I know.
(6) Since associativity doesn't work, surely distribution of multiplication over Farey addition must not work, right? What about commutativity?
(7) Linking back with our comparison game, if a<b, how do a@c and b@c compare? If a@c < b@c, what can we say about a and b?
(8) what if we allow negative numbers? How should we define Farey addition, then?

How the conversation actually went
J2 was especially taken with the picture of the Ford circles and immediately had two requests: he wanted to draw them and he wanted me to create a pencilcode program to draw them.

The former was a great activity with a lot of figuring and fraction practice. Here he is, hard at work: 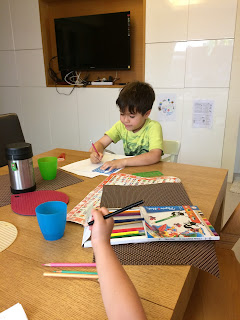 Along the way, there was lots of discussion about where to position each fraction on the number line (he scaled with 20 cm as the unit distance from 0 to 1), and how big to make each circle. Tangency condition was a nice check on his work. He would see right away when something was wrong (which did happen several times: 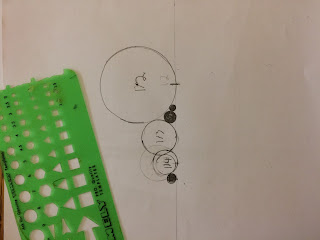 We did talk through some of the ideas on my pre-planned list: is Farey addition well-defined on fractions (no! point 3), does associativity work (no! point 5), could we extend to negative numbers (yes, make the numerator negative seems to work best, point 8).  Other areas are still open for future discussion. 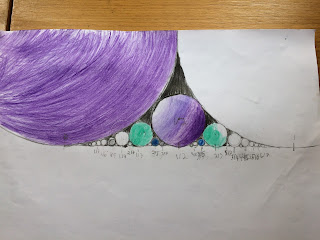 Pencilcode result
I wrote a quick program here: FareyFord. You'll notice that it doesn't actually generate Farey sequences. Instead, it creates generations of fractions, starting from 0 and 1 as the original parents. For each new generation, it uses Farey addition to create a new fraction between each adjacent pair in the previous generation.

Here's a picture of the associated Ford circles: 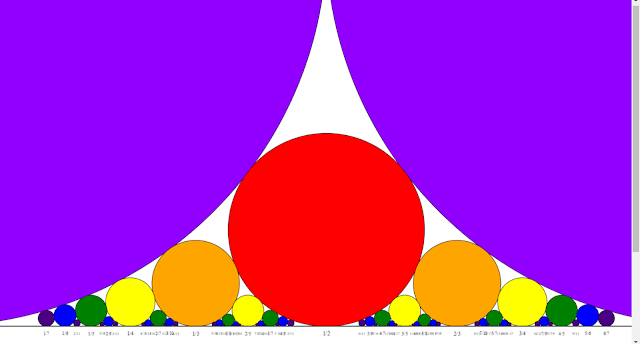 This method raised an interesting question: what is the largest denominator in each generation? If you don't know, it is cute and worth considering.

More Go (miscellaneous)
Note: this part is unrelated to fractions or farey sequences.

J3 wasn't in the mood to play more capture go with me, but I had an idea. I noticed in one of Nick Sibicky's lectures that one of his students was a young girl, roughly around the age of our three kids. I showed that part of the video to J3 and she made the connection: "this is something girls like me do."

We went and played some silly games on very small boards: 1x1, 2x2, 3x3. In the picture below, we set out a blue-green alternating boundary around a 3x3 board. Then, I asked J3 how many different moves were available. She pointed first to the center, then I asked if there were any other spaces that were the same as the center, if we moved the board around or tipped ourselves upside down.

No, so we made the center red. What other moves? She then chose a side square and figured out that there were three other places that were equivalent. Those became yellow. Finally, we figured out that the four corners were also identical, so that gave us the final picture: 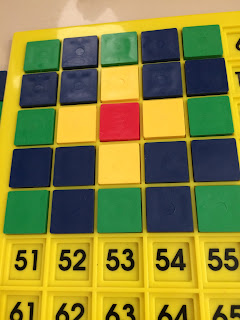 Later, I was playing 9x9 with J2. Instead of go stones, we used Banangram tiles for the white stones. At the end of the game, we tried to make words with the captured tiles from the game. Here was one case where we could (sort of?) make a complete scrabble chain with all the captures: 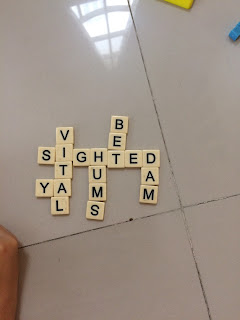