In my last post, I wrote about playing Denise Gaskins' closest neighbor fraction game with our 4th grade class. Yesterday, I spent time with J2 and used the game as a semi-cooperative puzzle.

This activity worked really well and the experience gave me some additional ideas about how to use the core ideas again with the 4th grade class.

Puzzle or game?
First, there were only two of us, one a kid and another an adult, so that background naturally makes the activity very different. As the key modification for play, we played all of our hands open and helped each other find the fraction in each of our hands that was closest to the target for that round. Then, we worked together to determine which of those two "champions" was closest overall.

Some of the consequences:
Let me explain the second point here. Because we were looking for the best play, J2 had to consider all of the combinations in his hand (20 choices). Some of those can be rejected quickly with simple analytical strategies depending on the target. Even this is good number sense thinking. Also, some combinations are close competitors and need to be analyzed more carefully.

If we were playing with closed hands, he could choose two cards, play a fraction based on them, and I wouldn't be able to say anything about whether those were his best options or not.

Second, while I write that "we worked together," as a sneaky dad, that means that I pretended to do work, while actually getting J2 to analyze my hand as well as his. Really, the only thing I offered was an alternative comparison strategy, once he had already worked through his own approach.

An example of some strategies
We found that some of the comparisons that arise naturally in this game are quite tricky, even for me. For example, quickly tell me which is closer to 1/3: 1/5 or 4/9?

We found that placing the fractions on a number line was a really helpful strategy for many of the comparisons. We also made very heavy use of the two strategies involving common numerators or common denominators.

Finally, you can see in this example that J2 is comfortable mixing decimals and fractions, for example converting to 1/2 to 3.5/7 to aid some comparison: 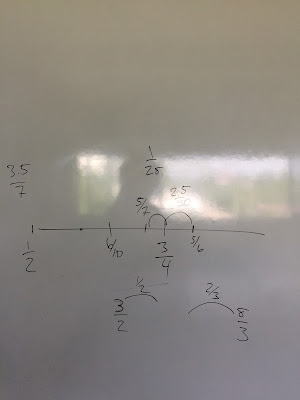 Our grid
Through our play, we filled out this grid, taking turns putting in our best results and congratulating each other when our hand was the ultimate champion for that round: 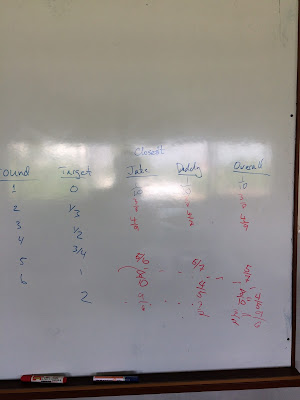 Competition and Strategic thinking
I was particularly pleased by one comment J2 made about this overall game: "this is mostly luck, how well we can play depends on the cards we get." This comment came after one round where he had several duplicate cards in his hand, reducing the number of distinct values he could play. We've discussed elsewhere my goals of helping the kids think about game structure, so I always love it when they bring those ideas up themselves.

It won't always be obvious what is the best way to play each game. In this case, I got to benefit from the prior experience with the class and my close knowledge of J2. Many times, I'll tell the kids that there are several ways to play and we'll try them out together, then review the experience.

Among other things, this is why I love handicap games like Go. By adjusting the starting advantages, we can create scenarios where it is very competitive and very fun, even though the players have very different levels of experience and current strength in the game. And also, there are things we can do together when we want a non-competitive activity.

Ideas for going back to class
From this time with J2, here are my ideas about taking the game back to the 4th grade class are:

As a reward for reading down this far, here's an actual puzzle related to the closest neighbors fraction game:


Remember, we are playing our game with a single deck of playing cards and each player is dealt five cards


The target for the next round will be 3/4


Burning 2 identical values might allow Jay to increase the diversity of her hand, especially if she happened to have 3 or 4 sixes.
Hey, life doesn't promise that all puzzles will have solutions that can be wrapped up in a nice neat package, does it?
Posted by JGR314 at 10:38 PM