Recently, I have been insinuating Go playing into my time with the 3 Js. This was initially motivated by a quote I saw on one of the Mathpickle pages (Gamers under Inspired People):


Schools should experiment teaching go* instead of a regular math curriculum for one year to students around the age of 7.  It is my prediction that the strong problem solving skills that this will engender will make superior students than any existing mathematics curriculum.

Now, when we first decided to have kids, my objective was to help them develop into people with whom I would enjoy spending time. In particular, I wanted to be able to play games with them. With that in mind, the Mathpickle idea resonated with another idea from Richard Garfield (via Math Hombre):


With these three ideas in mind, I went looking for a way to properly introduce Go to our clan.

Not surprisingly this is a question other gaming and math people have asked before. Quickly putting together the ideas I liked the most from other sources, we basically started following the curriculum shown in the Go GO Igo videos with Yoshihara Yukari (Umezawa Yukari at the time of filming):

- playing where your stone will have no liberties

- counting territory at the end of the game

How important is this?

Since we don't actually have a Go board or stones, we started with the electronic board CGoban. This works well for J1 and J2. We have also used J1's chess/checkers set as a makeshift 9x9 board (playing on the lines instead of the squares).

For J3, we started playing the simple capture game using the blank side of our 100 board.
For the first lesson, we arranged things like this: 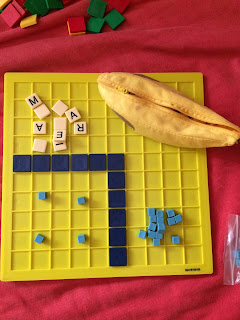 She played the centimeter cubes (which substitute for black stones) and I played the Bananagram tiles (substituting for white stones). I gave her a four stone advantage and we played three games with me starting in different places (center, corner, side) and saw that she could easily capture at least one of my stones without trouble.

Some of J3's observations along the way:

For the second lesson, we made the board a little differently based on J3's preference for a blue-green-yellow-red pattern around the border: 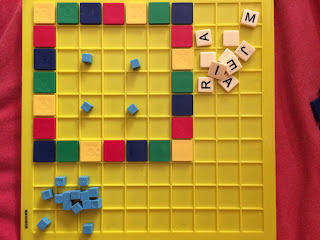 This time, J3 made some different observations:


For the third session, J3 was willing to reduce her starting advantage and she wanted to place the handicap stones herself: 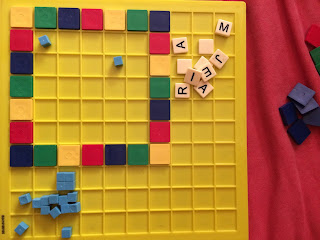 This is a losing position (remember, we are still playing where the first to capture at least one stone is the winner): 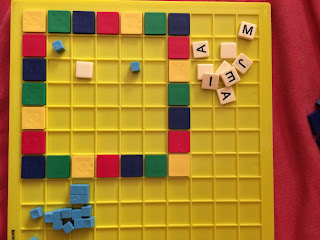 She didn't take losing especially well, but this is a nice feature of playing these kinds of short games. The kids can make a mistake, they have to deal with failure, but it isn't very costly since each game only takes a couple minutes and the next game starts right away.

From a Go/games perspective, I think it is helps to start playing a lot of low-cost games: fast games where the winning condition is easy to identify and immediate. This allows the kids to make mistakes, see clearly the consequences of those mistakes, and lose, then immediately try again.

From a math perspective, there is a huge amount of elementary math that comes out of the simple games:
In addition, we had the usual experience with using physical manipulatives: something extra always comes up. For example, using the 100 board inspired J3 to show off to me that she can count to 100 now (using the board as a reference).