So, what do you see here? 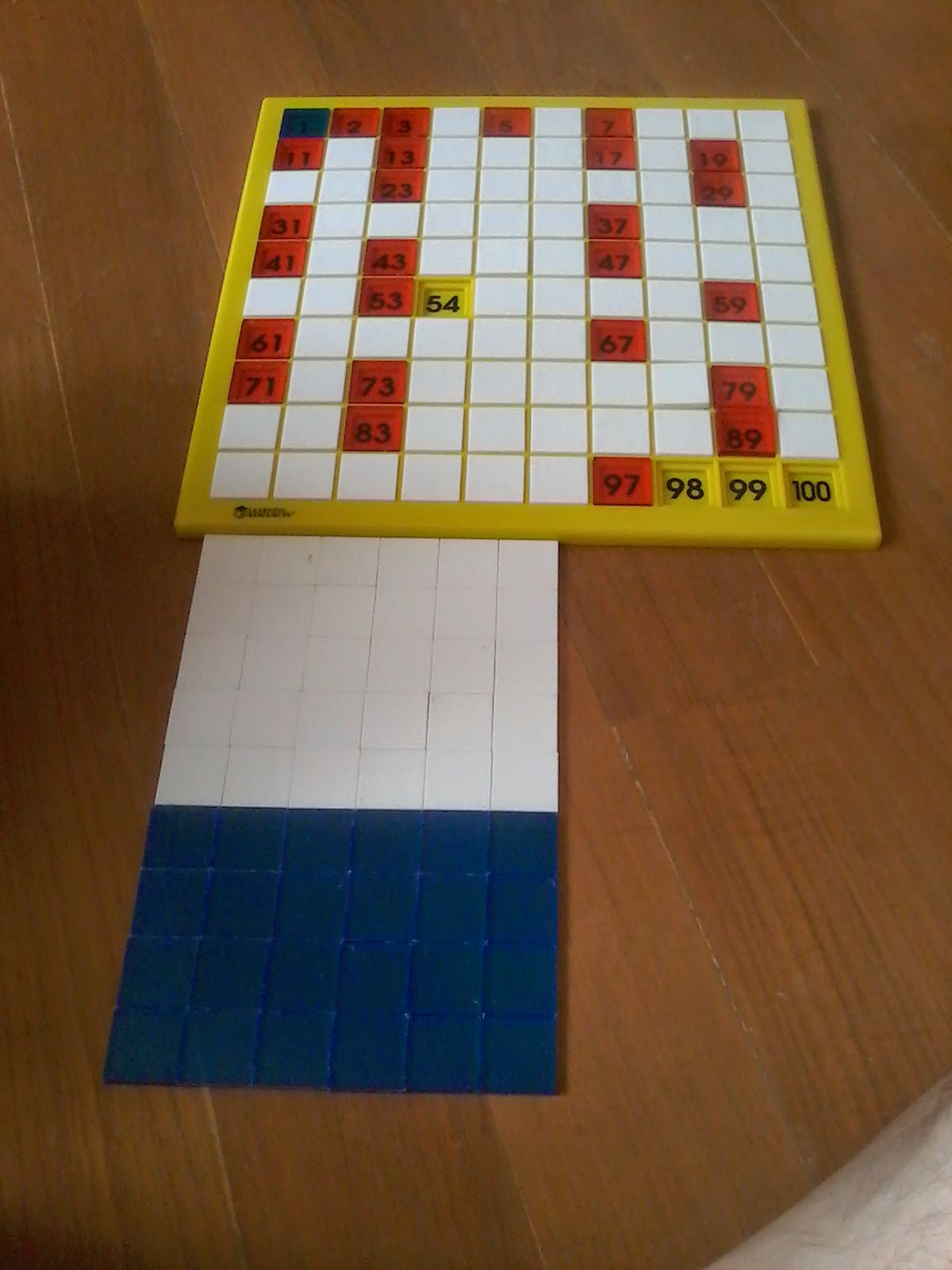 While watching the kids play on Sunday, I amused myself by applying the Sieve of Eratosthenes to our 100 board: blue for 1 (which I'll come to later), red for primes, white tiles for composites.  As always happens, a non-empty subset of the kids got interested and asked what I was doing.  I explained a bit ("I'm marking out the multiples of 2, you know, skip counting by two" and "now I've moved on to 3" then "I don't have to do 4, do you know why?" etc).  At the end, I explained we had a special pattern: for any number covered by a white tile, we could take that many small squares and make it into a rectangle that wasn't a stick, a straight line, a 1xn rectangle.  Yes, I did give them all of those terms . . .

So, let's try an example . . . so Jate picked 54 (maybe with some guidance?) My mind raced, which factorization should I show him: 2x27, 3x 18, 6x9? I chose 6x9 because each dimension is small enough that he could easily see how many squares were on that side and it is aesthetically pleasing.

Other factorizations
When you've got a beautiful number like 54 to work with, stopping at one factorizatioin is criminal, even if it is as great as 6x9.  We spent some time rearranging the tiles to make 3x18 and 2x27 (not pictured). I asked if we could make any other shapes and was given a dismissive: "of course, we could just make one 54 squares long, daddy!"

What about 1?
We discussed other numbers and eventually got to 9.  It was deemed a good one because it was a square and then Jate highlighted the smaller 2x2 square inside, so 4 was cool, too. I asked if he could make any "interesting" rectangles with 7, 5, 3, and 2 squares, so we spent some time investigating those.  Didn't quite manage a proof that they are prime, but I think we got some intuition going.

When you are down to 2, then 1 comes next.  We had a good discussion about whether 1 should be in white because it was a square, in red because it could only be made into a 1xn rectangle, or whether it was something else. This led to a compromise (not pictured): we put a white tile under the blue one to show that it could be an interesting rectangle, but mostly it was still blue.
Posted by JGR314 at 8:47 AM