On weekdays, there isn't enough time to plan a full set of activities.  However, it is still helpful to have a couple of quick games or exercises ready to go.  In some cases, we might find ourselves with surprising free time or, more likely, have a need for some activity to occupy one of them before trouble starts.  Tonight was a bit of the latter.

Jate's Game
We played a couple rounds of another game I got off NRICH.  Here is the link: http://nrich.maths.org/6589.  The basic rules:

It might help to study the picture below.  It isn't especially clear or tidy, but you should be able to get the point:
Jate is working with 17 (on the right of the paper, circled and not yet crossed out)
He has to choose another number. Since so few options remain, he has two choices, either of which causes him to win the game.  See if you can figure out his move. . . 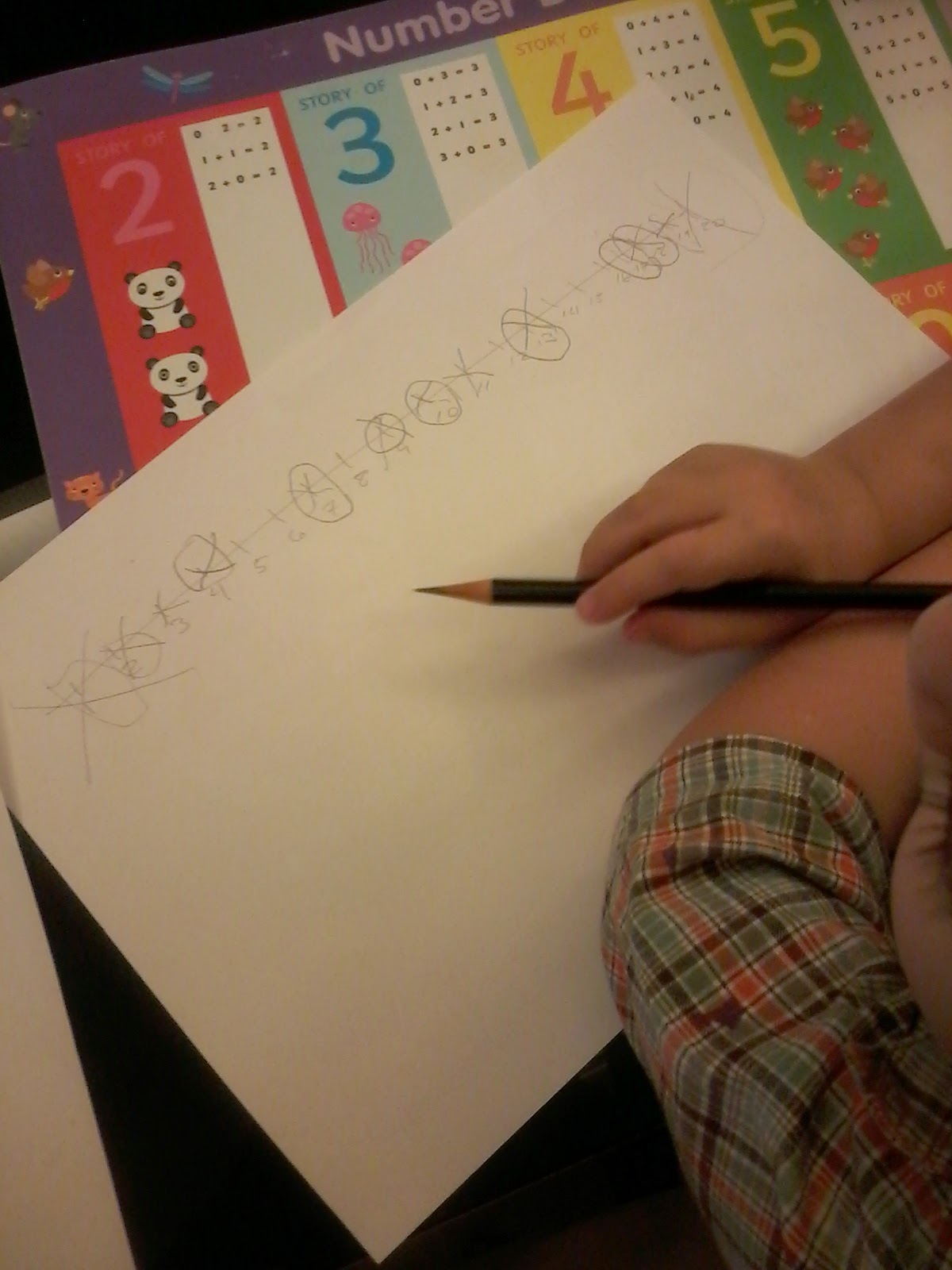 Now, this hasn't come up yet, but I have seen the opportunity to argue about a special case: what if he had chosen 5 and circled 12 (= 17-5), crossed out the 17 and 5?  Could I have chosen 6 and circled it, because 12-6 = 6?  Seems to me that you have four options for rules to deal with this situation:
In our case, Jate avoided this ambiguity (did he do it intentionally?)  As always, I invite you to explore each variant.

We played 1 and a half games.  The second game, it turned out Jate had set a booby-trap on one of the numbers, so I automatically lost when I circled that number.  How do I know it was pre-planned and not an arbitrary, last minute rule change?  Because he told Jin and they both started laughing as soon as I circled the trick number.

Jin's Game
Writing up the notes on the tidy-up game (see here) reminded me that I hadn't ever fully explored toetactic (inverse tictactoe.)  Jin was amenable to playing, so we drew a couple of boards and played tictactoe as a warm-up.  Then, I explained we were trying to force the other person to get 3 in a row and we played a couple of boards that way. No deep analysis tonight, but it was fun hearing him say "inverse tic-tac-toe" and seeing the plans go through his mind as he worked out his strategy.
Posted by JGR314 at 8:45 AM