For now, this is a bit of a laundry list, without any special structure.  If there is a theme, perhaps the main idea of the weekend was "games."

Over lunch on Saturday, we played a kind of improv game using sight word cards, these: 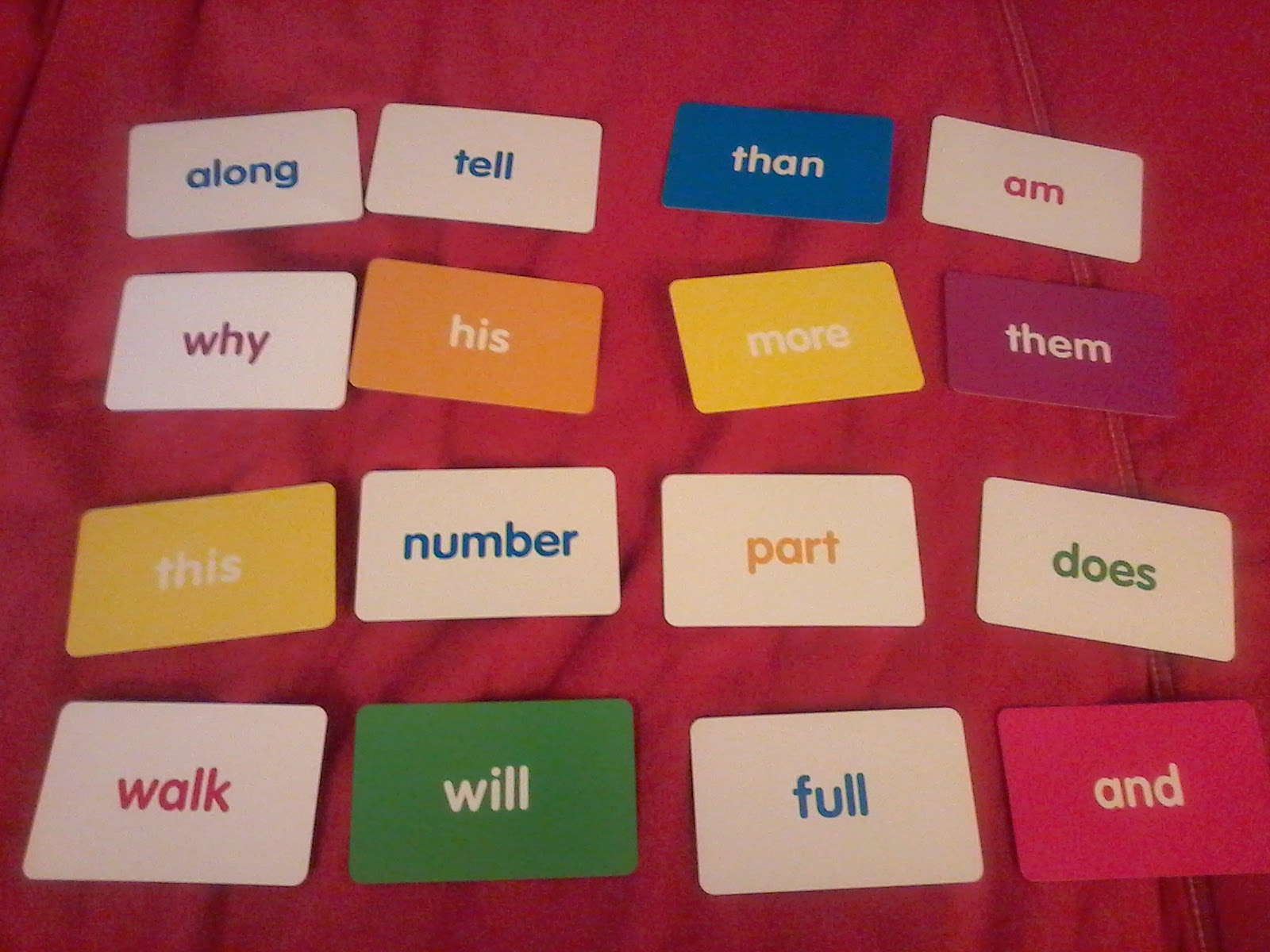 In our pack (from FlashKids) there are 86 cards with a word on each side.  I guess the theory of sight words is that these are common words a fluent reader should recognize on sight and read without sounding them out.  We played a game where I would draw two cards and we would each take turns using those words in a sentence, flip the cards, repeat, then draw new ones.

We went through perhaps 10 rounds of cards (about 40 words, roughly 1/4 of the deck) in 10-15 minutes. The boys had no trouble with the words, so as a reading exercise this might be a bit too easy now, but they both were in the mood for this game and had a lot of fun.  Pretty quickly, some themes emerged: Jin used his sentences to tell a story about the Boobaloo characters, while Jate turned all of his sentences into something about bottoms and poop.

We didn't really get up to much writing this weekend, but had some long reading sessions at bedtime.  Jin has started reading to Jane at bedtime, though this weekend his rendition of Spot's Treasure Hunt was a bit grudging and soon gave way to a simple race through lifting the flaps.  Jate read us a Thomas story on his own, Jin read a couple of pages of Asterix, and I filled in with Alexander and the Terrible, Horrible, No Good, Very Bad Day and some sections from one of their children's encyclopedias. Strangely, the Alexander story needed to be jazzed up with some emotive reading (I'm great at imitating a petulant and whiny child, wonder why?) but they enjoy the encyclopedia entries straight. 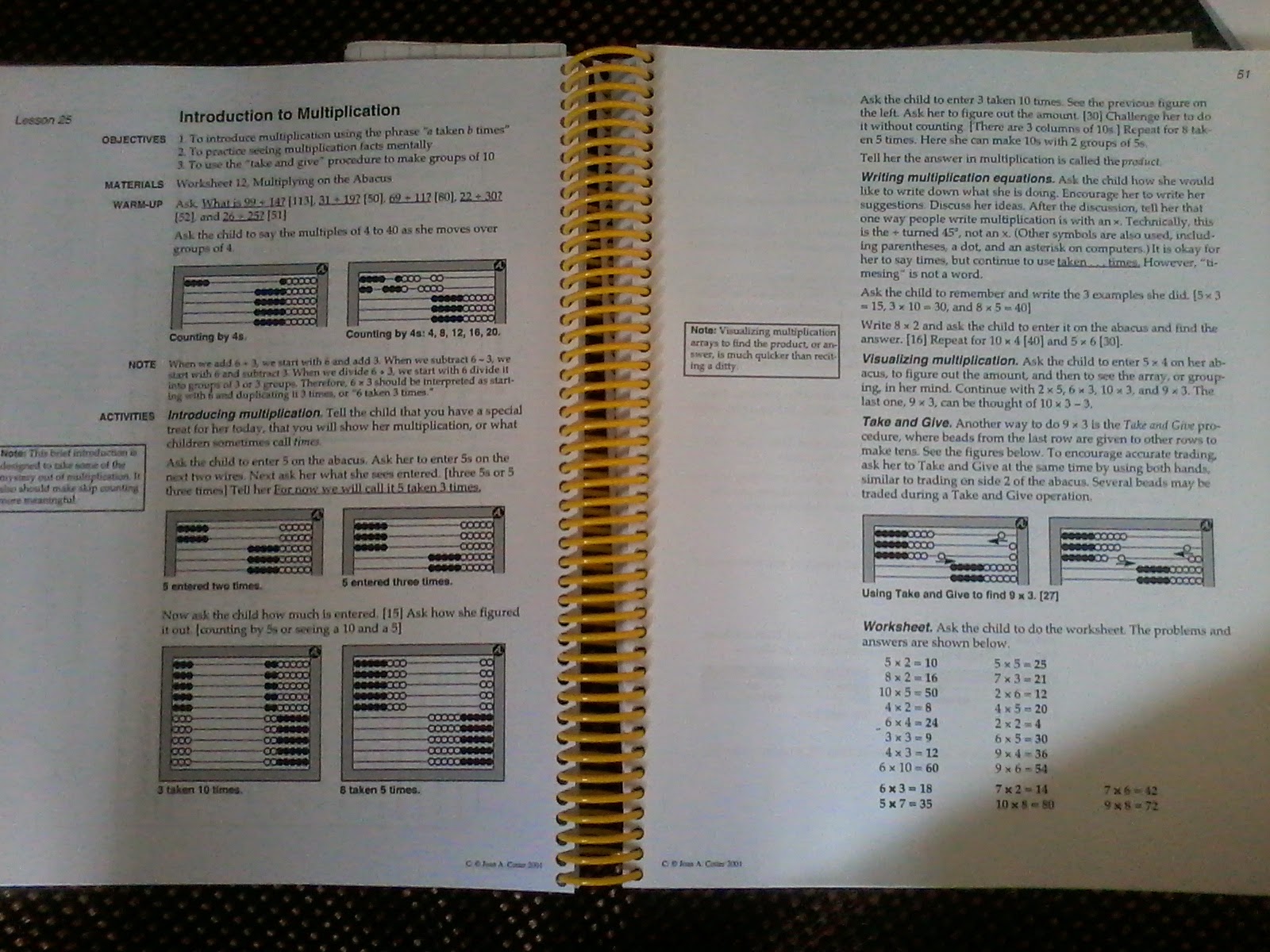 These are convenient books because they lay out lessons that we can essentially just open and go through with the kids.  If something doesn't seem fun or is too easy, we either skip to the next activity or let them go through it very quickly. If she has time, Mommy will fill in the details of what she did for those sessions.

I think the abacus figured in, or at least it was something with which Jane starting playing, so here's a quick snap. 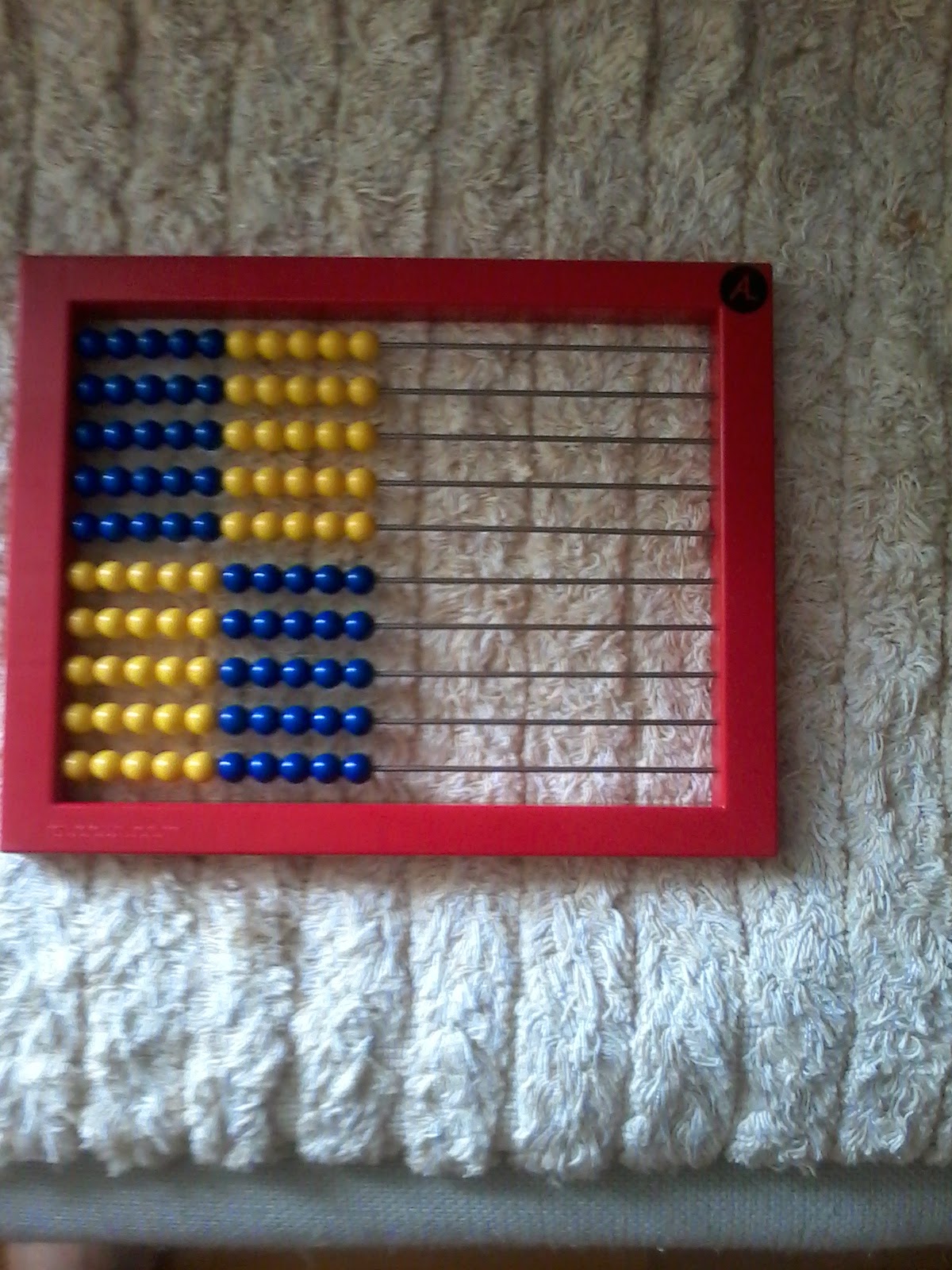 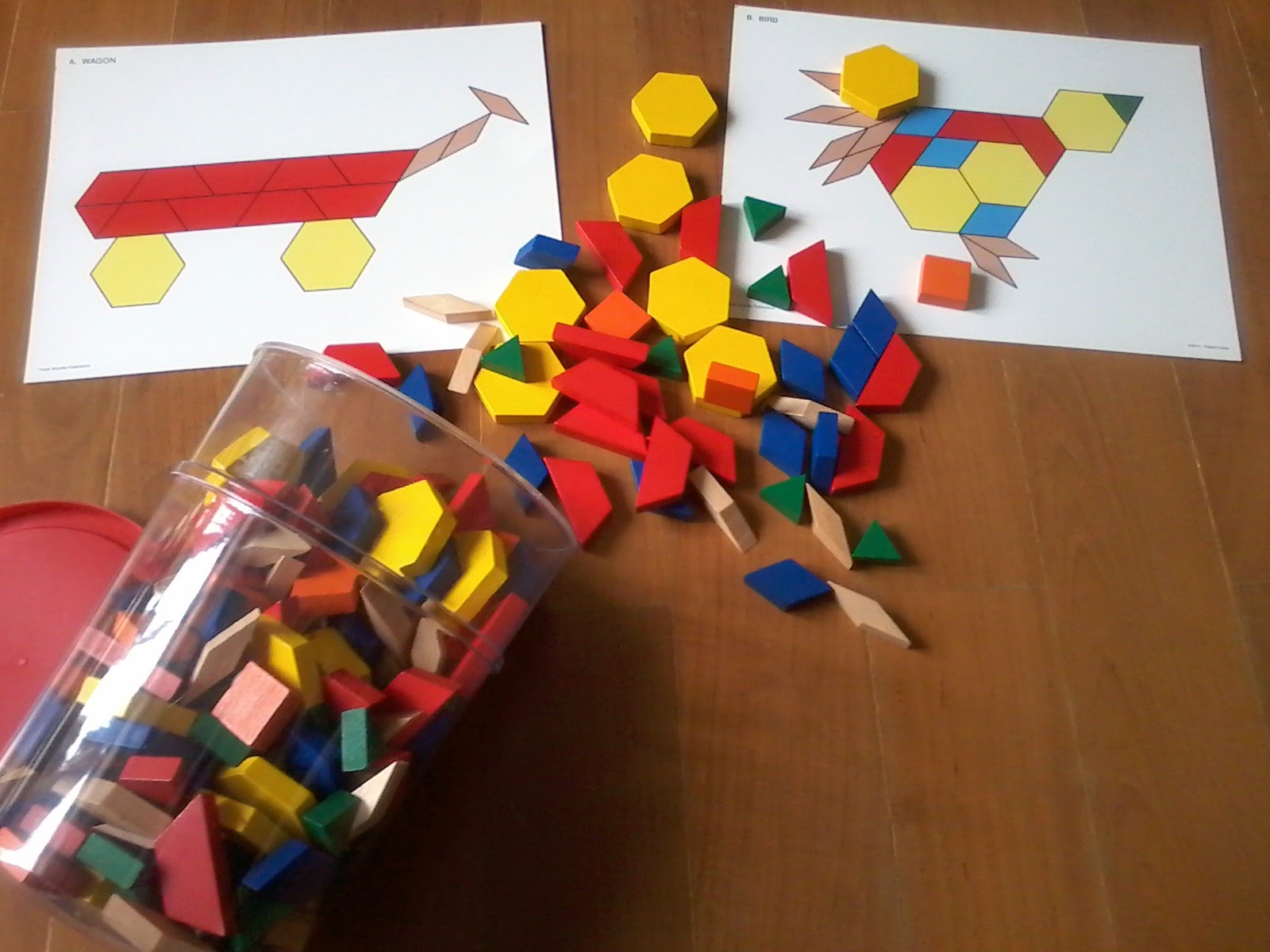 The pictures don't really stay the centerpiece of the activity, mostly we spend our time stacking the blocks, tesselating, comparing the blocks, making our own pictures, etc. You know: playing and investigating.

We played two other games over the weekend, both using a nice chinese checker set given to us as a leaving gift by some friends: 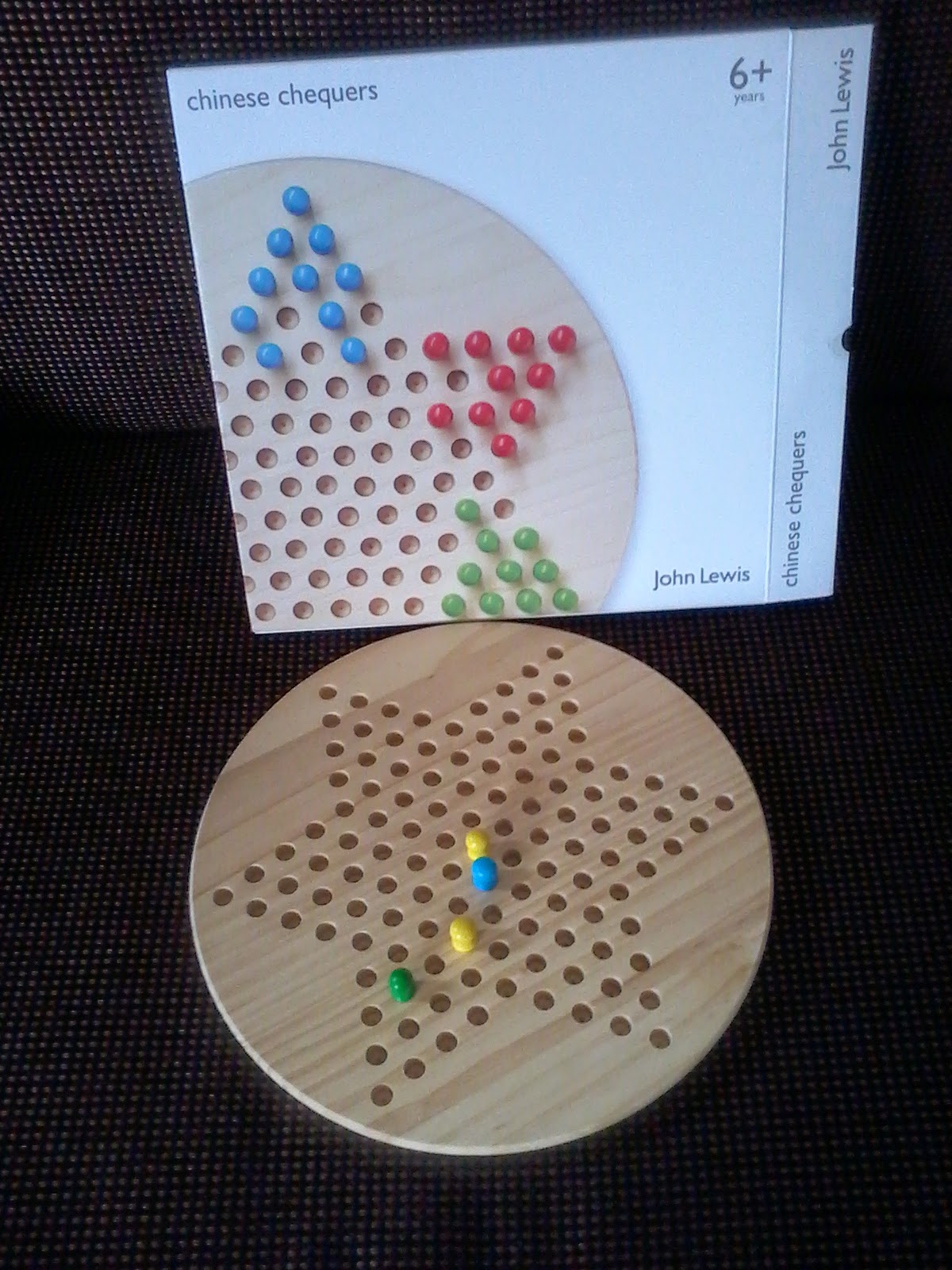 As a kid, I don't think I ever got the point of chinese checkers. To spill the secret, it it what you can see in the picture: yellow is about to make a big advance by jumping over the blue, over the next yellow, and over the green to move forward 6 spaces. Jin seemed to get the point quickly and seems about 50/50 playing against either Mommy or Daddy.

Tidy up game
With the chinese checker set, tidy-up time also turns into a math game, one of you told us about this as a response to reading an earlier blog post: alternating turns, each player puts 1, 2, or 3 pieces in the box.  The winner is the player that puts the last piece in the box. With a little prompting, the kids can figure out the strategy. Here's how I prompted Jin:
There are a bunch of extensions of this game. One that Jin suggested was instead of having a simple winner, maybe we should keep track of how many pieces each person collected and that would give them points. We discussed this a bit and then he realized that, alone, wouldn't be a fun game because everyone would just take 3 each turn. I said we could give the person who takes the last piece a bonus, but we didn't really have time to explore that, but here's where you could take it right away:
If I get around to it, I might make a pencilcode version of some of these.  I have a basic AI from  my work on Traffic Lights . . . which I still haven't gotten around to telling you about.

Theoretical digression
Multiplication happens to be a topic I've been puzzling over for a while.  There is a well-established debate about the pros and cons of teaching multiplication as repeated addition, scaling, or something else. Here is part of the internet branch of this debate, a great post from Keith Devlin.

I don't know if we are going to get it right, but my approach so far has been to try to present a range of different incarnations for each of the operations. Here is a nice poster that claims to have 12 models for multiplication (I wish we had a copy of that poster!)

Even for addition, though, there isn't one single mathsematic concept that applies.  For example, adding 2 apples to an existing pile of 3 apples gives you an ending pile of 5 apples, sure.  But traveling 2 km and then going another 3 km is a bit different.  Different again is modular arithmetic (or clock addition, for the under-7s).