Who: J3 (2 year old)
When: late morning, after J1 and J2 had gone to school
What did we use: water, yeast, flour, sugar, salt, oil, measuring cup, measuring spoon, scale, bread machine
Where: kitchen

See how little of the finished product was left before I remembered to take a picture: 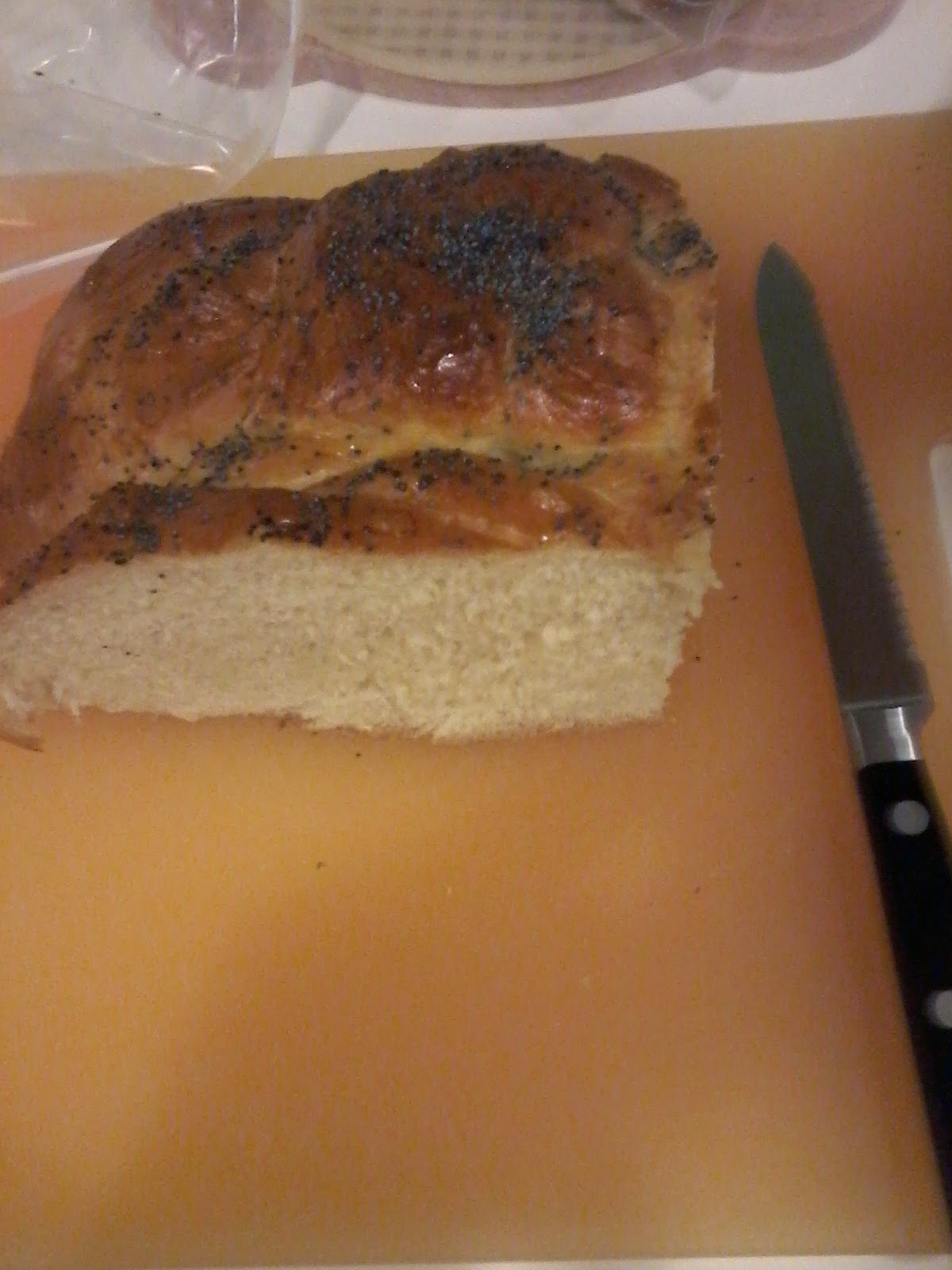 I'd posted before (here!) about some of the (mathematical) reasons to bake with kids.  Here is the math we did today while making bread:

Counting
Maybe I go overboard, but my habit is to count everything around the smaller children.  Based on the recipe alone, there wasn't much scope for counting (2 eggs, 2 tsp salt, 2 tsp yeast) but we also counted the number of measuring spoons in our set and how many scoops of flour we needed to get our target mass. Along the way, we probably counted fingers and maybe even toes, too.

Measuring volume and mass
This is the obvious place to develop number sense while cooking.  We end up doing a lot of extra measuring during the process, playing with the different tools, and talking about comparisons between them.  For example, flour (21 ounces, about 600 grams) was the only thing we needed to weigh. What we actually weighed: flour for the bread, flour not used for the bread, the mixing bowl, the measuring cups (full and empty), a water bottle and box of crackers near us on the counter, the measuring spoons, and the sugar jar.
That allowed us to explore a range of weights from about 20 grams up to 1.5 kg.

We talked about metric and imperial units and looked at all the quantities in each. In particular, I use the imperial units as a good place to talk about fractions.  For today, I just read out the fractions close to what J3 measured, and included those in our chatter about comparisons.  My goal is to head off any (distant) future anxiety that comes from seeing fractions as a different "type" of number.

Estimating
I try to encourage them to estimate measures before they see the result.  This is easiest for mass, I just say "I think that will be 100 grams (or whatever I guess)" before they put the object on the scale. For the older kids, they will almost always respond "I think it will be less/more/[x grams]." J3 will usually just copy me, but she makes a delightful sound when we read the measurement together and comment on how close our estimate was.

Next steps
In truth, I didn't really go through every step with J3.  We measured the ingredients into a bread machine pan and then let the machine do the mixing and kneading.  Of course that saves a lot of time and effort, but we didn't see the exciting phase transitions where the dough goes from  separate liquid+dry flour to lumpy/sticky to smooth/elastic.  For older kids, it is interesting to ask them why they think the dough changes. Also, I did the shaping myself and that could be an opening to talk about braids/twists/knots.

As I wrote up these notes, however, I realized that I missed an opportunity with J3 to talk about temperature and time.  I think time was the big one: time for mixing/kneading the dough, time for a rise (actually there are 3 rises in this recipe) and time to bake.  With that in mind, I'll leave you with a picture of our kid-friendly timer: 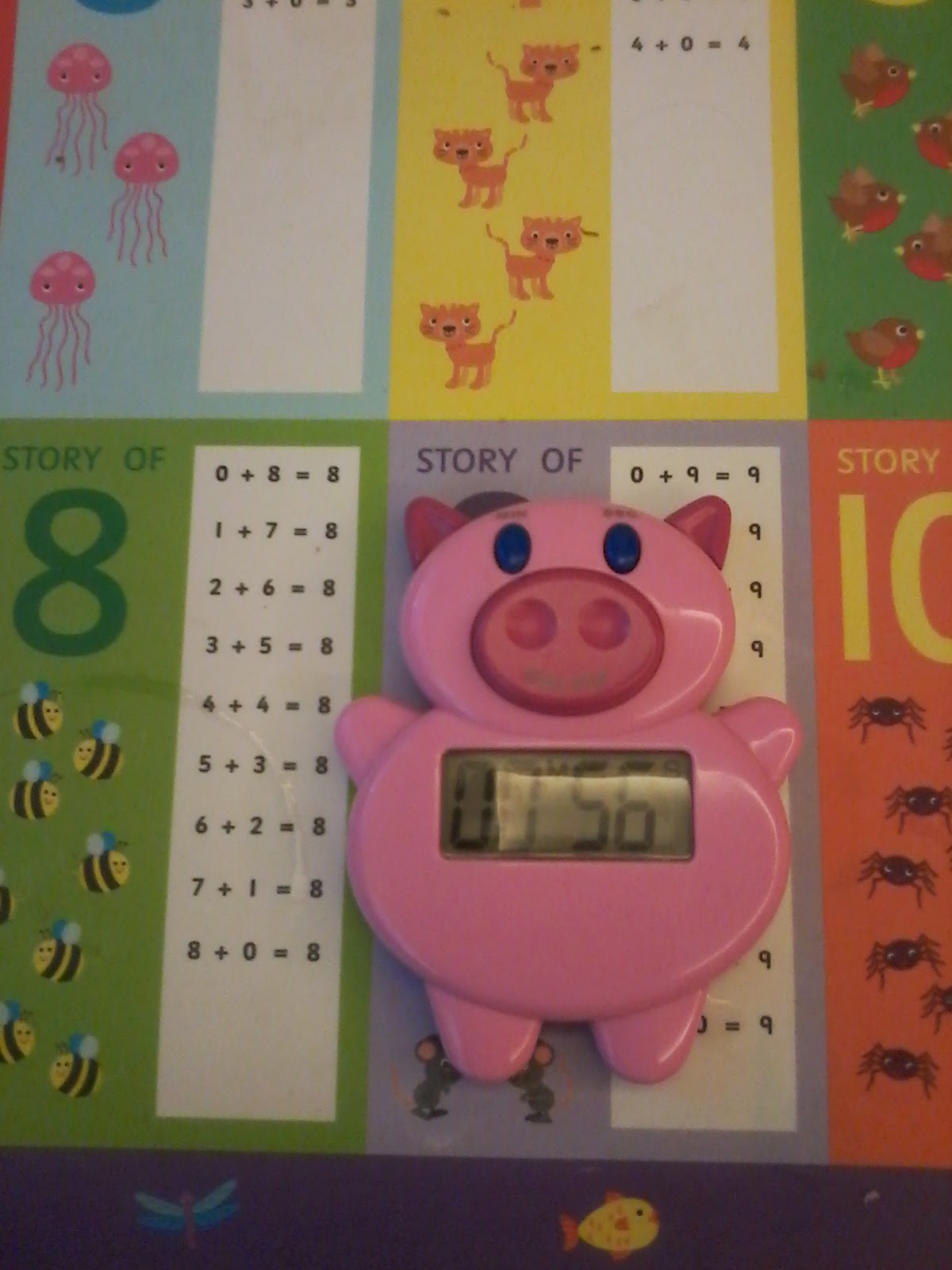