Who: J1 and P
When: after bath, before bedtime
Where: In J1 and J2's bedroom
What: doing roman numeral calculations on the mini-white board
Why: hmm? Some ideas below
How: facilitated by J0 folding ninja stars to appease the restless on-lookers

Roman Numerals
In our RightStart math book, we got to a series of activities relating to roman numerals.  Mainly this consisted of translating back and forth between arabic numerals and roman numerals, along with debating the actual rules for roman numerals.  I will have to get P to write about how she introduced the topic. When I joined the conversation, J1 was in the process of writing out the natural numbers up to 40 (XXXX or XL?) in roman numeral form. Later, he went up to L (50), but he already knew the symbols for 100 (C), 500 (D) and 1000 (M). Next activity was converting from roman numerals back to arabic (for example: 377 = CCCLXXVII) and then he did a round of conversion back.

All of that is pretty straightforward . . . and probably not very interesting. So far, what he's getting is some practice calculating simple addition in his head, added flexibility of thinking of numbers using different representative symbols, and a familiarity with a number representation system that is justifiably extinct.

For example, Who used this numbering system? Who uses it now? What other systems were used around the same time? When and why did it get replaced? Are the rules clear, how can you cheat, how can  you make the number expression as efficient as possible (within the basic spirit)? How does it compare to the arabic numbering system?

All of these are fun topics for exploration.  Let me expand on two that we discussed.

Comparison
"How do roman numerals compare with Arabic ones (or the Thai system)?"
"What's the same?"
"What is missing in one that exists in the other?"
"What are the advantages/disadvantages of each?"
"When would you want to use this one? that one?"

All generic questions that can be asked, in some form, about anything new you experience/see/learn and making a comparison like this is probably the most important habit in truly understanding the new idea.

I'm sure you can come up with a lot of similarities and differences. In case you didn't get them, though, here are two cool features that the roman numeral system lacks:

Cheating (aka are the rules clear?)
More ingrained than comparison, our 7 year old J1 has the habit that when he hears a list of rules, he immediately starts thinking of how to break them, alternatives, or cases that haven't clearly been covered. This was how he made the numerals up to 50 more fun:

Throwing stars
Of course younger siblings J2 and J3 were enthralled by this discussion.  The alternative activity tonight was folding stars. If you don't know how to fold a paper star, these two videos will get you going: Ninja Star and Puffy Pentagon Stars. 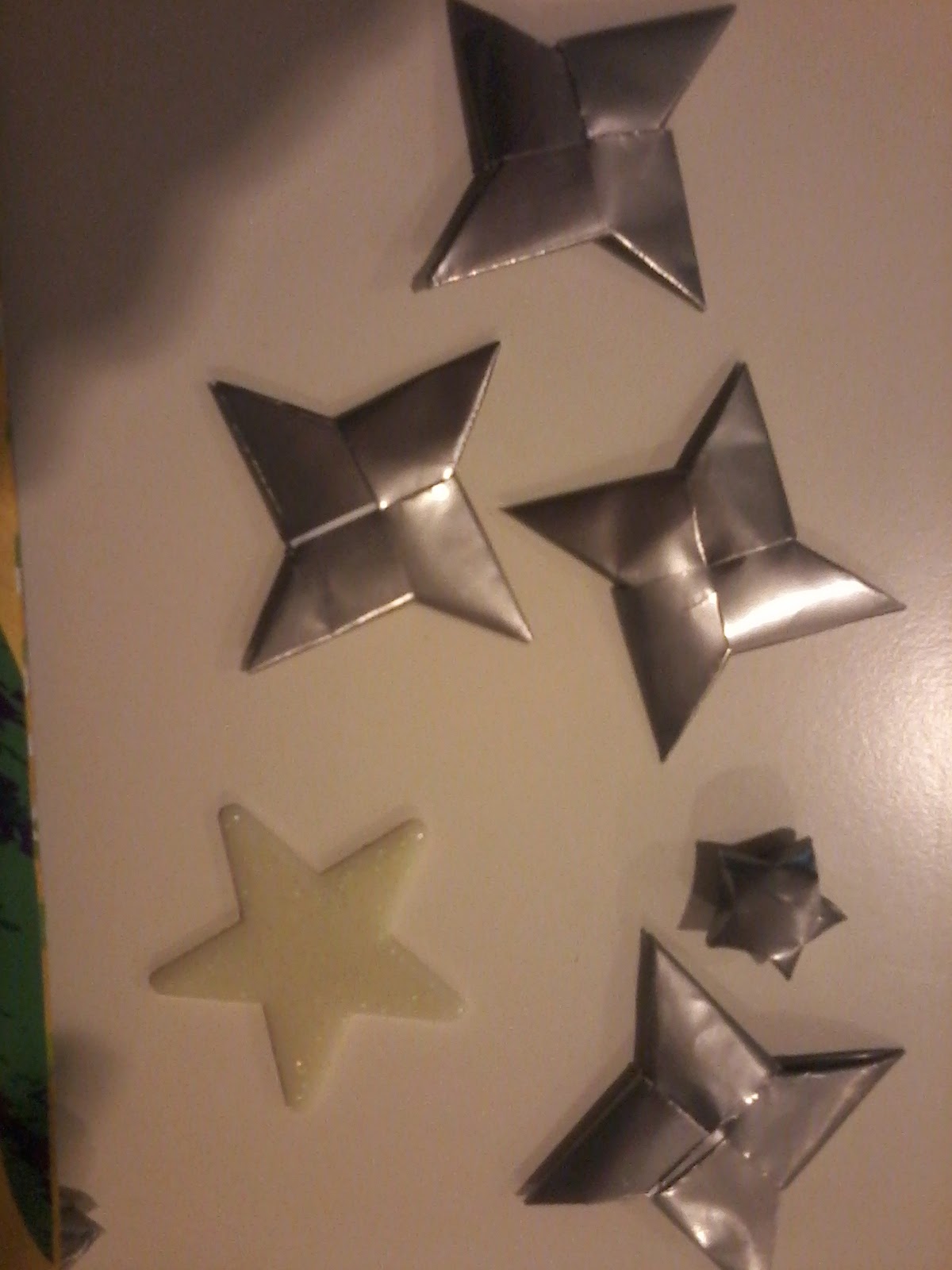 Cute little projects.  My recommendations for when you do these with very small children:
(1) have a bunch of extra material
(2) expect a lot of mistakes and destroyed products
(3) have everyone try to make something
(4) give them plenty of opportunity to examine what you've done
(5) ask questions, get them to talk about what they see and what they are doing. Use the comparison questions above!