Apologies, this post is a bit of a grab-bag of different things we have been doing recently. They are a mix of activities across each of the age groups, done at different times of the day and different levels of engagement, though most of the one-on-one time with J1 comes just before bedtime.

Number Sense: J3
We have made a conscious effort to surround the children with numbers and are often looking for good ways to present concepts in a different format, especially one that has physical objects and some relationship to their body.  Meals are often rich with opportunity, especially if you don't mind a little bit of playing with the food.  Here, J3 has matched up 10 almonds with each of her fingers, counting as we made the layout , then counting again as the almonds got put in a little cup, then counting again as she ate them. 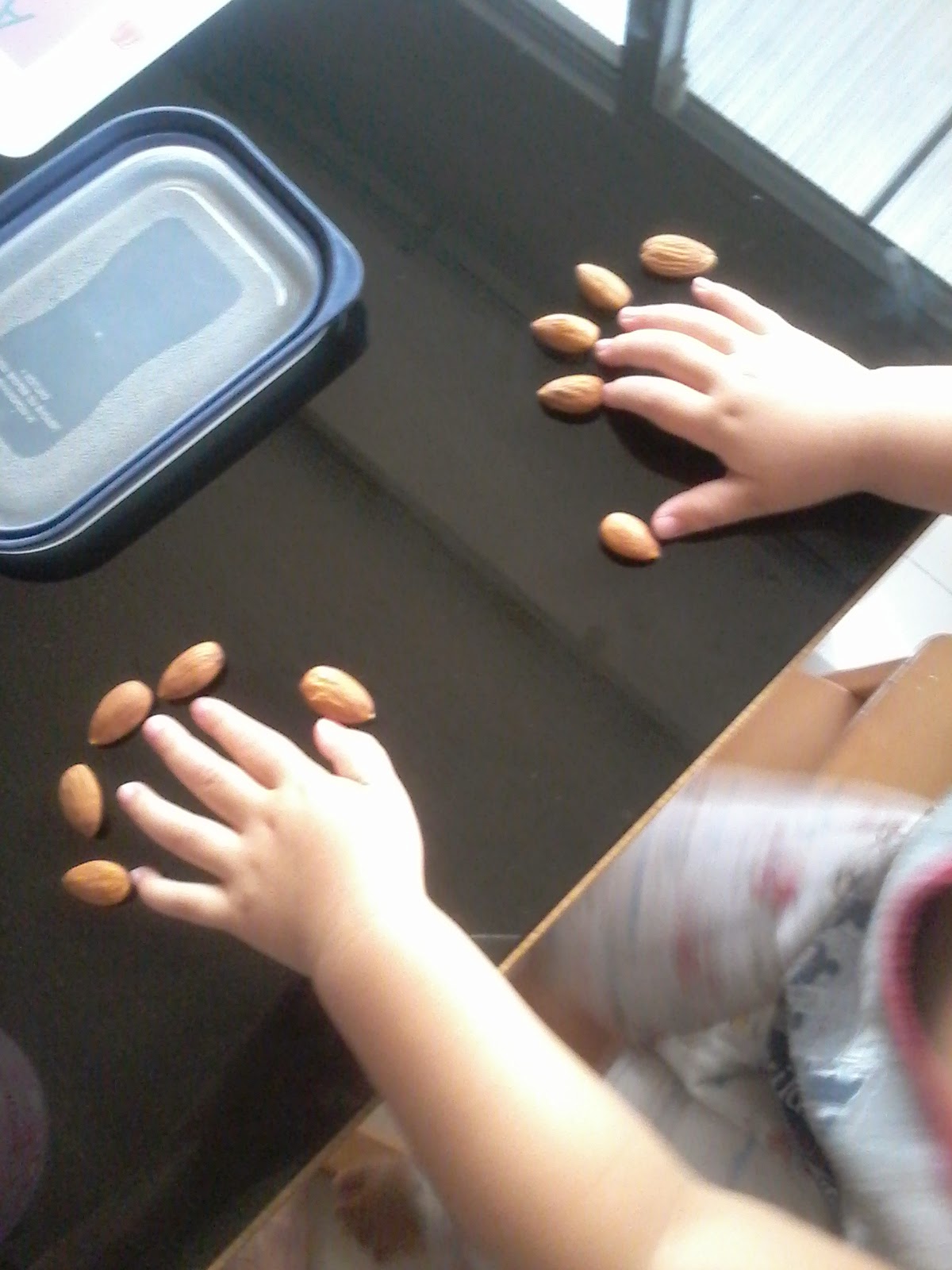 
Snakes and Ladders, err, Dinosaurs and Dinosaurs
I've mentioned before and will repeat frequently that I enjoy playing games, but snakes-and-ladders format aren't really games since you can't actually do anything. For now, though, the kids like them and the provide an opportunity for two things: (1) asking interesting questions about structure and (2) introduction to probability.  Along the way, there is practice calculating, but this is just small addition problems and not especially rich. 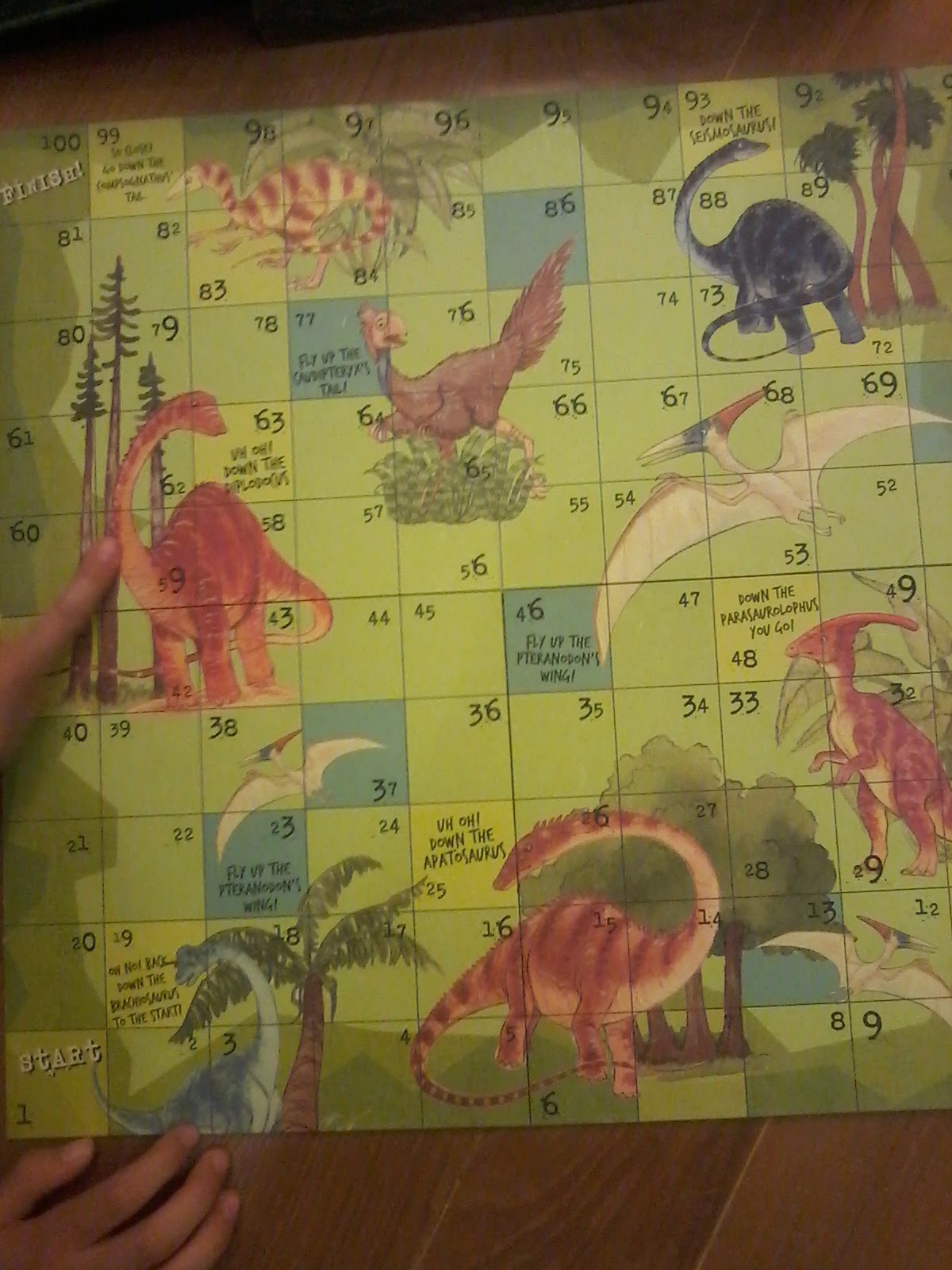 We made one big modification to the game: playing with two dice instead of one.

The main point of interest is hearing J1 calculate dice sums, which square he is jumping to, and analyzing the size of the boost (or drop) from hitting the bonus squares and the penalty squares. It fun to talk about the probabilities of hitting the bonus and penalty squares, particularly because he asked all the questions and did most of the talking.

Simple starter cues, if you want them:
Toys

Really, all of this post is just leading up to praise for some toys the kids really like and that can soothe parental anxiety about "stimulating development."  Frankly, I don't really care, since I enjoy playing with these, too!

Rainbow Loom
Extremely popular in J1's school group and even J2 can weave a nice design on his own. 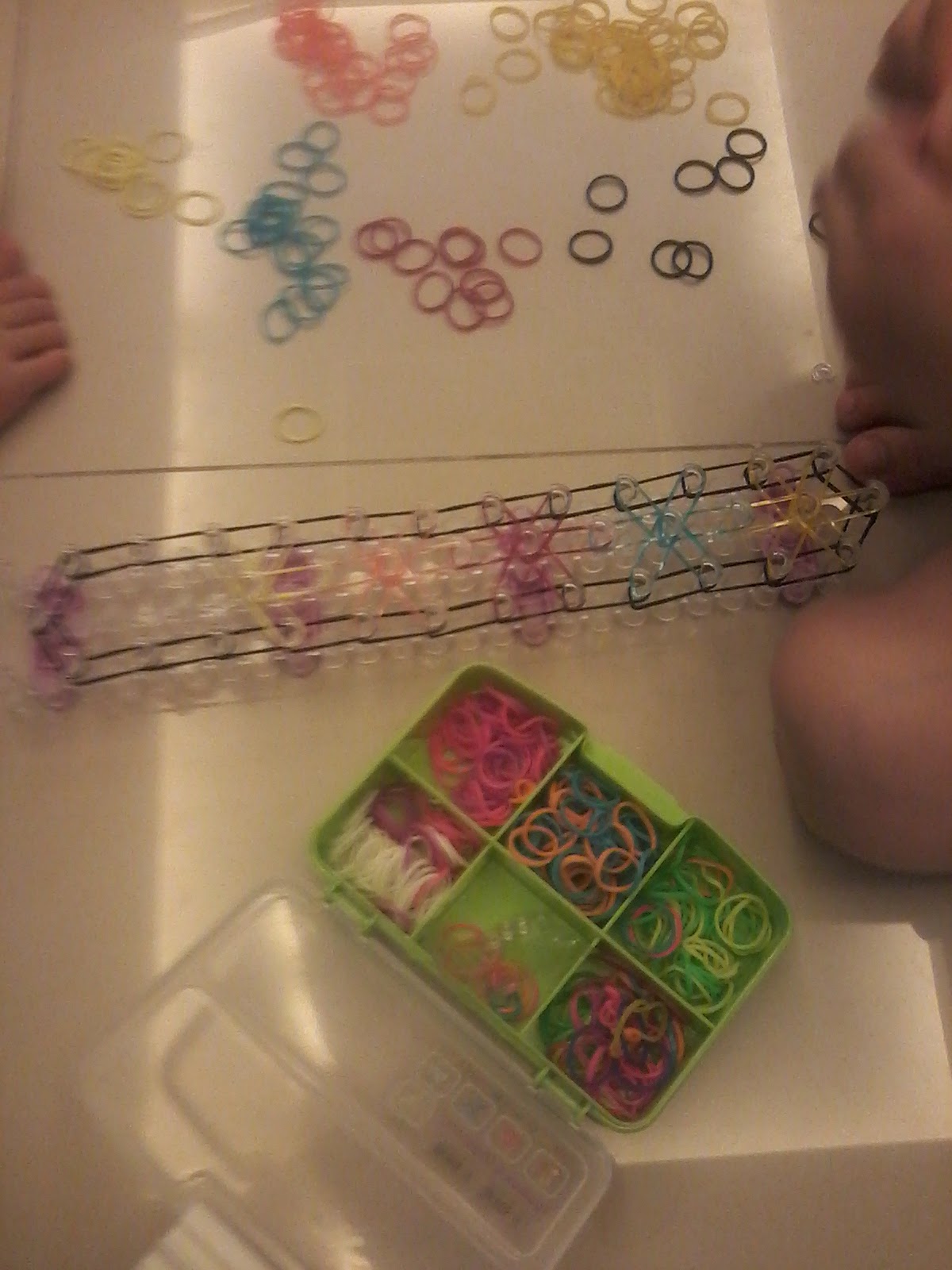 They also discovered that youtube has useful how-to videos and they even worked together! 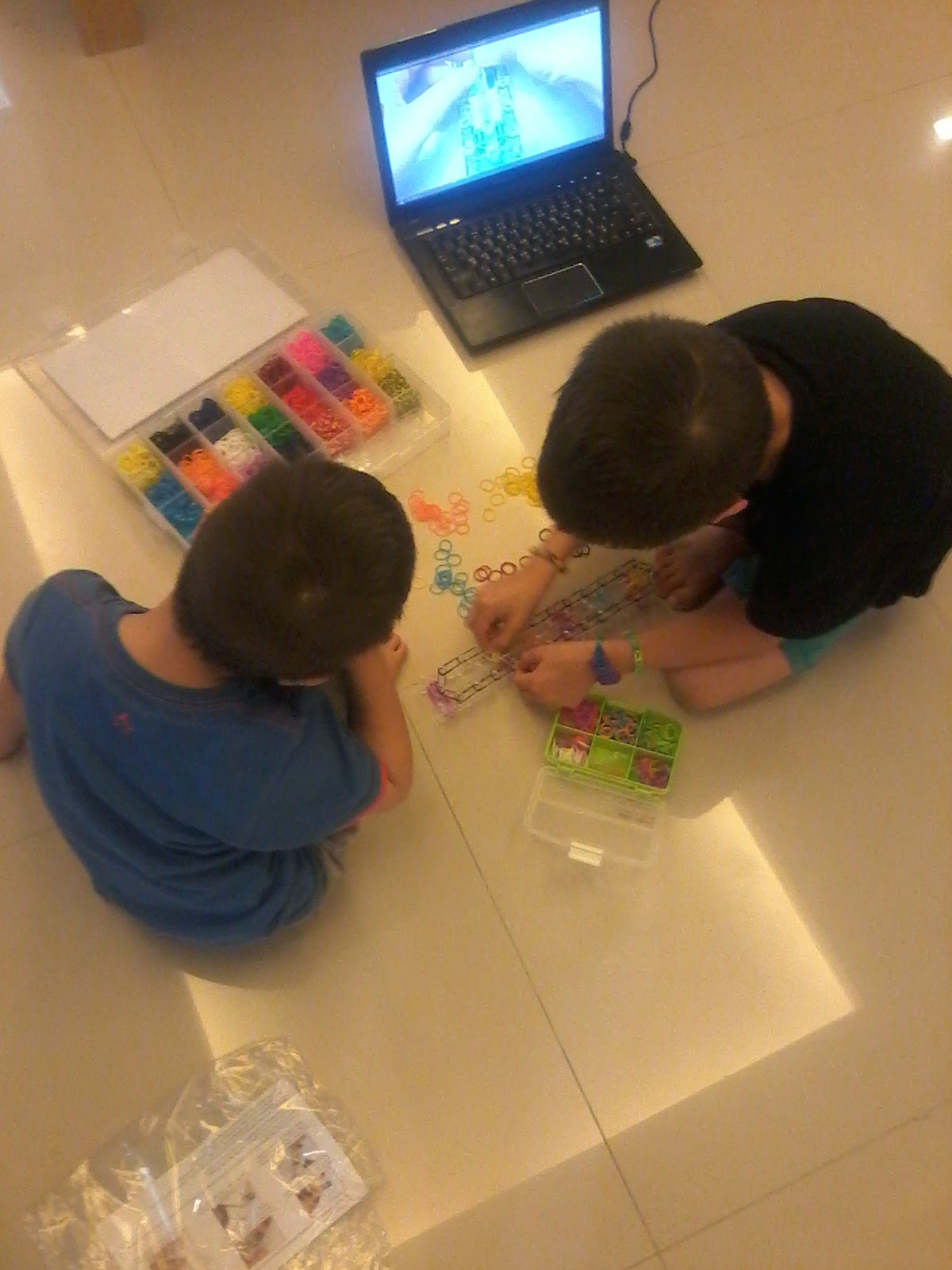 So, what are the (future) mathematical benefits:
- pattern building and recognition
- building a mental model of how the structure fits together
- understanding algorithms (especially with repeated loops) 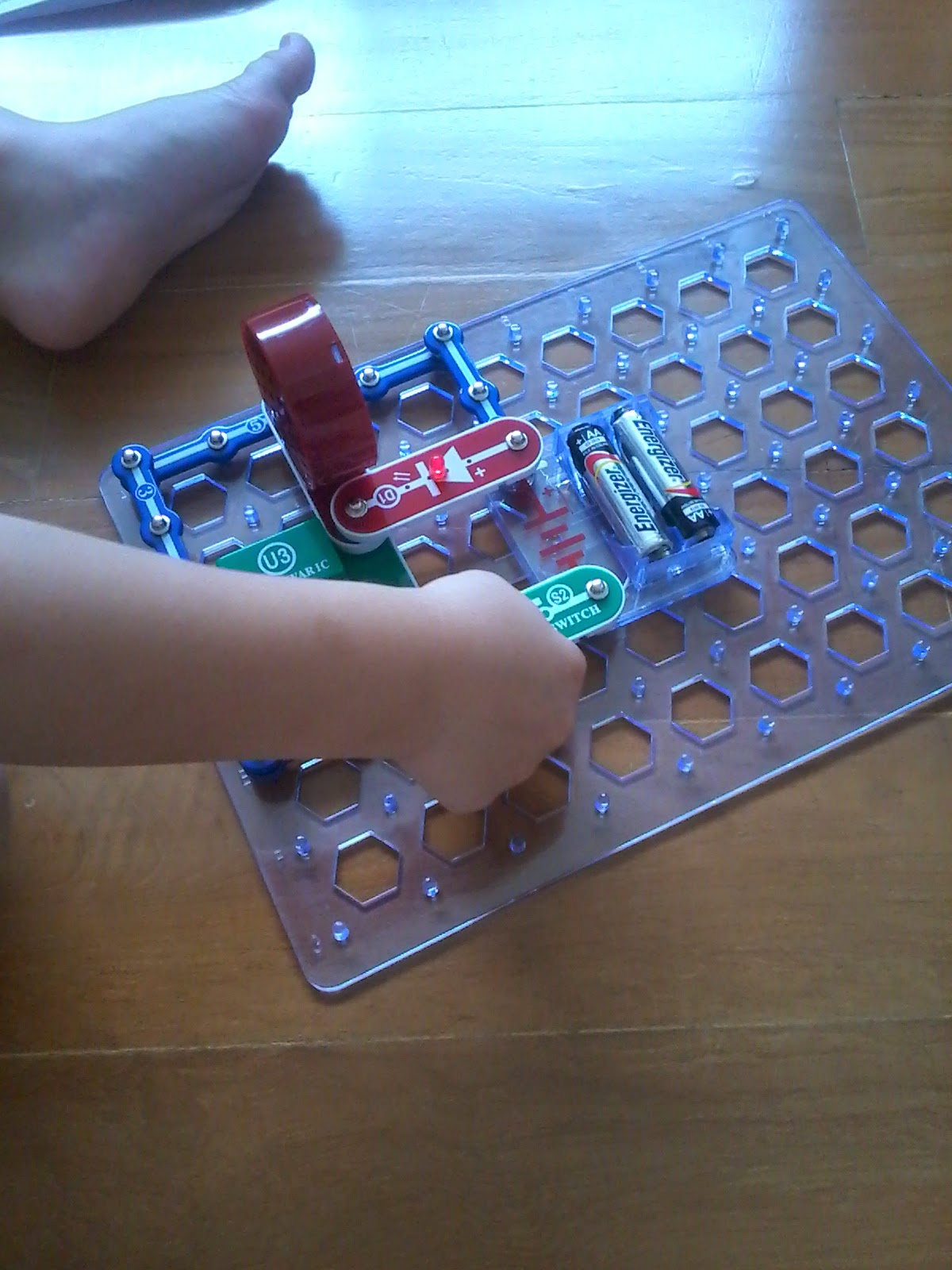 A fantastic kit with electronic components that all snap into a grid-circuit board for easy assemble and disassembly. 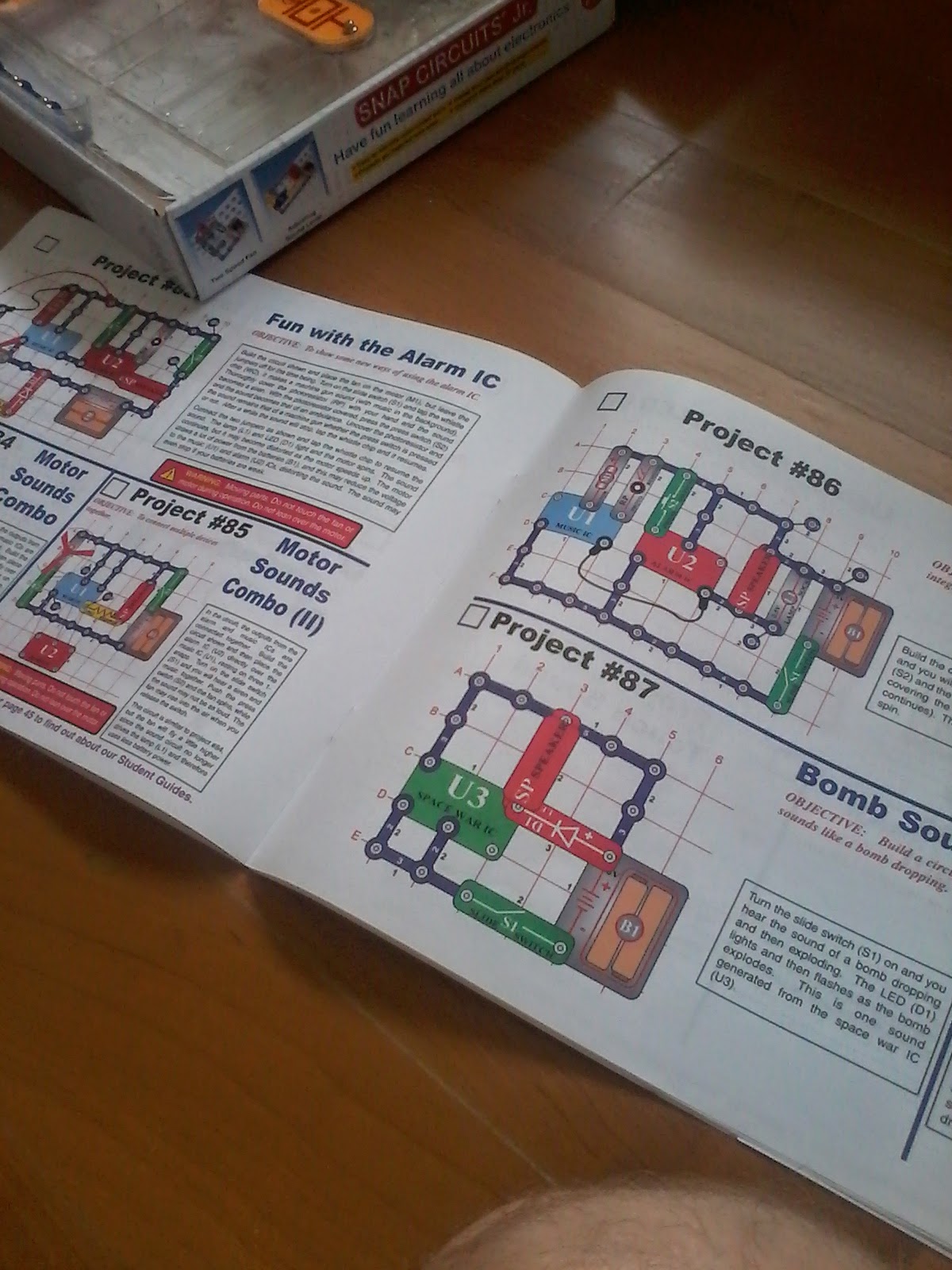 There is a book of projects which show circuit layouts and give some commentary about what you should be examining to understand the operation of the circuit.  Usually, they introduce each new component in a show piece of its own so the kids can build a sense of function.

I do have one complaint about the kits, though: a lot of the projects depend on using an integrated circuit.  These are black-boxes, so it misses a bit of the fun of building everything up from truly elementary components.  For now, that's certainly fine for our kids level of sophistication since it is fast to build a fully functional circuit. We do miss out on really understanding what is going on inside the box, though.

Trains
Really just an excuse to post a picture that reminds me how much fun J3 had playing with one of our toy train sets: 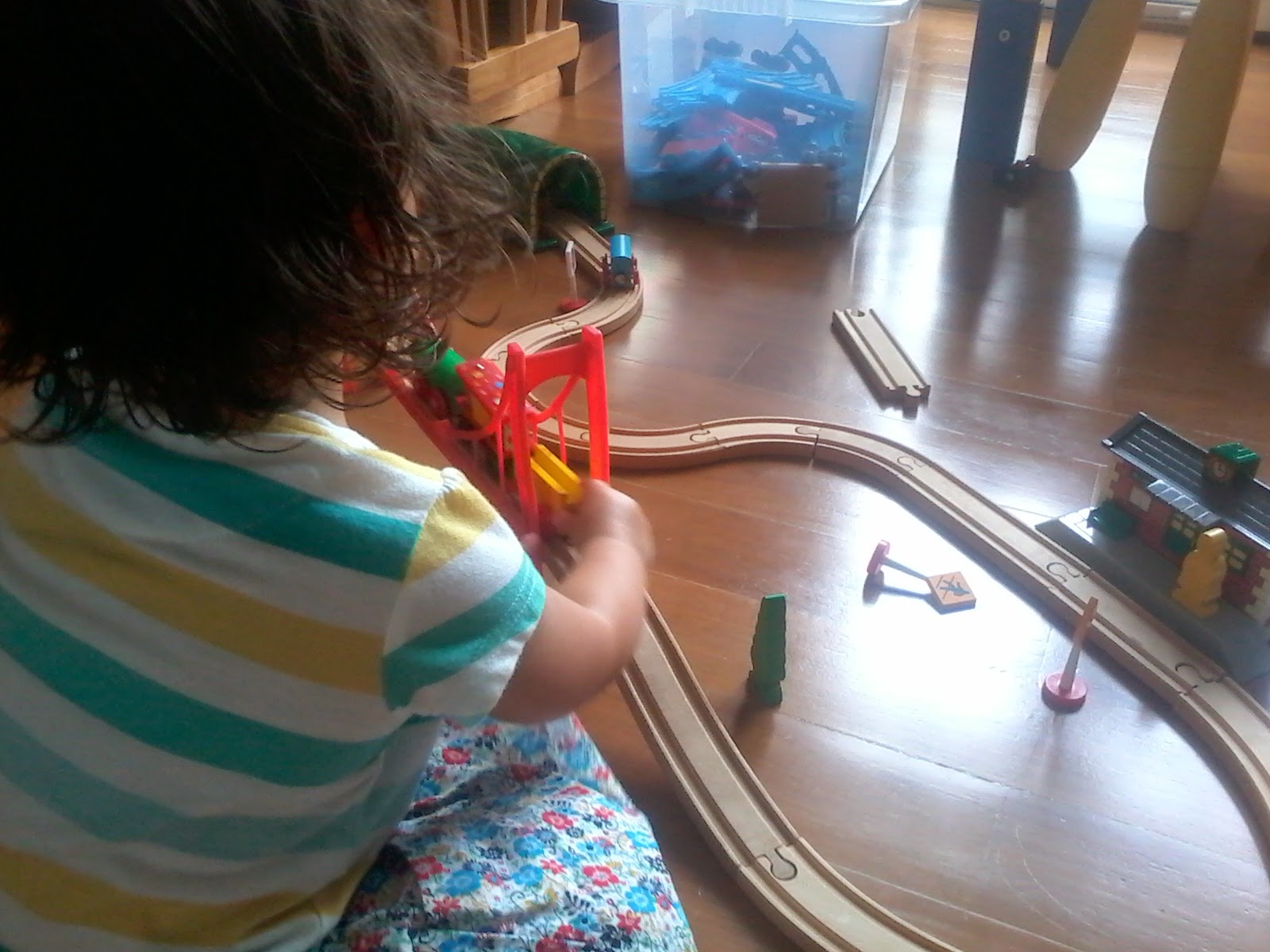