For unclear reasons, I have built up a mental picture that the introduction of multiplication is a major milestone, so I feel a bit of relief and surprise now that the moment has passed. Both emotions come from realizing that we already have been using multiplication (and division) concepts for some time!

Scaling
Scaling is one of the basic functions in pencilecode:

to make the turtle and its movements twice as large. From the first day we starting playing with the system, using this to blow up the turtle has been a favorite part of nearly every session. I think there is a lot of promising scope to operate turtles at different scales, compare their movement and compare the figures that they draw. I've written a simple program that I will show them tomorrow:
http://jgplay.pencilcode.net/home/scaleCompTurtles

For today, I was thinking about scaling drawings as a way to make this concept more physical.  I found a simple rabbit line drawing on the web and (using pencilcode again) made a little template for scaling up the picture: http://jgplay.pencilcode.net/home/gridDrawings. Jate mostly got the point, but I am planning to reinforce with several more simple figures: 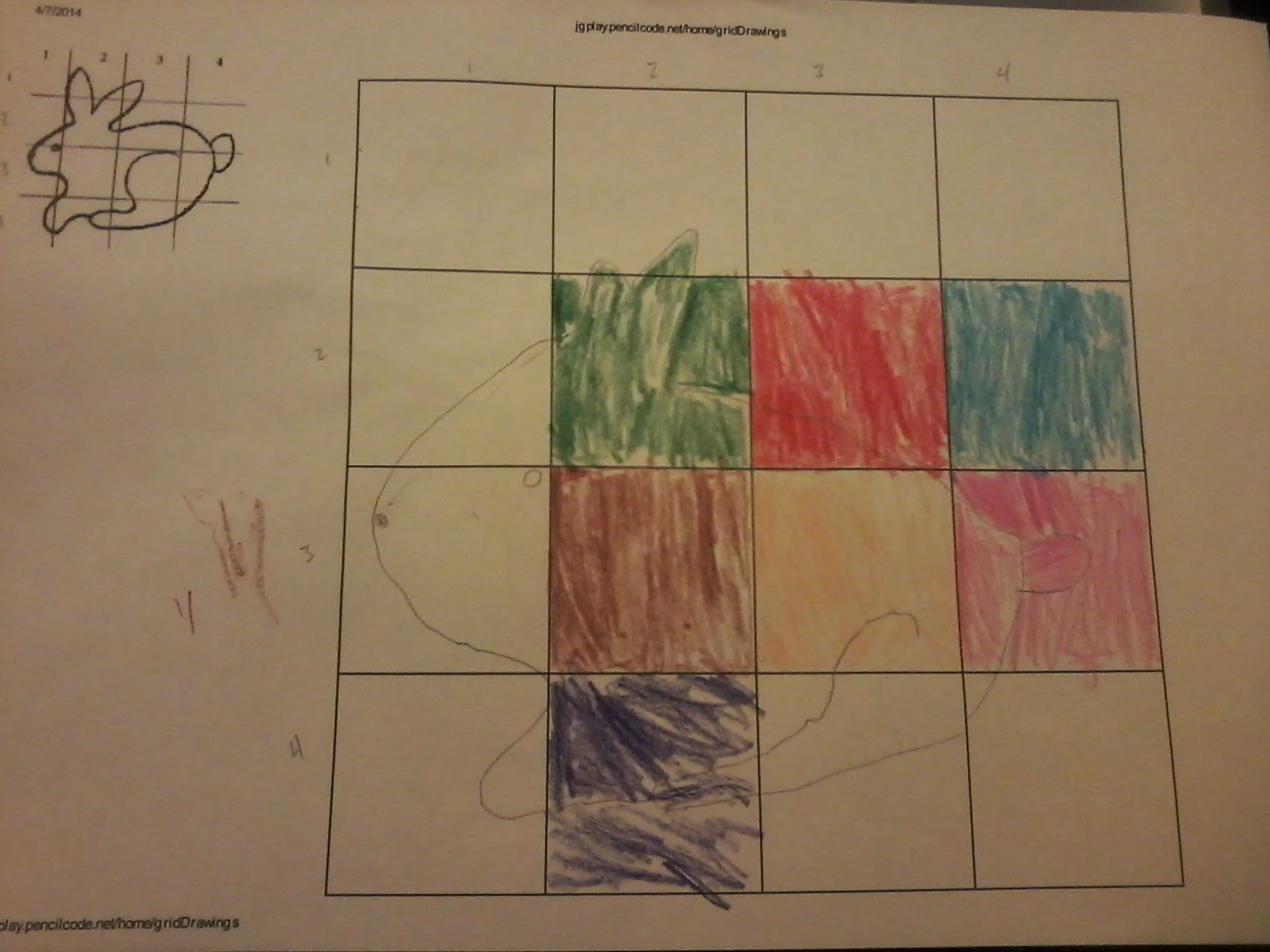 Repeated Addition
I have started going through the Mathematics Mastery module introducing multiplication.  The initial idea is to put together equal groups and practice telling number stories about them of the form: "3 blocks +3 blocks is equal to 6 blocks" and "2 groups of three blocks is 6 blocks" and "2 threes is 6."

We often do this type of thing with blocks, toy cars, grapes, pretzels, balls, tiles, little books, or anything else we have on hand.  Tonight, we started rather late, so I just drew a couple of pictures for us to discuss.  The page got thrown away before I could preserve it, but this was the sequence I followed:

(c) I drew 4 daisies, each with 5 petals and two leaves on the stems. I asked what number stories could be told about this picture, to which he wrote down 1x 4 = 4 and I filled in to complete "1 group of 4 flowers is equal to 4 flowers."  Then I asked how many petals were on each flower, Jate said 5 and then Jin wrote down 4 x 5 = 20.

(d) Naga picture.  I happened to have this picture on my phone from a recent visit to Chula University: 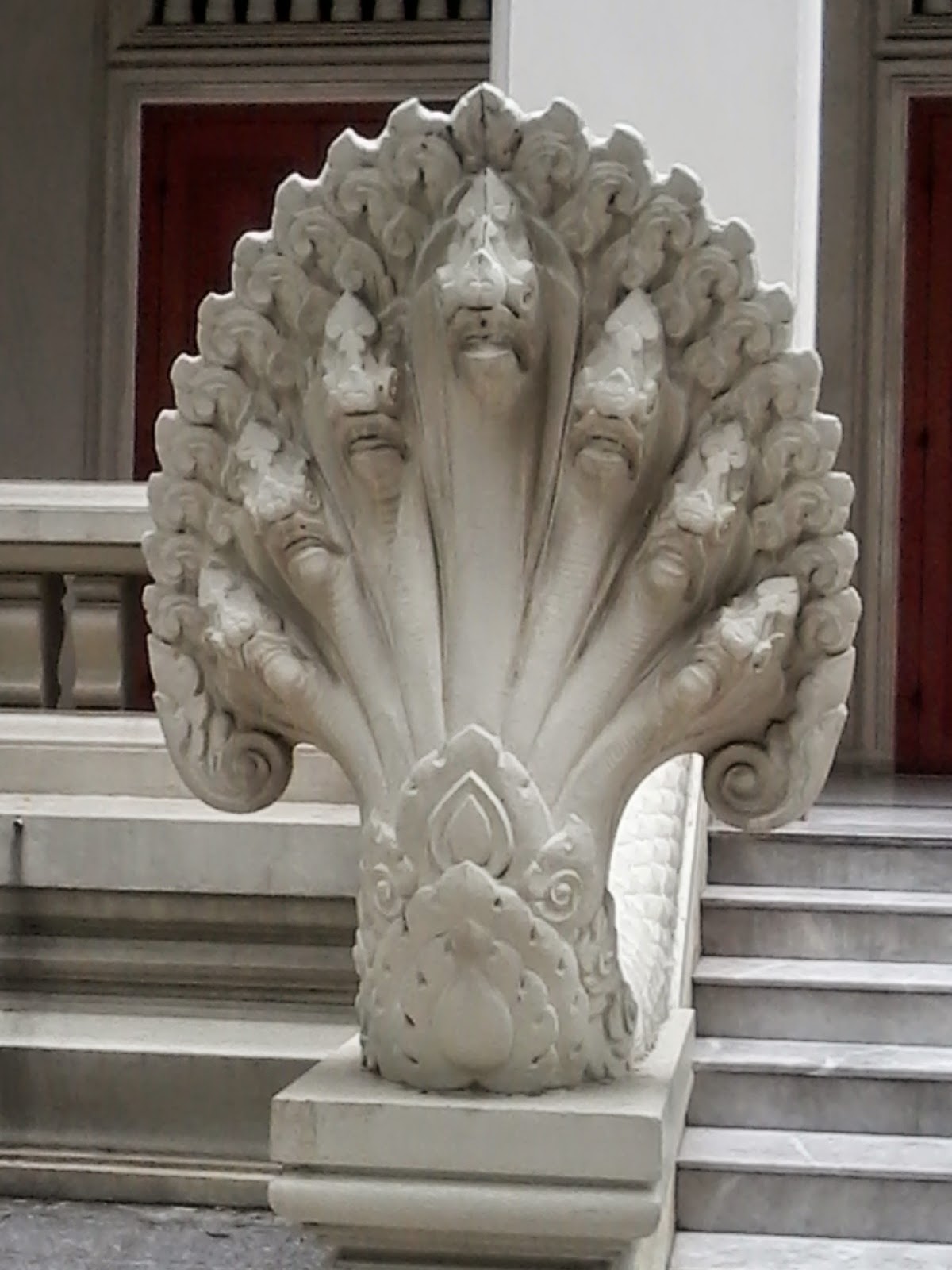 Though I showed it to the boys for non-mathematical reasons, of course one of the first observations was about how many heads the snake has.  Fitting in with the mathematical theme of the evening, I was pleased to show them this one next: 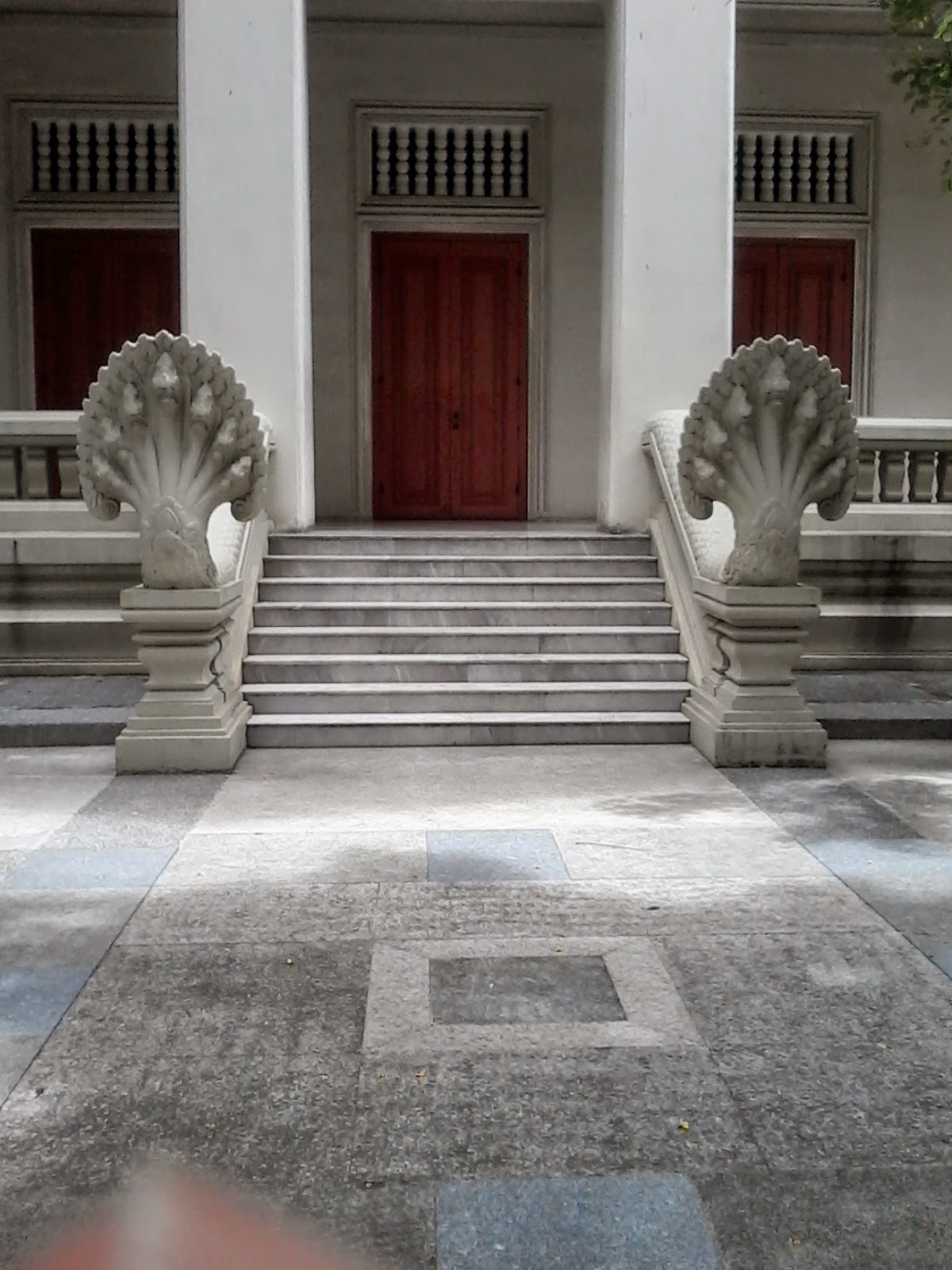 Unfortunately, I left the table at that point and a fight broke out over who had possession of our multiplication tables place mat: