As I noted in our kick-off post, I love games. There are educational benefits, but you will still get those if you are just playing for fun, so focus on the fun.  Even this can sometime be tricky with small children or kids at different developmental stages.  Below is a field report on a couple of games we played this weekend: Settlers of Catan and Robot Turtles.  If you don't know those games, skip below to the summary of the lessons we learned: 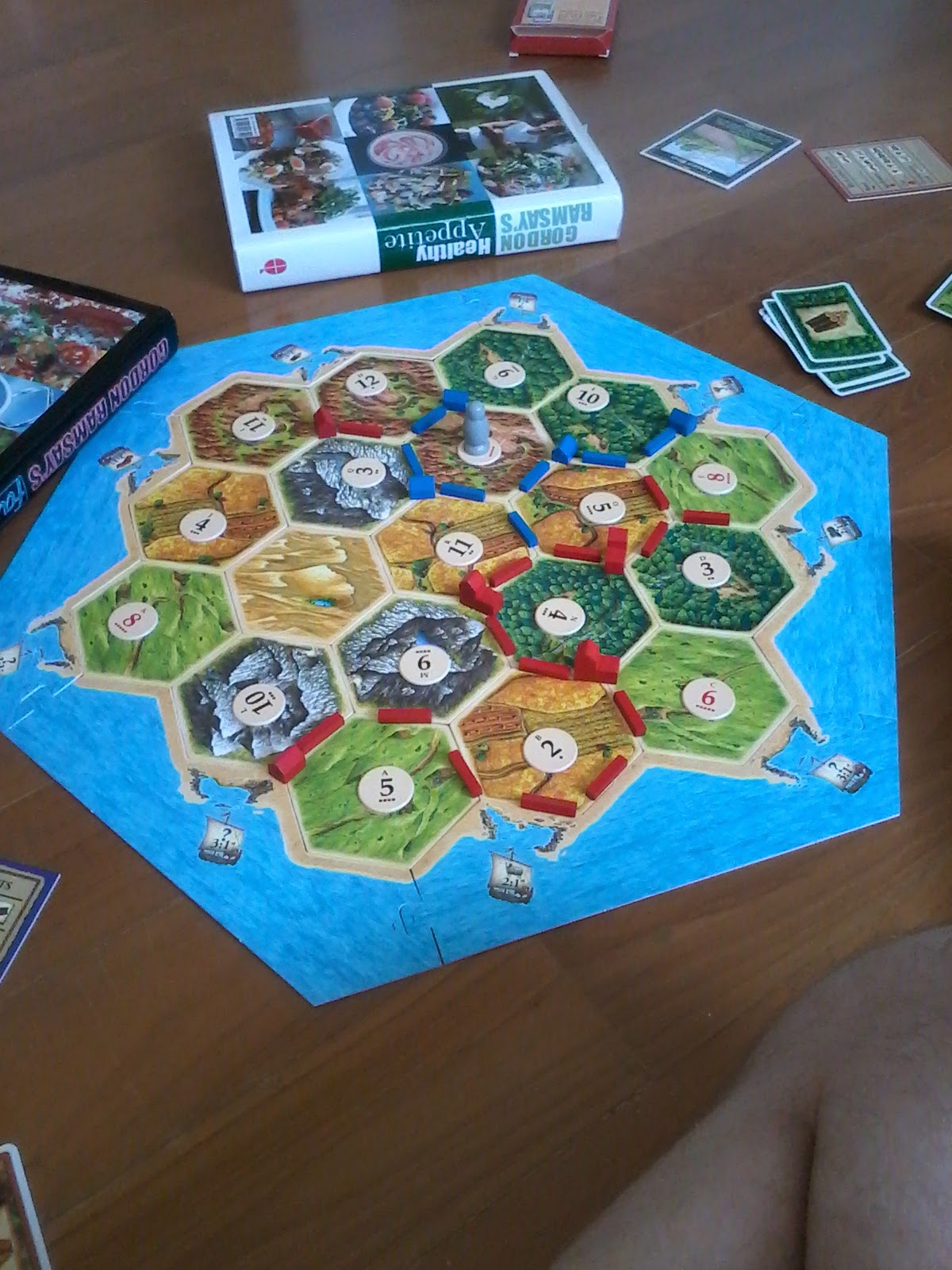 If you don't know the rules, it is sufficient to know that this is a dice and board game where each player is trying to acquire territory and build.  Players don't (usually) attack each other directly, so it feels more like a race.  There are a lot of little pieces and cards and play can easily take an hour. Play with someone to learn the rules in detail; if you are in Bangkok, come play with us!

Because of the time, patience required, and small board pieces, we usually play this when younger siblings aren't around. J1 and I took an opportunity when J2 and J3 were away to get out the board. I made two modifications when we played:

This set up was fun for both of us, though the game was slow to get going as we had such limited resources and his advantage was a bit too big.

For our next attempt, J2 joined the game. I thought the previous game had worked well and started them with the following advantages: J0 gets 1 settlement+road+3 resources, J1 gets 2 settlements+2roads+6 resource, J2 got one city+one settlement+2 roads + associated resources (which turned out to be 8 instead of 9 b/c he put one his settlement on a coastal vertex).

This game ended badly as J2 got "robbed" twice in a row (and I wasn't even applying the rule about taxing half the resources which would have made it worse).  Though he still had a huge advantage over each of us, the feeling of getting picked on was too much to bear and he had a meltdown.

SoC lessons for next time:
- Playing with particularly young children: take the robber out of the game. This removes the only opportunity for direct "attacking" play.
- Playing with young children: add extra settlements at the start of play, particularly to level out play between people with different amounts of experience and sophistication. By adding extra settlements, you cut down the early game phase where people are really just waiting to accumulate resources so they can finally build (or trade).
- Domestic Trading: for my J's, I will continue to play without trading among players.  If someone thinks of it spontaneously, I won't prohibit it, but I won't suggest it.
-  International trading: I'll consider allowing better trading ratios.  That will mean a player who misjudges and is completely locked out of one resource type won't be excessively disadvantaged.

Robot Turtles: http://www.robotturtles.com/
This is a board game that introduces programming concepts.  In retrospect, perhaps playing thsi a couple of times set up the boys for pencilcoding. Both have Logo as their original inspiration.

This time, J1 and I were playing ("turtle masters"), while J2 was the ("turtle mover.") This was okay for our first game, but there was a constant tension about who was actually moving J1's turtle.  That tension erupted in the second game when J1 moved my turtle (which was a clear violation of J2's responsibility).

As we were playing, I finally read the little instruction book associated with the game.  They have some useful suggestions about progressions to increase the difficulty as kids get the ideas of constructing programs. Also, they have some guidelines about how multiple players of varying sophistication can play together. Most importantly, though, they provide these guidelines about the role of turtle mover:


Can the Turtle Masters move their own turtles?

No. There are many reasons, but the best one is this: it changes the game from “kids bossing grownup around” to “grownup correcting kids’ mistakes.” That is guaranteed to kill the fun for everyone. Plus, once you let the kids touch the board, they’ll never want to go back to letting you do it.


Ok, so that's my lesson learned for robot turtles.

Overall Lessons:
These are all ideas I have on things to consider when I'm playing games with the kids in the future.  No absolute rules, of course:
- Consider whether the children are ready for games in which they are directly "attacked." While they may love stealing your resource cards or capturing your pieces, it often doesn't seem any fun when they are on the other side of the exchange.
- Make modifications to speed up the active phase of the game.
- Stop if someone isn't having fun
- Only introduce one or two items of strategy each game.  Let them learn how to play by playing
- When it is possible, give them a starting advantage so you can play your best and they will still have a slight chance of winning. In our house, this makes it the most fun for everyone and a great source of pride when they say: let's play with an equal start, Dad.
Posted by JGR314 at 7:01 AM