Drawing, While and Music (5th and 6th Grade Programming)

Who: Baan PathomTham 5th and 6th grades
Where: at school
When: Monday morning

Questions and observations from the homework
This week, the students had noticed two things. First, though everyone was asked to draw a triangle as part of the homework, all the versions were different. They've seen this before, but I really like to emphasize that there is no single right answer.

Second, Jung had been playing with message program from the homework and noticed: "it doesn't do anything!" We talked about what they expected would happen (it would write "Hello you" twice). Then I showed them the test panel, where the output from see gets displayed. For some reason, this panel is often closed, so it wasn't surprising that Jung didn't see any output. However, now, they got a surprise because the output still wasn't what they expected. That led us to talk about literal strings and variables and then do an example with write instead of see.

Challenge 1: A map puzzle
For our first challenge of the day, we used a program that Chunly wrote:

My question: can they make this same picture, but without the purple tail on the green dot?
Everyone completed this challenge, but, given the many ways to move the turtle and to draw something, they all had different approaches:


This simple example got us to experiment with several new commands: home(), pu(), pd(). Again, it reinforced the message that there are many paths to the target destination.


Challenge 2: A plum triangle
For the second challenge, we used Pitchee's triangle from the homework. She had created an isosceles right triangle through trial and error on the hypotenuse length:

For this challenge, we added scale 10 at the start of the program (to make all the drawing elements gigantic) and ht() at the end so that the turtle wouldn't block our view. Following this, we started discussing:
What did we notice? Why was it like that? What could we do to fix it? Is this a bug or a feature?
This is something we will continue next class.

Homework
For this week, the homework is to test out the code on the right side of this page: 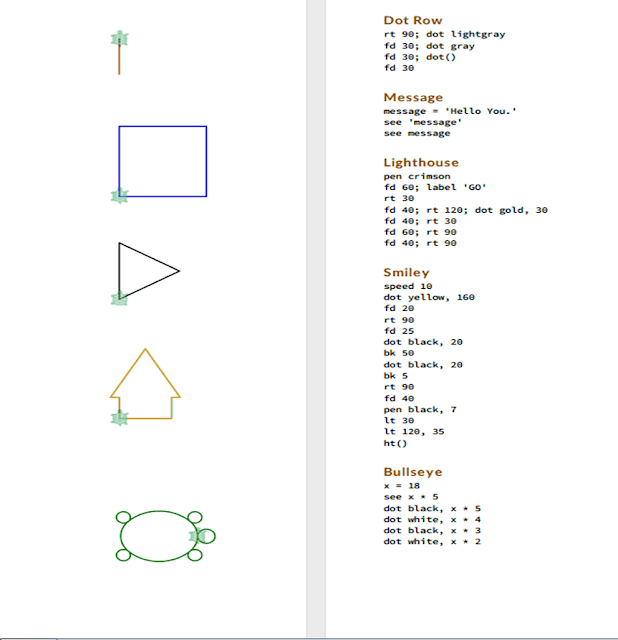 While we make music
Last week, students noticed the play command. I wanted to build on this by giving them more examples of ABC notation,  but I also wanted to review while and logic keywords if, and, or. In retrospect, this idea was too ambitious for one class.

Through a series of stages, I wanted them to think about how many times each line of music got played based on when and how often the conditions in the if statements were true. This was actually hard to tell and it would have been better to give them visual signals instead (or in addition).

I think we will have to return to these key words again next week. We will also discuss the guessing game that we've been writing.

Projects begin
Last week, the kids submitted outlines for their term projects. These are the ideas:


Homework
The homework for each depends on their project: