My condolences to everyone outside of Thailand, you are current missing some delicious pre-school math: Mangosteen! 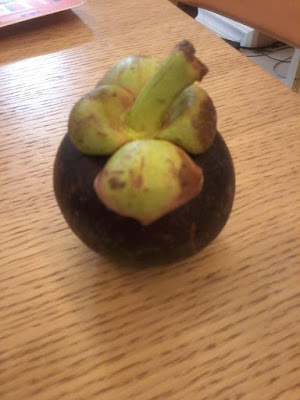 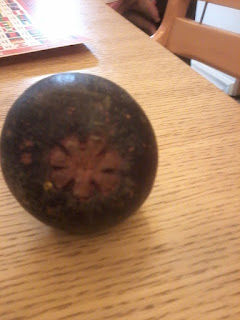 Just to trick you, this is a view from a different one, with 6 fruit sections. J2 has been using these to practice subitizing (recognizing number groups without counting them). J1 has just been gobbling down the mangosteen.

A dotty dice puzzle
In school for the 2nd and 3rd grades, we introduced a tic-tac-toe variation using dice where the winner is the first player to make a straight line that is a multiple of 5 (more notes here). For homework, the kids played this game with other multiples, in our case 6. During one game with J1, there was an interesting scenario that I saved to discuss with J2. The board has the numbers as marked and the player has just rolled a 4. Where should you play (you can add 4 to any cell of the grid, remember that you don't want your opponent to be able to make a multiple of 6 on their turn): 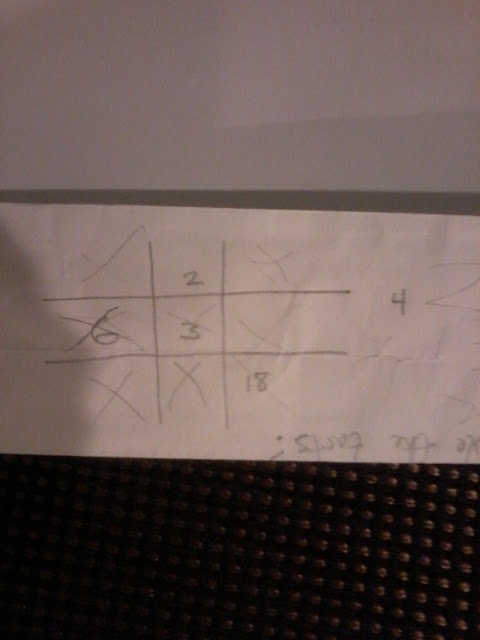 Race to 20
For J3, we modified one of the games that we had played in the 1st grade class last week. In this game, two players race to be the first to 20 on a 100 board. In this version, both player has a token/marker of their own. For each move, the players roll 2 dice and choose which value to move, then count up their position on the board. First player to 20 or more wins.

The strategy here is very simple, but it was a good game for J3 to start learning about dice and the 100 board. Once she got the point of the strategy, though, she had her own idea:"I'm going to add both dice together and move that amount!"

Snakes and Ladders experiment
J1 and I tried an experiment with snakes and ladders: a race between two different teams.
Team 1: a single marker that has to move according to the roll of one hexahedral die.
Team 2: two markers, the player can choose which one to move on each turn.
The winner is the player who gets a marker to 100.

Which team has an advantage? How big is that advantage? What if you play so that the winning marker has to land exactly on 100 (otherwise bounces back)?

SolveMyMaths recently tweeted about Knights Move (aka Razzle Dazzle.) Since we are always looking out for more/new games to play, it sounded interesting. Also, we could repurpose existing material to play. The game is a cross between chess and basketball. Below, see J1's set-up: 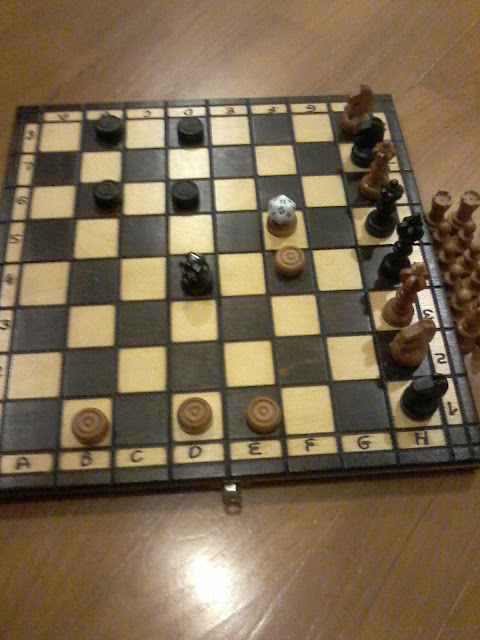 Yes, we are using icosahedral dice as the balls. Also, the chess pieces on the side are spectators, they aren't part of the action (since this is played on a 7x8 board).

One of the most interesting parts was our ability to experiment with rules. Since we didn't have a definitive version, we felt free to try slight modifications. In particular, we experimented with: