Is John a liar? and other good puzzles

who: J1 and J2
what did we use: Smullyan's Alice in Puzzle Land and some online games
when: after dinner
This post is basically a thank-you to all the people who create wonderful books, puzzles, and games. Also, thanks to the people who spread the message by telling us about these resources. In this case, we're directly indebted to A O Fradkin, Annie at the Math Forum, Mike Lawler for these specific activities.

The title of this post comes from one of the opening puzzles in Smullyan's book of logic puzzles: Alice in Puzzle Land. Here's how it goes:

What if we want to figure out whether John always tells the truth or always lies, what single yes/no question can we ask one of the brothers to determine this?

To be honest, I didn't get the answer, but J2 managed to figure it out after they posed a bunch of questions and we worked through the possibilities together, example "what if the one we are asking is John and he tells the truth?"

The Js (mostly J1 and J2) have had a lot of fun discussing this particular challenge and have also really enjoyed the tart-ingredient thieves series. They are currently working on the "very complicated logic puzzle" at the end of the first chapter to determine whether the Gryphon or the Mock Turtle was the tart thief.

Since we started teaching the math games class at school last year, I have had a strong bias away from on-line games and puzzles. Part of this is simply that we wouldn't be able to use these puzzles in the class, but also because I wanted to help parents see that they don't need any special tools to help their kids have deep mathematical experiences.

Anyway, the SolveMe Mobiles and Game About Squares (below)  helped me recognize and reject this bias!

The mobile puzzles are from EDC, a group with which I am not affiliated, but which I hold in high regard. Each puzzle gives you a balanced mobile that, secretly, codes equations to solve for the weights of the various shapes. J2 (5yrs old) has especially enjoyed this and has just finished puzzle 51: 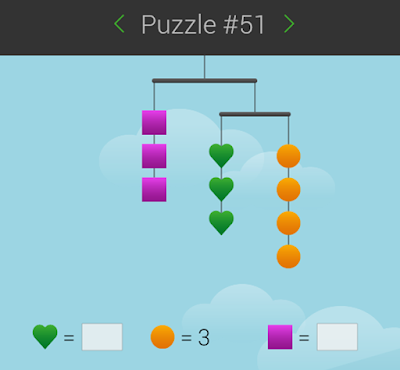 Even J3 (3yrs old) has gotten something out of this puzzle. She was looking at the screen and we (J0, J1, J2) asked: what do you see, what do you notice, what do you wonder (not all at once.) She talked about shapes, she talked about how many, she asked questions about what different things meant, she tested putting numbers into the blanks.

Another cool puzzle: Game About Squares. I don't know who to thank for creating this and making it freely available, but it was part of a really nice Notice and Wonder post by Annie which is, itself, great and you should go read it. In the spirit of the game, I'm not really going to tell you much about it, just go play! 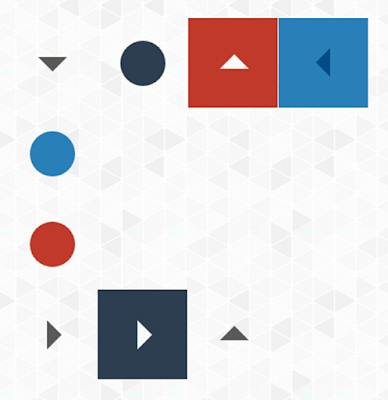