Who: J1
When: before bedtime
Where: bedroom
Several months ago, I wrote a post (here) about various sharing problems and the difficult question: "What is fair?" I got distracted until I found some ready-made examples from Peter Liljedahl. J1 and I discussed his Goody Bags scenario last night.

Though it seems simple or childish, I found this activity stimulated a rather deep conversation and was really effective. I highly recommend other parents try it.

In a nutshell, you have these 40 gifts to distribute among 5 friends and want to make the distribution fair: 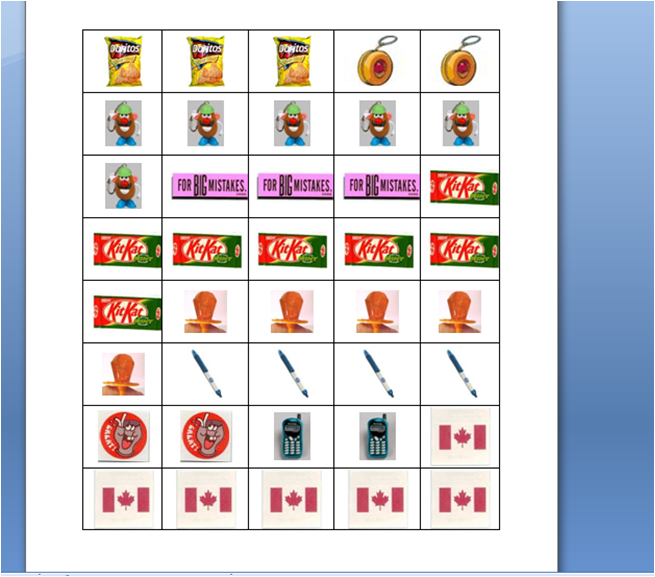 J1 cut out all of the pictures, spent a couple minutes putting them in piles, then we arranged them and talked about whether the allocation was fair.  Each rough column below is a goody bag: 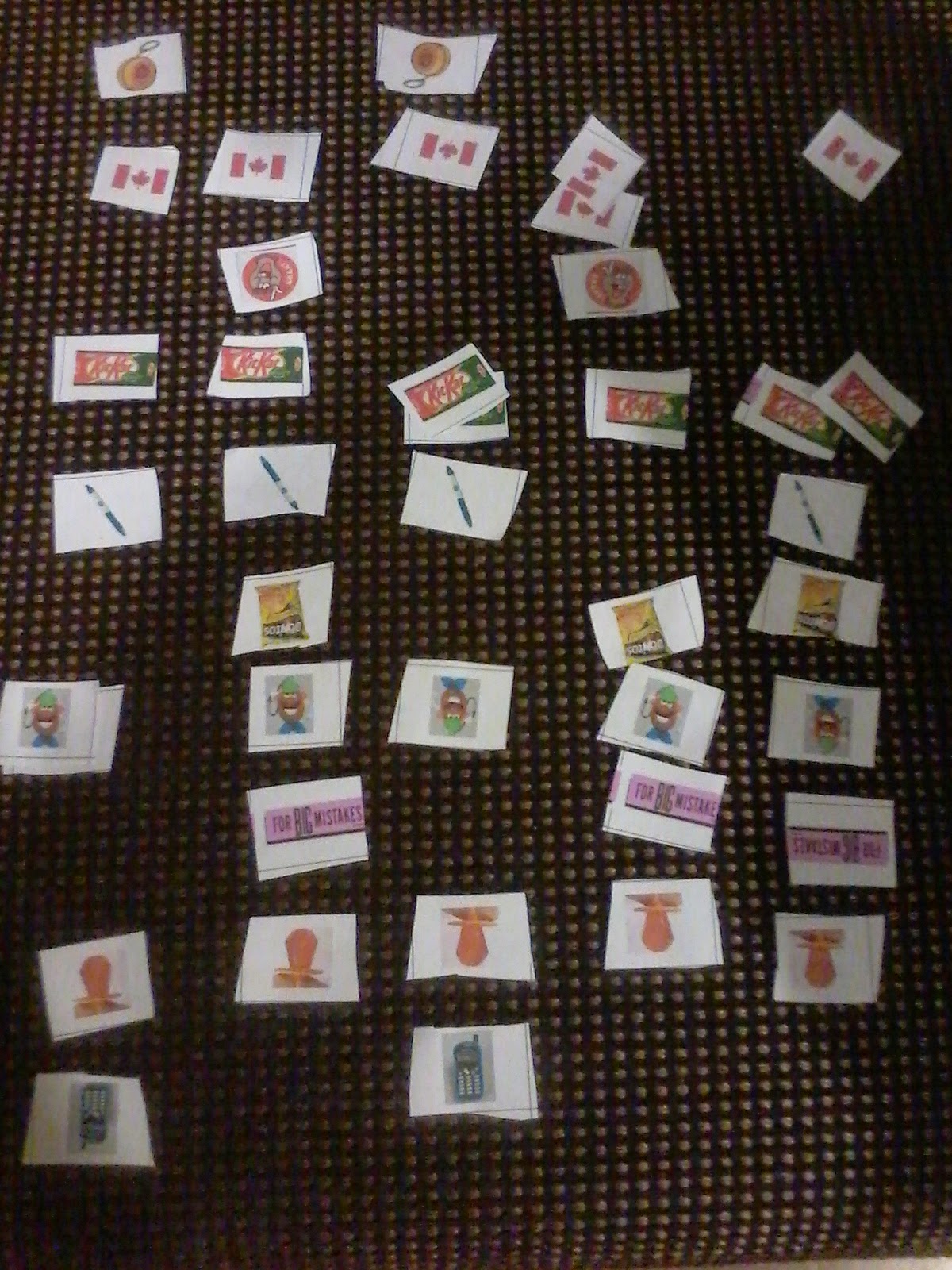 When discussing, we didn't start with them all in a grid, but worked a column at a time, starting from the right.  that means we had two goody bags out and compared them against each other.  J1 naturally came to the arrangement that put common items side-by-side and he was careful to leave spaces where one bag got something that was missing in the other.

As we discussed, he was pretty clear that the common items weren't relevant to deciding whether the two goody bags were fair, we only needed to look at the differences. When talking about comparing unlike objects, he tended to focus on how permanent they would be and compared the difference baskets rather than individual objects within them.  For example, the two rightmost bags differ by +tatoo+sticker - kitkat - gel pen. He judged this fair because the kitkat wouldn't last long, the gel pen was nearly permanent while enjoyment of the the tatoo and sticker would both be moderately lived.

At each step, we compared the new goody bag to the single preceeding goody bag that was most similar.  Eventually, J1 proclaimed that he was satisfied with the distribution and didn't really have a preference between any of the goody bags.

We talked about some of the characteristics of his division:

This process gave us a very different result (not pictured) where most of the previous characteristics were violated:


Everyone still got the same total number, but it was hard to call this split "fair."

We had a good discussion about why the results were different. This included a really interesting idea: if the process used to divide the goodies was "fair," then maybe the ending distribution is fair even if it doesn't look right.  Essentially, he was defending randomness and arguing that everyone had an equal chance to get any particular goody, so the opportunity was fair. This was a pretty sophisticated idea that I hadn't expected to hear. I think our experiment of dealing goodies in a circle vs the line method also demonstrated that apparent randomness can be thwarted with subtle systematic biases, another rather deep idea.

We moved on to discuss whether he had any personal preferences among the items. He ranked them as below, most favored on the left and least on the right. Items that are stacked are considered equal and there is some sense of spacing. 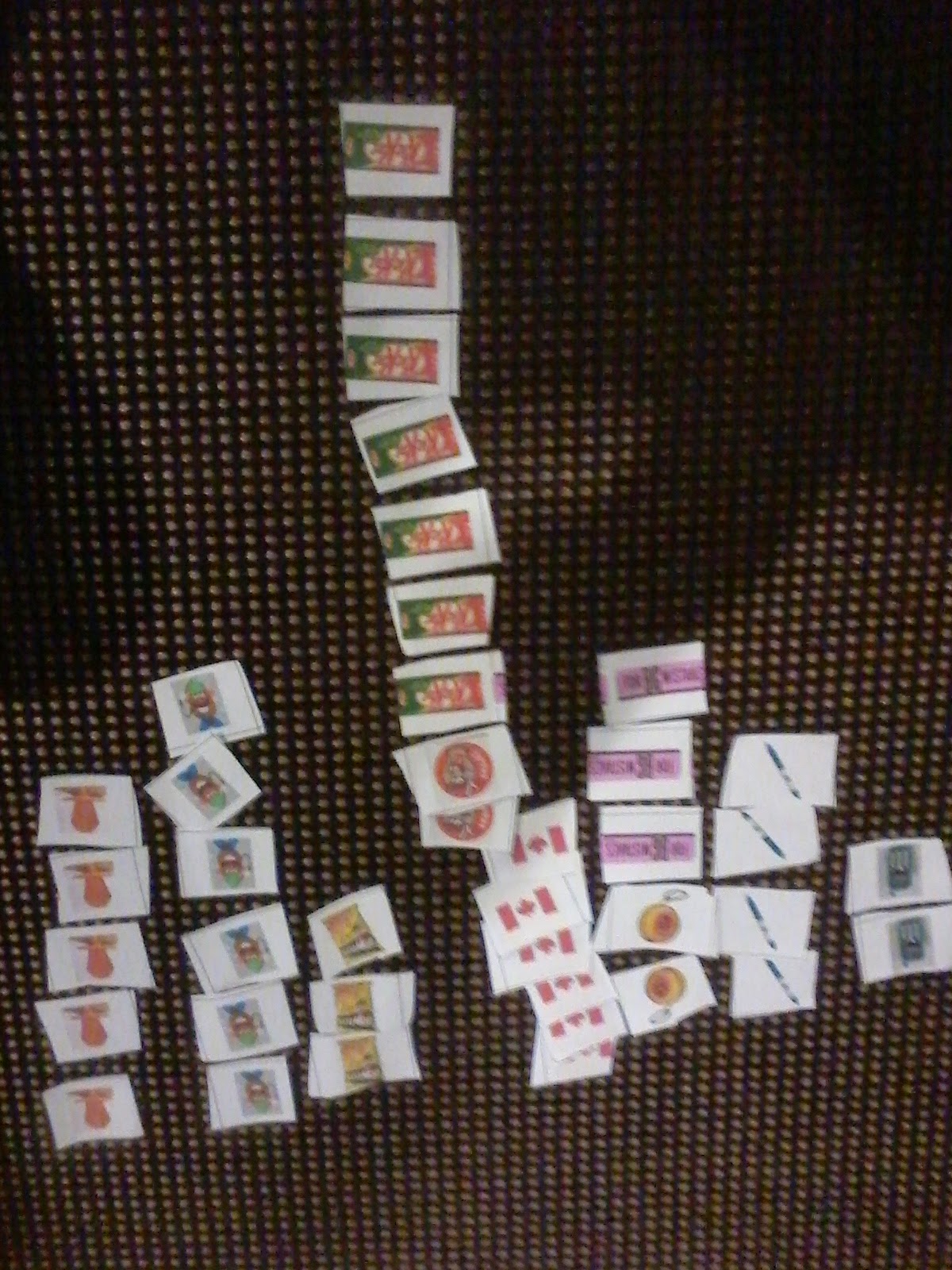 Lastly, he revealed that he had 3 strategies for attacking this challenge, to be employed sequentially, if needed:
J1's closing comment
When we were all done, I told J1 I was glad we had finally done this sharing challenge. He looked up and said: "oh, this is what you meant! When you said we should do the sharing challenge the other day, I thought you were going to make us share our actual toys, that's why I didn't want to do it."

J2's observation
J2 and I talked a little about this investigation. His solution was simple:

He declared this fair because everyone got the same number of items and was entirely unperturbed by the idea that, for example, someone would get 5 potato-head keychains. So, maybe the conversation won't be deep with every child. Or, this indicates stages of maturity in thinking about what fairness is?
Posted by JGR314 at 7:12 AM