Who: J1, J2, and J3, mostly engaged on separate activities (J0 and P supporting roles). Note: All activities were done together, so there is cross-talk and listening, even if I only talk about one major protagonist in each activity.
When: throughout the day (no school, so all are at home the whole day)
Where: mainly in our reception room
School is out and new year festivities are all around us. Lest you think we have been (mathematically) idle, here are some notes of how we've been keeping busy recently.

We have a little duck sorting game, given to us years ago a by a cousin. Put the ducks on the blue escher-stream and then take turns trying to collect all of  your tribe with common belly markings. 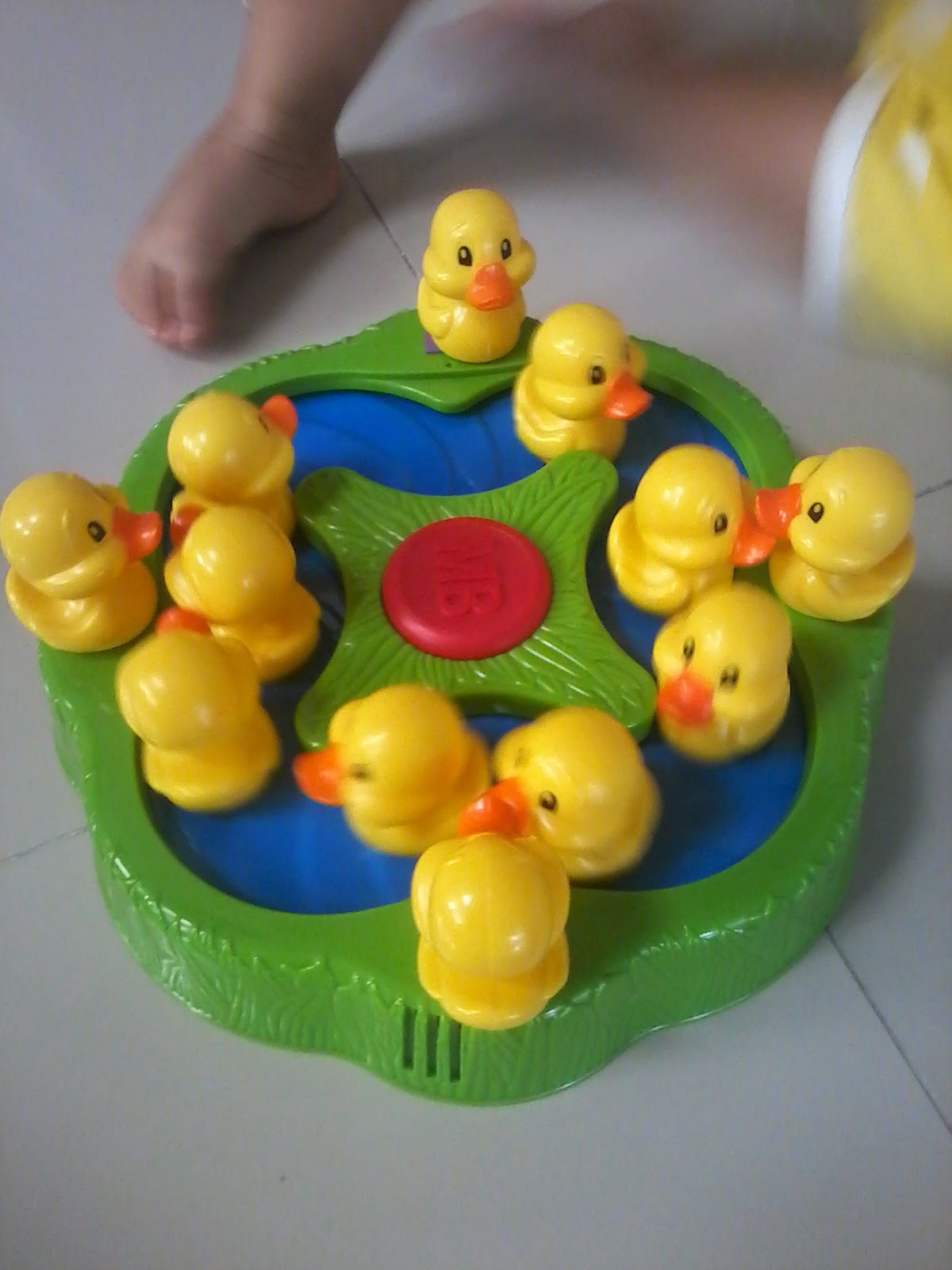 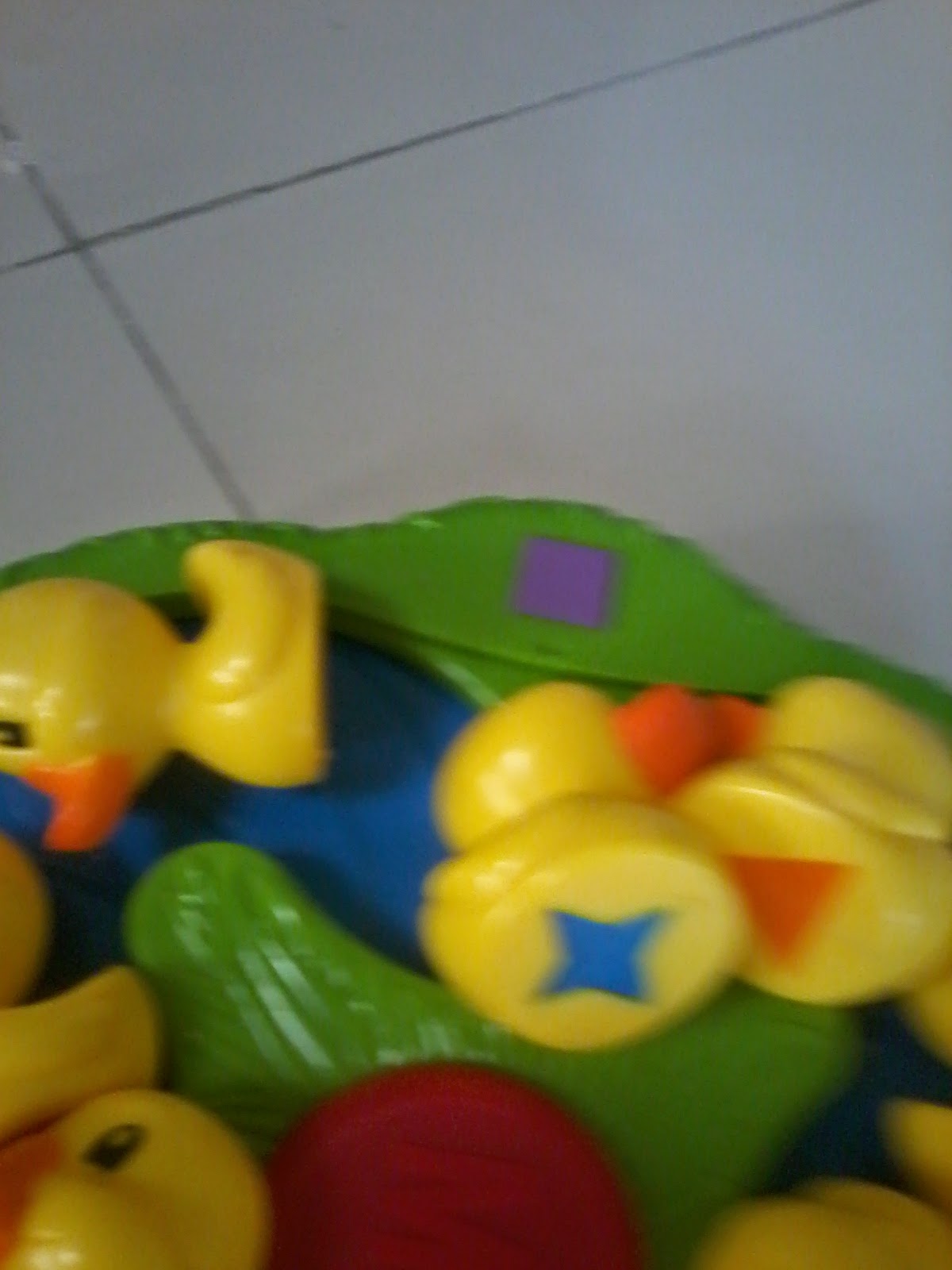 How many ducks are there? How do you count them when they are "swimming" on their stream?

For J3, this is quite a challenge to count all the ducks when they are in motion. She is still at the stage of counting individual objects (in contrast to recognizing clusters) and then she isn't able to keep track of which have already been counted.

Since there are a nice number of ducks, we take turns grouping them in various different ways and talking about the shapes on their bellies.

You may have noticed I created a new page of Upcoming Activities. This is where I keep notes for things I want to remember to do with the kids. True to the promise of that page, J2 and I looked at regular polyhedra and folding. These were inspired by these posts: 3d-2d and Nets&Decorations.

Tetrahedra
Starting simple is always good.  So what arrangements of 4 equilateral triangles are there? Which of these fold to a tetrahedron?

J2 found three ways to arrange 4 equilateral triangles into a contiguous polygon. Two, on the right, fold into tetrahedra while the one on the left doesn't (but is useful for making a square pyramid). 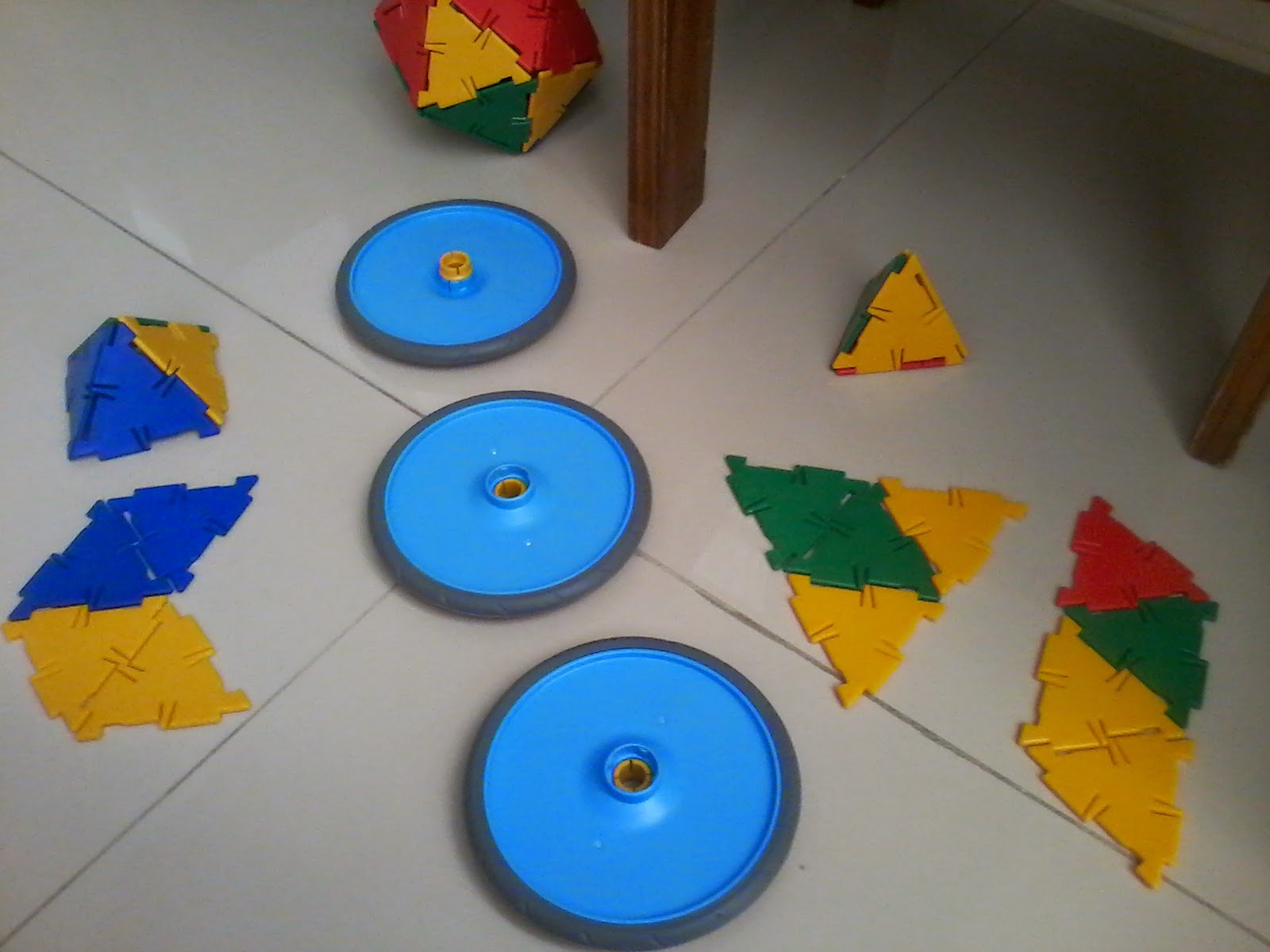 I asked him how we could tell that the three arrangements were really different. Of course, this is a strange question because we can clearly see that they aren't the same, but I persisted and asked how we can be sure that no rotation, translation, or flip will get them to be the same. We talked about this for a while and eventually came up with two ideas:


In the course of discussing how many sides, someone said that one arrangement had 13 sides. I asked them to figure out why that couldn't possibly be correct (4 triangles have 12 sides when they are separate, putting them together can only reduce the number of sides).

Hexominoes/Cubes
Ok, done with tetrahedra, we moved on to cubes. What arrangements of 6 squares fold to a cube? Which don't?

We identified the longest line of squares in our arrangement as an interesting characteristic to classify and called it the "spine." We had 6-spines (just one), 5-spines, 4-spines, 3-spines, and 2-spines. For example, the picture below shows a 2-spine that does fold into a cube 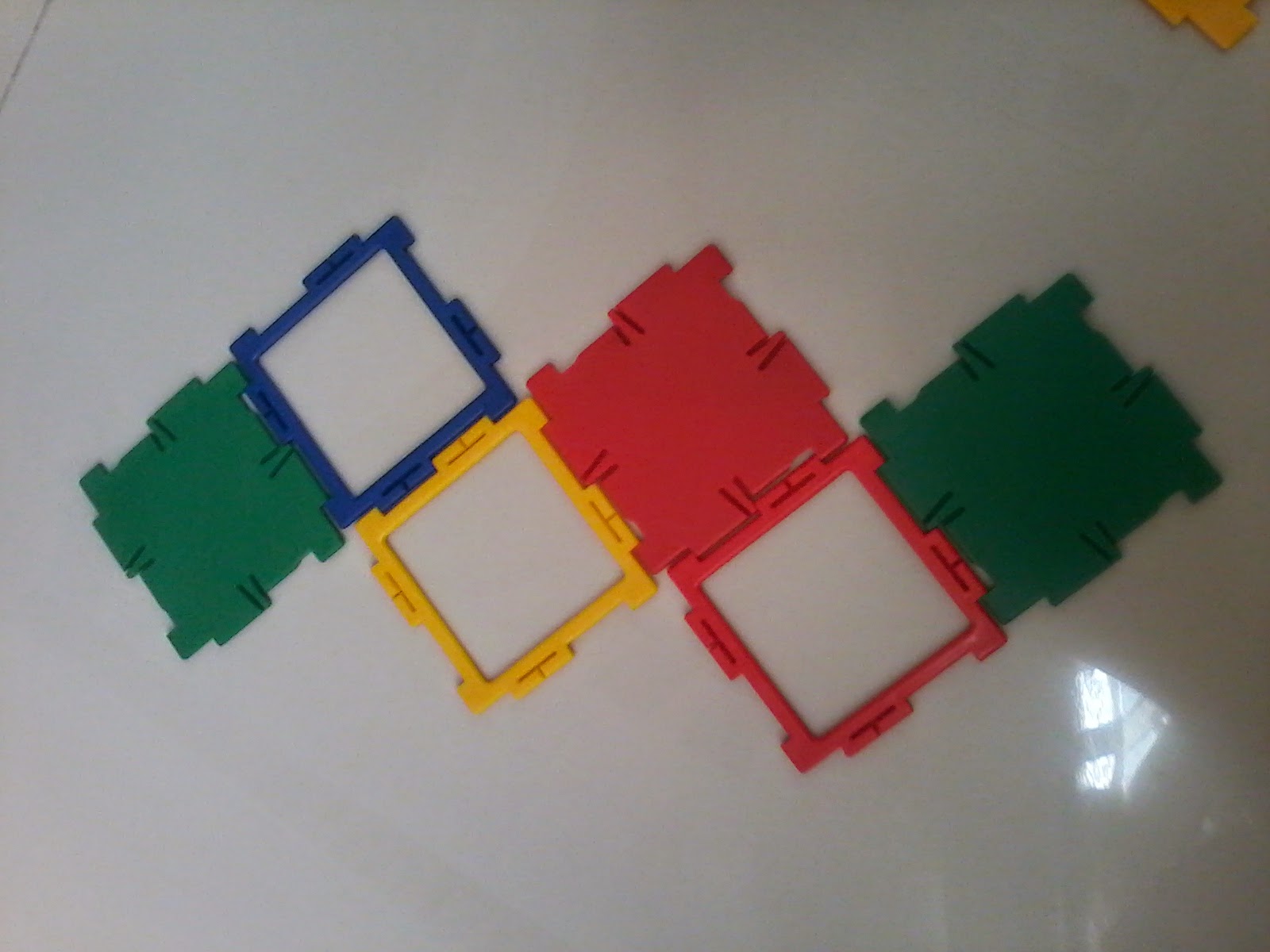 It was fun seeing when J2 would realize that an arrangement did or didn't make a cube and hear his reaction. We talked a bit about how we would know whether we had tested all of the arrangements, but I won't claim we were comprehensive in this exploration. He did develop one hypothesis about 4-spines:


If both "tentacles" of a 4-spine are on opposite sides of the spine, it can fold into a cube. If they are on the same side, it cannot.

Pictures below are our cubable hexominoes and the ones that just don't work out: 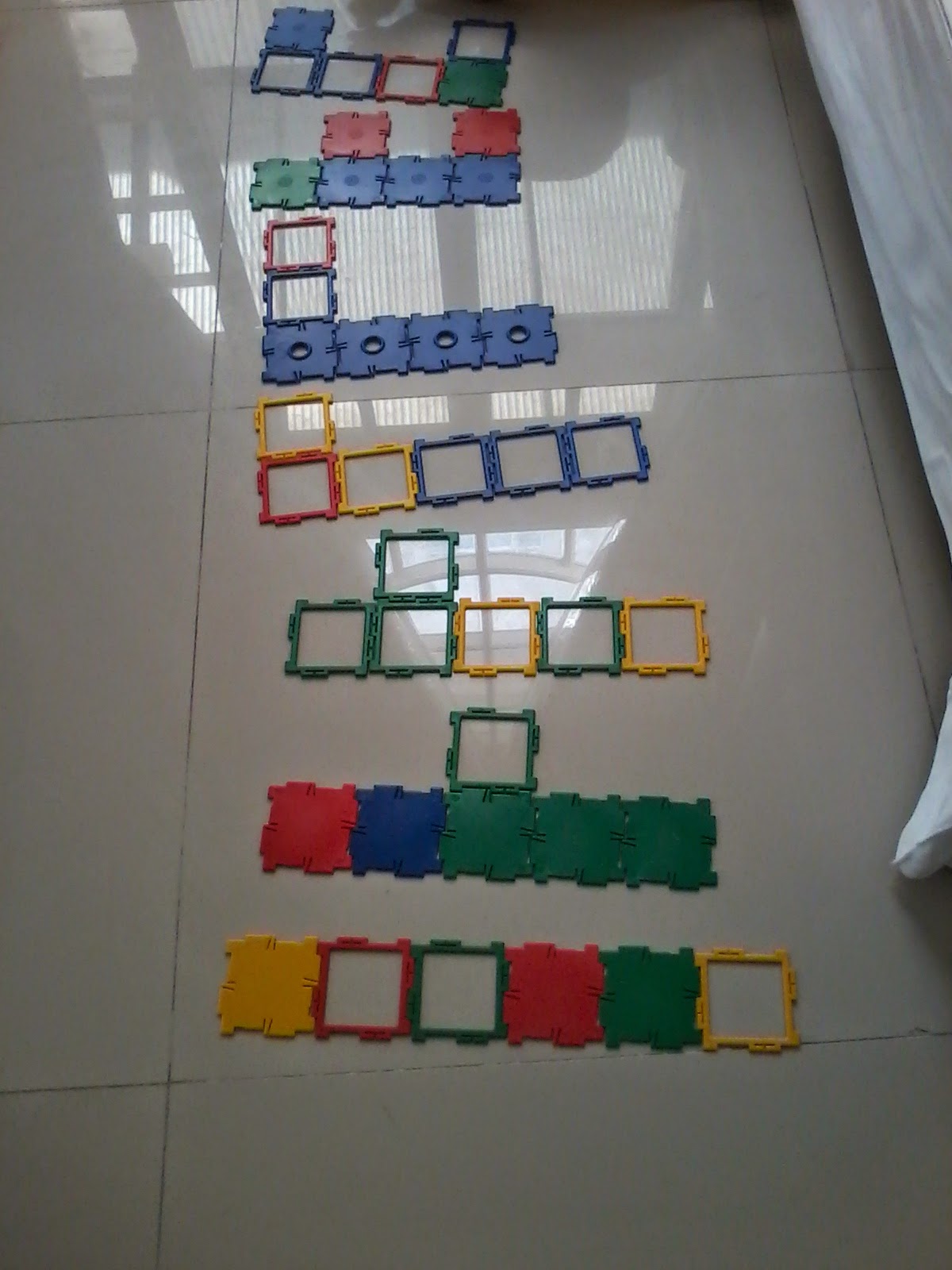 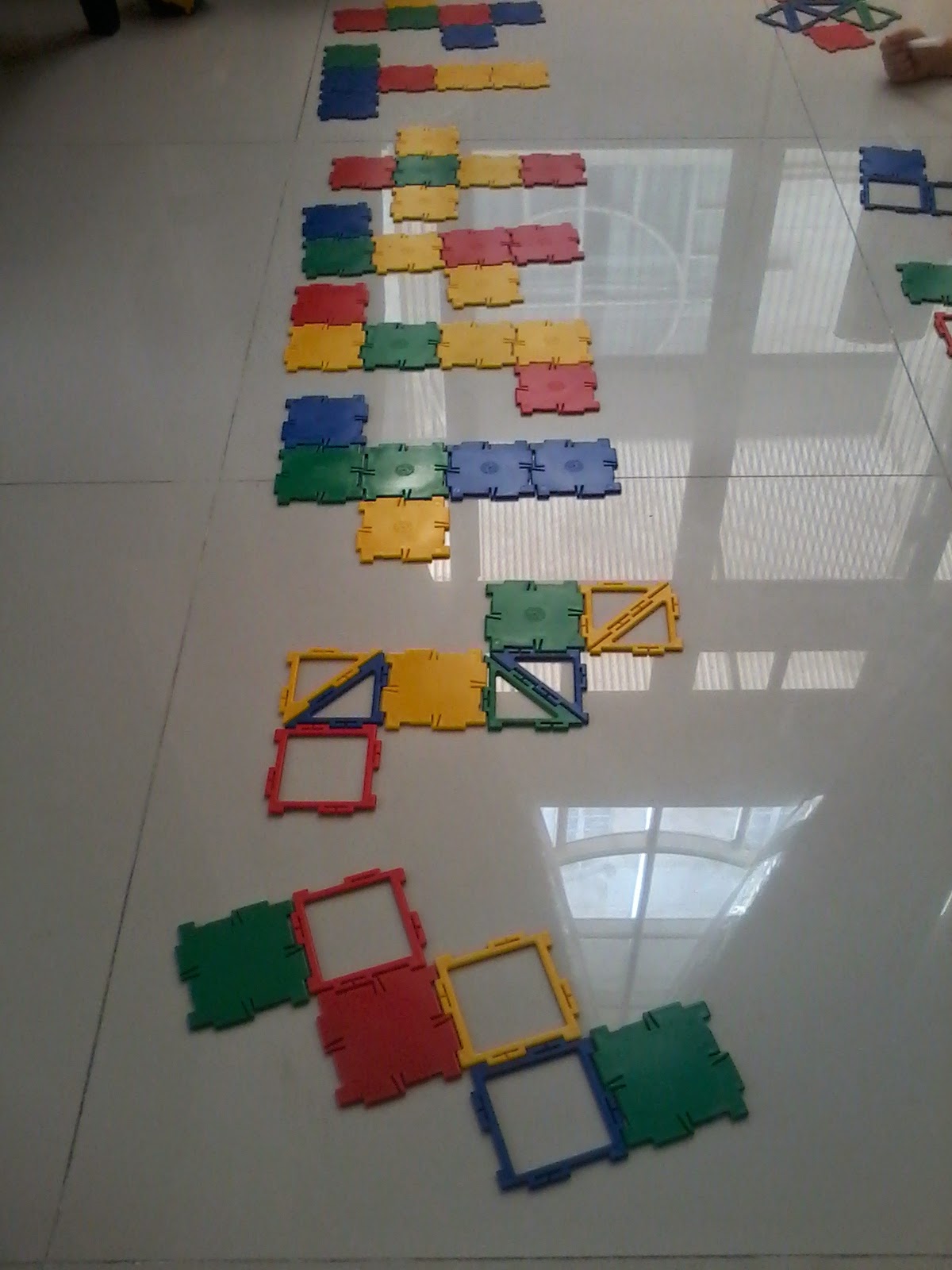 At the end, I tried to rearrange things and start talking about pentominoes, but this exploration was already as long enough and he was ready to move on to something else.


How fast do Fibonacci numbers grow?

Both J1 and J2 have recently been introduced to Fibonacci numbers, powers of 2, squares, and cubes. Writing down the Fibonacci sequence, J1 said: "these are growing really fast!" I asked J1 and J2: "do they grow faster than squares?"

This led to a discussion about what my question meant. J2 pointed out that, at the beginning, the squares are growing faster. Very detail oriented he pointed to the first two Fibonacci terms (1, 1) and said "they aren't even growing at all." J1 pointed farther down the sequence and said it looked like they were much larger at some point.

Here, J2 went off to do something else while J1 and I continued talking about the sequences relative to each other. I built a simple spreadsheet and then asked what we should do to compare. Some discussion later, we decided to add the ratio of the sequences and the difference. Through both measures, we saw that, indeed, the Fibonacci sequence becomes much larger than the squares. One little observation he really liked was seeing that the twelfth Fibonacci number (144) is also the 12th square, so the sequences are equal at that point.

J1 then suggested other sequences we could compare: multiples of 100, powers of 2, powers of 3, powers of 10. We did a little to play around with powers of bases between 1 and 2, but we didn't quite get to reveal the magic of the golden ratio.  At least not this time . . .

J1 and I, with occasional visits from J2, have been reading The Number Devil together just before he goes to sleep. Frankly, this was a book toward which I was only lukewarm. Mainly, I wasn't sure about how our kids would take the introduction about nightmares, the relationship between the number devil and Robert, and the negative comments about the math class and math teacher. As it turns out, all of these things are fine, either not taken too seriously or accepted as proof that Robert is a bona fide little boy.

On that last point, J1 was much more attuned to the fact that Robert is supposed to be 12 years old. When we got to a point in the story where the Number Devil asks Robert when he was born (answer: 1986), J1 immediately spotted something was wrong. He didn't know right away how old Robert was, but he had a sense, perhaps from knowing roughly when the 5th graders in his school were born? We spent a bit of time calculating how old Robert would really be in 2014 and then talked about what happened with his age in the story.

Otherwise, I'm finding that most of the math in the book is at just the right level. Mostly, we are reading about things that J1 and J2 have already encountered and they enjoy seeing a slightly different spin on these topics (including silly names for them). We do most of the calculations along with the characters and generally have a grand time.
Posted by JGR314 at 7:02 AM